Listen to this article
2022-11-23T21:32:58Z
A Walmart employee killed six people and wounded several others before fatally shooting himself at a store in Chesapeake, Virginia, authorities said on Wednesday, in the latest episode of gun violence in the United States.

A manager at a Walmart Inc (WMT.N) store in Virginia opened fire on fellow employees in a break room, killing six before turning the gun on himself, eyewitnesses said on Wednesday after the country’s latest mass shooting.

The gunman, identified as Andre Bing, 31, of Chesapeake, Virginia, said nothing as he began firing on workers gathered late on Tuesday ahead of their overnight shift, according to two employees who were in the break room.

“I just watched 3 of my coworkers/friends be killed in front of me,” Donya Prioleau wrote in a Facebook post. “Andre killed them in cold blood…I cannot unsee what happened in that break room.”

At least four others were wounded in the attack, which took place while about 50 people were inside the store.

Authorities say they were still investigating what may have motivated Bing, who came armed with a single handgun and multiple magazines of ammunition. The city said its SWAT team had executed a search warrant at his house.

“Detectives are working to learn more about the shooter’s background and what may have motivated the shooting,” the city said in a statement.

Another Walmart employee, Briana Tyler, told ABC’s “Good Morning America”: “I looked up and my manager just opened the door and he just opened fire.”

Several co-workers of Bing told CNN he had exhibited strange and sometimes threatening behavior in the past. He also made paranoid comments, expressing concerns the government was monitoring him, according to CNN’s interviews.

Coming on the heels of the killing of five people at a Colorado Springs LGBTQ nightclub on Saturday, the latest massacre prompted a fresh round of condemnations by public officials and calls by activists for tighter gun control.

U.S. President Joe Biden on Wednesday called the shooting “yet another horrific and senseless act of violence,” noting a shooting earlier this month that left three University of Virginia students dead.

“There are now even more tables across the country that will have empty seats this Thanksgiving,” he said in a statement.

Bing worked for the company since 2010, most recently as an overnight team leader at the cavernous Walmart Supercenter just off Battlefield Boulevard in Chesapeake, a city of about 250,000 residents just south of Norfolk.

Jessie Wilczewski told WAVY-TV that she hid under a table and the shooter pointed the gun at her and told her to go home.

“It didn’t even look real until you could feel the pow-pow-pow. You can feel it,” the store employee said. “I couldn’t hear it at first because I guess it was so loud. I could feel it.”

Tuesday’s bloodshed marked the latest spasm of gun violence in the United States, where an average of two mass shootings – defined as an incident killing or injuring four or more people – occur every day, according to GunViolenceArchive.org.

Virginia Governor Glenn Youngkin, who was already facing stepped-up calls for policies to address gun violence after the University of Virginia killings, ordered flags at local, state and federal buildings to be flown at half-staff.

Kimberly Shupe told WAVY-TV that her son Jalon Jones, 24, was stable after being shot in his ear and back. He told her that during the nightly meeting his manager was acting “strange” and “then started shooting,” she told the news station.

Dr. Jessica Burgess, a surgeon who treated victims at a Norfolk hospital, said she had contacted a colleague in Colorado Springs just two days prior to offer support.

“So it’s very disheartening that I’m now in the same position with my colleagues from across the country checking in on me and my team,” Burgess said. “Sometimes there is only so much we can do when the injuries have already been done.”

This was not the first mass shooting at a Walmart, which has thousands of stores across the country.

In August 2019, 23 people were killed in a mass shooting at a Walmart in El Paso, Texas near the U.S.-Mexico border in an act described as domestic terrorism by law enforcement. It was also the deadliest attack on the Hispanic community in the United States in modern times.

Walmart enacted new restrictions on gun and ammunition sales following that 2019 shooting, as it had during prior shootings at its stores.

“The devastating news of last night’s shooting at our Chesapeake, VA store at the hands of one of our associates has hit our Walmart family hard,” Walmart Chief Executive Doug McMillon wrote in a LinkedIn post on Wednesday. 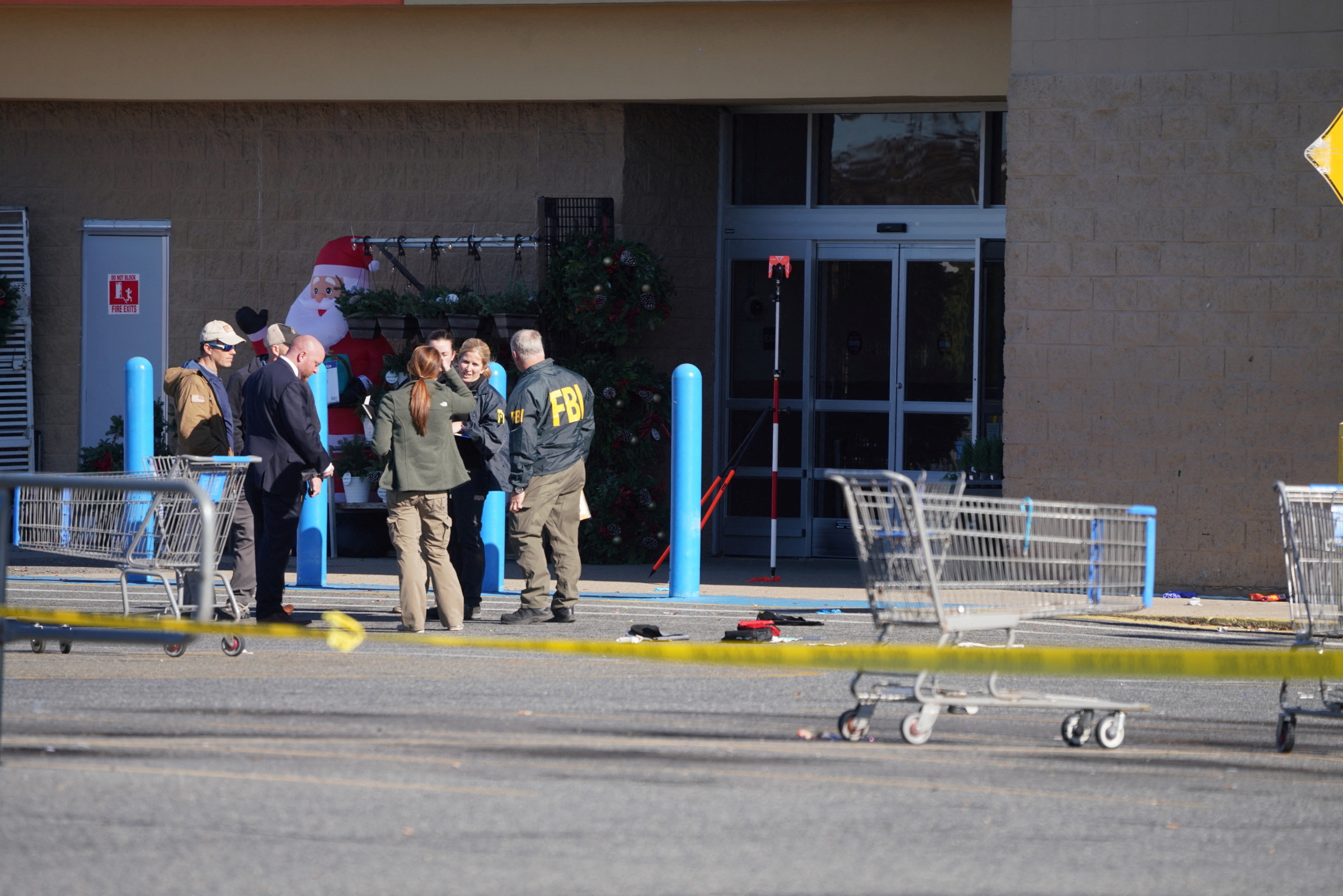 FBI agents stand in the parking lot after a mass shooting at a Walmart in Chesapeake, Virginia, U.S. November 23, 2022. REUTERS/Jay Paul 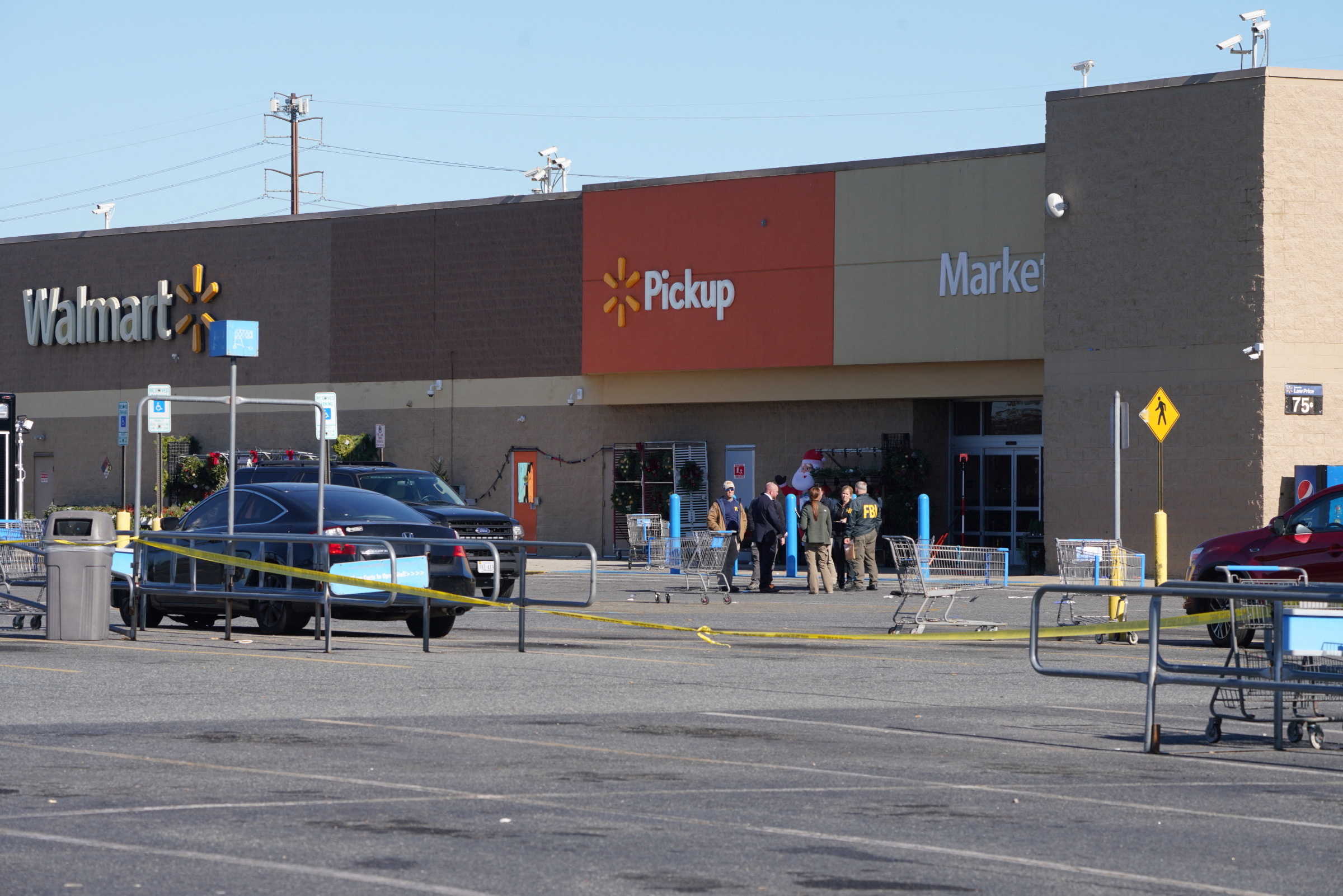 FBI agents stand in the parking lot after a mass shooting at a Walmart in Chesapeake, Virginia, U.S. November 23, 2022. REUTERS/Jay Paul? 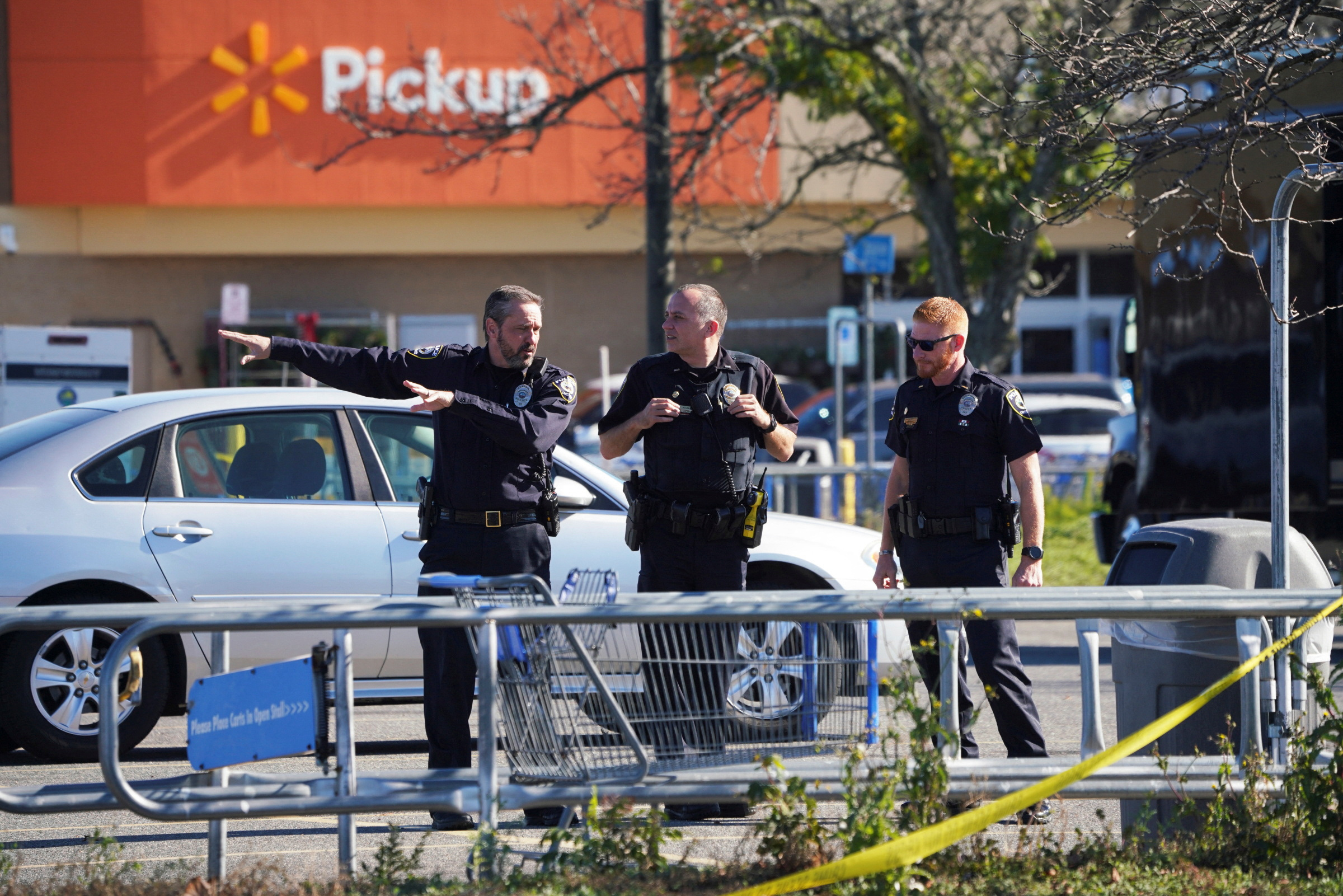 Police officers stand in the parking lot after a mass shooting at a Walmart in Chesapeake, Virginia, U.S. November 23, 2022. REUTERS/Jay Paul 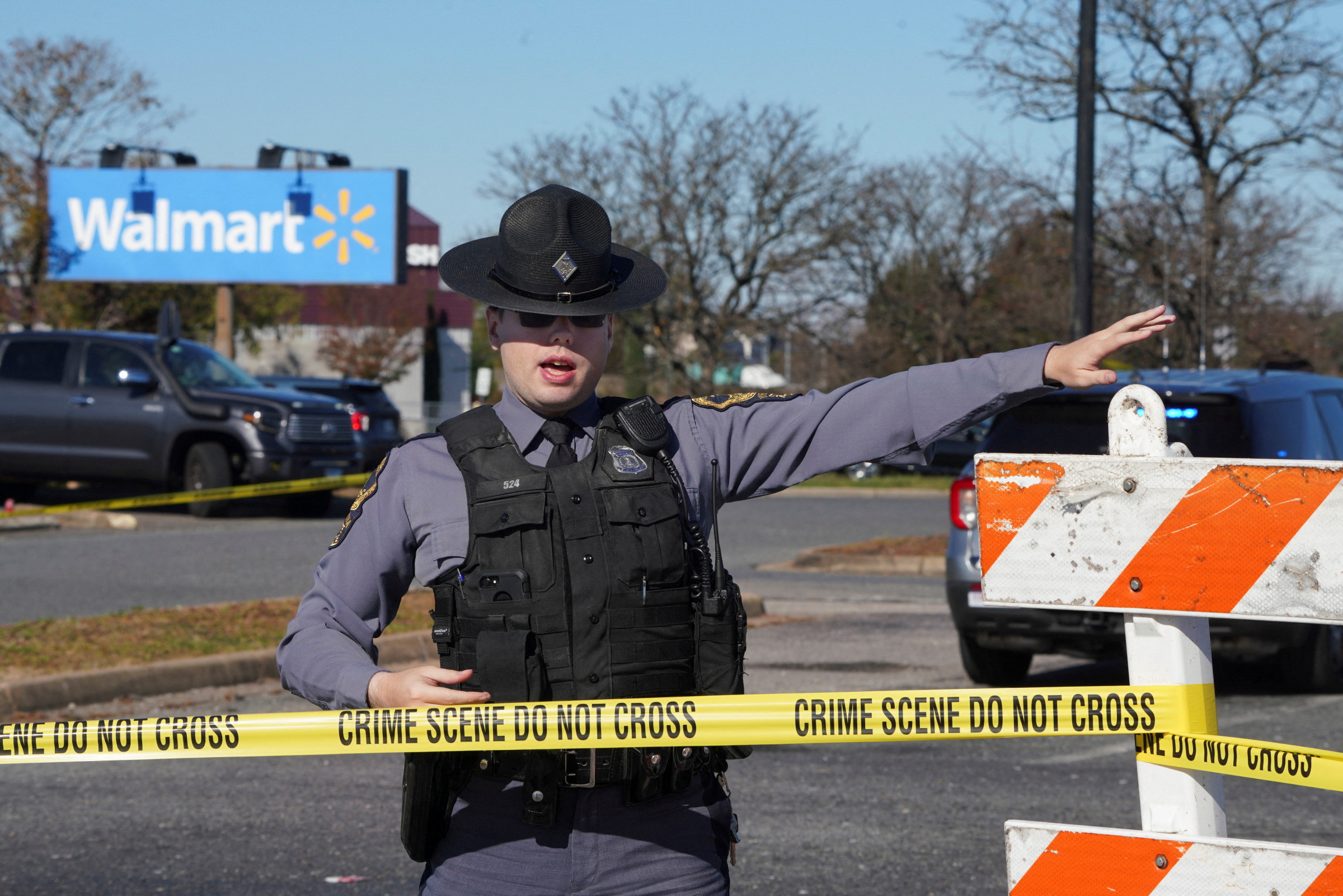 Virginia State policeman gestures at members of the media to stay at the back of the parking lot after a mass shooting at a Walmart in Chesapeake, Virginia, U.S. November 23, 2022. REUTERS/Jay Paul 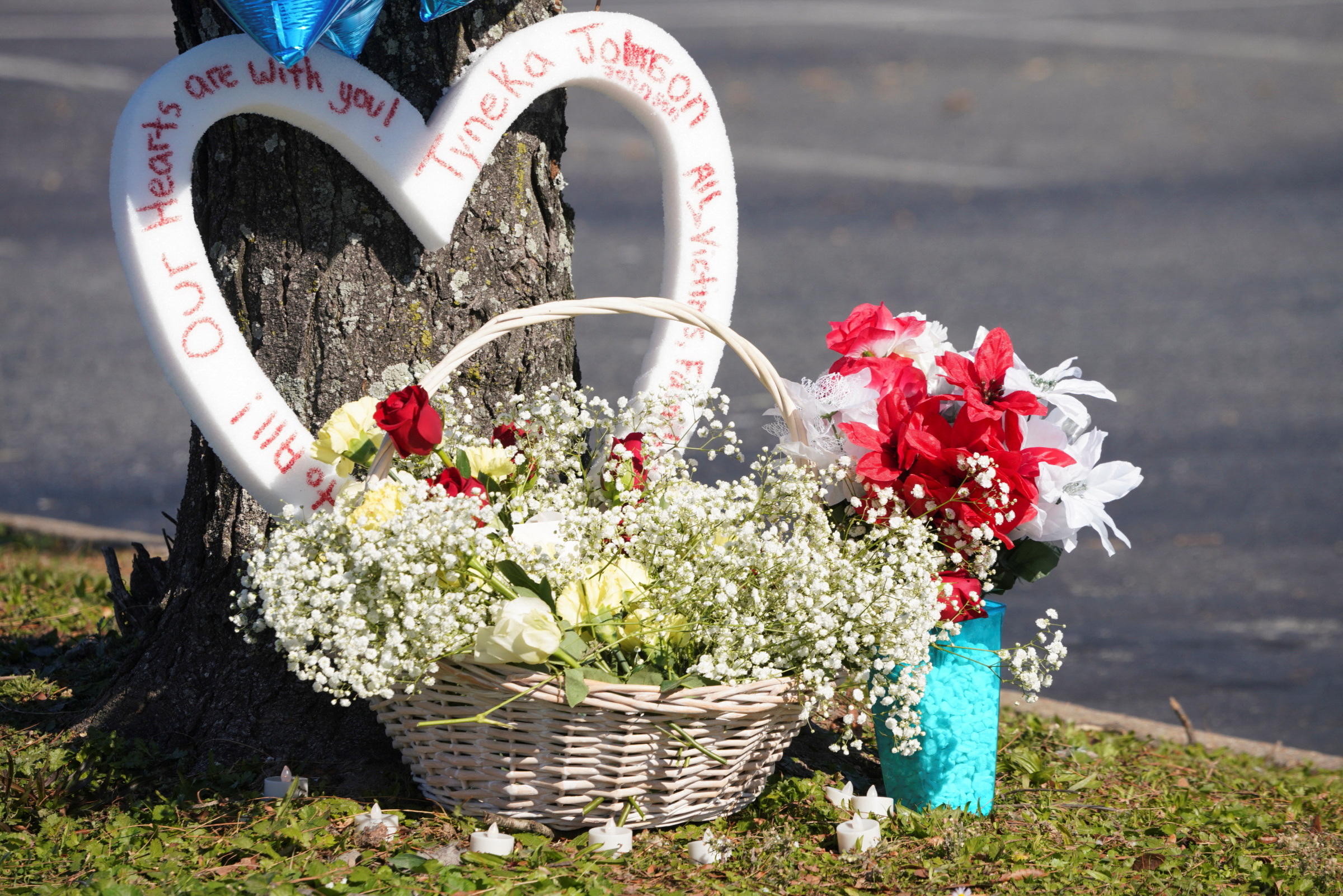 A memorial is seen in the parking lot after a mass shooting at a Walmart in Chesapeake, Virginia, U.S. November 23, 2022. REUTERS/Jay Paul 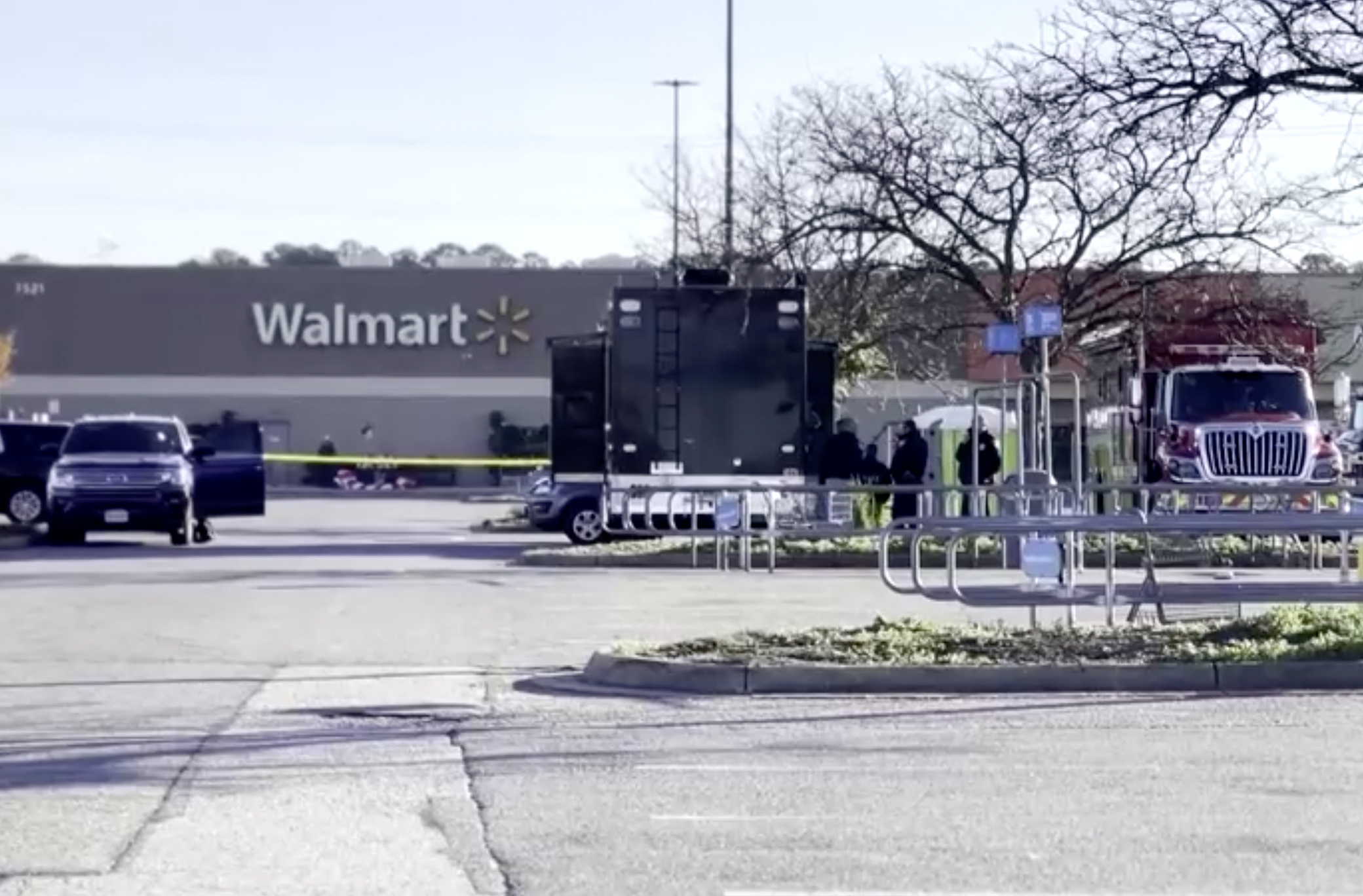