The first time the U.S. men’s national team faced England in a World Cup, in 1950, a miracle occurred. The hastily-assembled U.S. squad—which was partly made up of amateur players who held day jobs including as teachers, dishwashers, and mail carriers—knew that England had the stronger side. “We certainly didn’t entertain any ideas we were gonna beat ’em,” the former U.S. defender Harry Keough reflected decades later. “But we figured we could give them a battle for it.”

That battle came to a head at the 37th minute of the first half, when the Haitian-born U.S. forward Joe Gaetjens managed to graze the ball just enough to sink it into the English goal. England never recovered, and the match ended in a 1-0 U.S. victory. So unthinkable was the result that many news outlets, including the New York Times, presumed that the reported score was a typo. 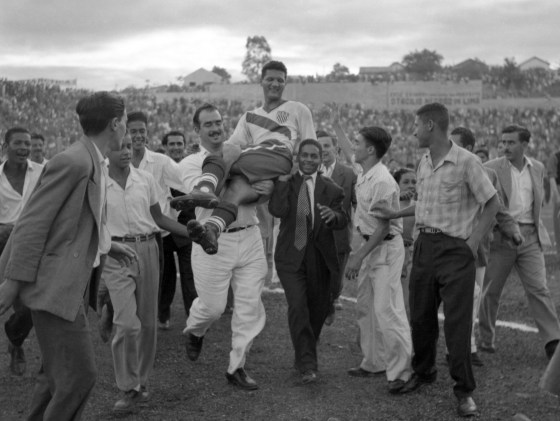 The last surviving member of the U.S. squad died in 2018, and few people alive today will remember that match. Still, its legacy looms large over the soccer rivalry between the U.S. and England, whose teams are slated to go head-to-head on Friday in Doha’s Al Bayt stadium. The last time these two nations faced each other in a men’s World Cup was more than 10 years ago, in South Africa. It ended in a 1-1 draw. Though England is the favorite to win this match in Qatar, American fans are hopeful that their team can once again pull off a miracle.

More recent history doesn’t bode as favorably for the U.S. The team qualified for this World Cup after failing to do so four years ago in what was seen as a major setback in the effort to elevate the world’s most popular game on the American sports stage—the success of the U.S. women’s national team notwithstanding. Against England, in particular, the U.S. men’s team has lost the vast majority of its matches—all, in fact, but the 1950 World Cup group stage victory in Brazil and a 2-0 win at the 1993 U.S. Cup. Team USA is markedly younger and less experienced than the Three Lions (as the English squad is known), who arrived in Qatar off the back of formidable performances during last year’s UEFA European Football Championship as well as the 2018 World Cup.

But if the past is any guide, neither side should make any assumptions about how Friday’s game will go. England coach Gareth Southgate cautioned against complacency in a post-match news conference on Monday, noting that the U.S. team will “be coming for us full throttle.” And U.S. midfielder Christian Pulisic warned as much in the days leading up to the tournament. “We don’t look at the odds and we’re not at the World Cup just to make up the numbers,” he told Britain’s Daily Mirror. “We go, we give it everything in every game we play, we make America proud. Wherever that takes us we have to wait and see.”

Here’s everything you need to know ahead of match day.

When is the game and how can you watch in the U.S.?

Kickoff is scheduled for 2:00 p.m. Eastern time, Friday, Nov. 25. Viewers in the U.S. can watch the match live on FOX or via a variety of streaming options.

How have both teams fared in the tournament so far?

Both squads will enter Al Bayt stadium undefeated on Friday. England kicked off its 2022 World Cup on Monday with an emphatic 6-2 victory over Iran. Although the U.S. secured an early lead against Wales later that day with a stunning goal from forward Timothy Weah, the match ended in a draw after a penalty scored by Welsh captain Gareth Bale. 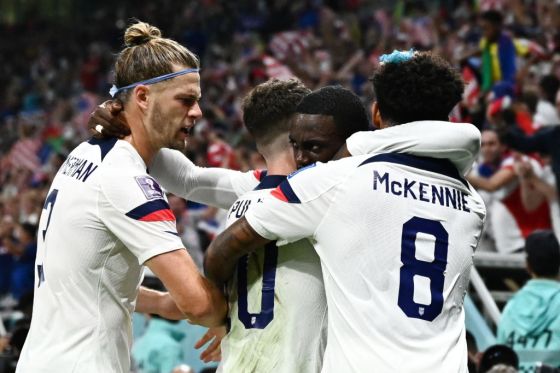 Jewel Samad—AFP/Getty ImagesForward Timothy Weah embraces teammates after scoring the U.S.’s first goal during the Qatar 2022 World Cup in the match against Wales at the Ahmad Bin Ali Stadium, Nov. 21, 2022.

In terms of points, which will ultimately determine which two teams in Group B will advance to the knockout stage, England tops the leaderboard with three points, followed by the U.S. and Wales with one point apiece, and Iran at zero. Assuming a win against Iran next week, which is poised to be the U.S.’s easiest (though by no means guaranteed) match in this stage of the tournament, victory or a draw against England on Friday would put the U.S. in a strong position to make it to the round of 16. If Team USA advances, it would face one of the top two teams from Group A—which includes the Netherlands, Ecuador, Senegal, and host nation Qatar. But a loss to England could put those hopes in the balance.

How much does history inform this matchup?

The U.S. and England have developed a healthy—and, at times, even meme-worthy—soccer rivalry over the years. Although the U.S. players are self-described “underdogs” in this World Cup, American fans know that the team has the capacity to deliver upsets against giants of the sport, having beaten Brazil in the 1998 CONCACAF Gold Cup, Portugal in the 2002 World Cup, and, of course, England in 1950.

When the U.S. defeated the Three Lions in Brazil 72 years ago, the news barely registered at home, according to Geoffrey Douglas, the author of the 1996 book The Game of Their Lives, which chronicled the story of the match and those who participated in it. When the players returned home after being knocked out of the competition, they discovered that “nobody knew anything about it,” Douglas tells TIME, noting that as a sport, soccer “just wasn’t on the radar” in the way that more popular games such as baseball and football were. It wasn’t until decades later—as soccer’s significance grew and as the story of the 1950 World Cup began to be memorialized in popular culture, including in a 2005 film based on Douglas’s book—that Americans started to become more aware of their country’s historic upset.

Read More: Your Complete Guide to the U.S. Men’s National Team at the 2022 World Cup in Qatar

As much as the U.S. squad will feel that it has something to prove, England will equally be eying this match as a crucial one to win in its quest for World Cup glory. After all, the Three Lions have suffered some heartbreaking defeats in their recent international competitions, including their loss to Italy in a penalty shootout during the European Championship final last year and their semifinal defeat at the hands of Croatia during the 2018 World Cup. The pressure to finally ensure that football’s coming home, as goes England fans’ popular rallying cry, a nod to the country’s invention of the sport Americans call soccer, will weigh heavily on Southgate’s team.

What are both teams’ strengths and weaknesses?

England’s squad under manager Southgate has been frequently criticized for being too defensive and overly cautious, a notion Monday’s 6-2 result against Iran may help dispel. The U.S. team is seen as having the reverse problem, lacking a solid defense on its backline.

But the England team is widely regarded as the favorite to win this game, and with good reason. England has seen a resurgence under Southgate, boosted in part by a young yet internationally-tested squad, including a number of rising stars, such as the 21-year-old forward Bukayo Saka. 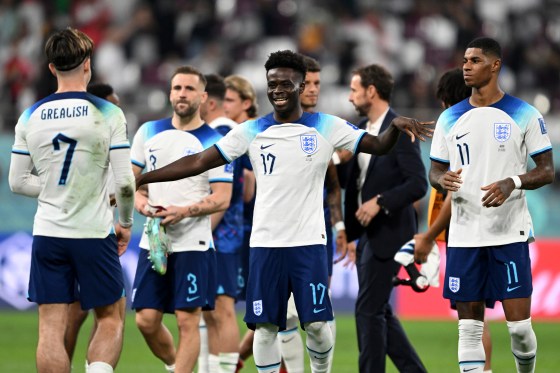 Younger players notwithstanding, England is fielding one of the most internationally-seasoned squads in this tournament—its captain Harry Kane was the top goalscorer in the 2018 World Cup. The U.S., on the other hand, claims one of the youngest teams, second only to Ghana, with an average age of 25. While the American players’ youth could be seen as an asset when it comes to the energy and intensity they can bring to matches, it can also be seen as a disadvantage: Team USA’s absence from the 2018 competition means that the squad has almost no World Cup experience, save for 2014 veteran DeAndre Yedlin.

Nevertheless, players in the current U.S. squad have been sourced from some of the world’s top professional teams, including those competing in the toughest leagues in Europe. “We’ve never had a team that has had so many players who have been playing at such a high level on their club teams,” says Djorn Buchholz, the executive director of the National Soccer Hall of Fame in Texas, “and not just sitting on the bench, but starting.”

How important is this World Cup for the U.S.?

While Team USA is preoccupied with the World Cup at hand, it will undoubtedly also be thinking ahead to 2026, when the U.S. is slated to co-host the competition with neighbors Mexico and Canada.

“As long as they can stay healthy and keep playing at high levels, you’re going to see them in 2026 having had a World Cup under their belts,” says Buchholz. “And I think that’s going to be incredibly advantageous to us in 2026.”

An older, more experienced U.S. team bolstered by home turf advantage could emerge as a serious contender in four years’ time—one with the potential to take on not just England, but any national team. That, at least, is what fans such as Buchholz are hoping for. After all, miracles can happen.