Listen to this article
2022-11-22T09:37:33Z
Ukrainian President Volodymyr Zelenskiy said on Monday (November 21) that Russia has to stop shelling Zaporizhzhia nuclear power plant after it was rocked by shelling on Sunday (November 20).

President Volodymyr Zelenskiy appealed to Ukrainians to conserve energy amid relentless Russian strikes that have already halved the country’s power capacity, as the United Nations’ health body warned of a humanitarian disaster in Ukraine this winter.

Authorities said millions of Ukrainians, including in the capital Kyiv, could face power cuts at least until the end of March due to the strikes. Citizens in the recently liberated southern city of Kherson may apply to be relocated to areas where heating and security problems are less acute, they said.

Temperatures have been unseasonably mild this autumn, but are starting to dip below zero and are expected to drop to -20 Celsius (-4 Fahrenheit) or even lower in some areas during the winter months.

Russia has been targeting Ukrainian power facilities with rocket strikes after a series of battlefield setbacks that have included withdrawing its forces from Kherson city to the east bank of the mighty Dnipro River that bisects the country.

“The systematic damage to our energy system from strikes by the Russian terrorists is so considerable that all our people and businesses should be mindful and redistribute their consumption throughout the day,” Zelenskiy said in his nightly video address.

“Try to limit your personal consumption of electricity.”

“Ukraine’s health system is facing its darkest days in the war so far. Having endured more than 700 attacks, it is now also a victim of the energy crisis,” Hans Kluge, WHO’s regional director for Europe, said in a statement after visiting Ukraine.

“Access to healthcare cannot be held hostage,” he said, adding that up to 3 million more people could leave their homes this winter in search of warmth and safety.

Workers are racing to repair damaged power infrastructure, Sergey Kovalenko, the head of YASNO, which provides energy for Kyiv, said on Monday.

“Stock up on warm clothes, blankets, think about options that will help you get through a long outage,” Kovalenko said. “It’s better to do it now than to be miserable.”

In a Telegram message for Kherson residents – especially the elderly, women with children and those who are ill or disabled – Deputy Prime Minister Iryna Vereshchuk posted a number of ways residents can express interest in leaving.

“You can be evacuated for the winter period to safer regions of the country,” she wrote, citing both security and infrastructure problems.

Ukrainian presidential adviser Mykhailo Podolyak said Russia was bombarding Kherson from across the Dnipro River, now that its troops had fled.

“There is no military logic: they just want to take revenge on the locals,” he tweeted late on Monday.

Moscow denies intentionally targeting civilians in what it calls a “special military operation” to rid Ukraine of nationalists and protect Russian-speaking communities.

Kyiv and the West describe Russia’s actions as an unprovoked war of aggression.

The sprawling Kyiv Pechersk Lavra complex that was raided is a Ukrainian cultural treasure and the headquarters of the Russian-backed wing of the Ukrainian Orthodox Church that falls under the Moscow Patriarchate.

Battles continued to rage in the east, where Russia has sent some of the forces it moved from around Kherson in the south, pressing an offensive of its own along a stretch of frontline west of the city of Donetsk held by its proxies since 2014.

The General Staff of the Ukrainian Armed Forces said on Tuesday its forces had repelled numerous Russian attacks in several areas in the Donetsk region.

“The enemy does not stop shelling the positions of our troops and settlements near the contact line,” it said. “Attacks continue to damage critical infrastructure and civilian homes.”

Four people were killed and four others wounded in Ukraine-controlled areas of Donetsk region over the past 24 hours, regional governor Pavlo Kyryleno said on Telegram messaging app.

Russia and Ukraine on Monday traded blame for at least a dozen explosions at Ukraine’s Zaporizhzhia nuclear power station, which has been under Russian control since soon after it invaded the country on Feb. 24 but is across the Dnipro River from areas controlled by Kyiv.

Experts of the International Atomic Energy Agency (IAEA) toured the site on Monday. The agency said they found widespread damage but nothing that compromised the plant’s essential systems. 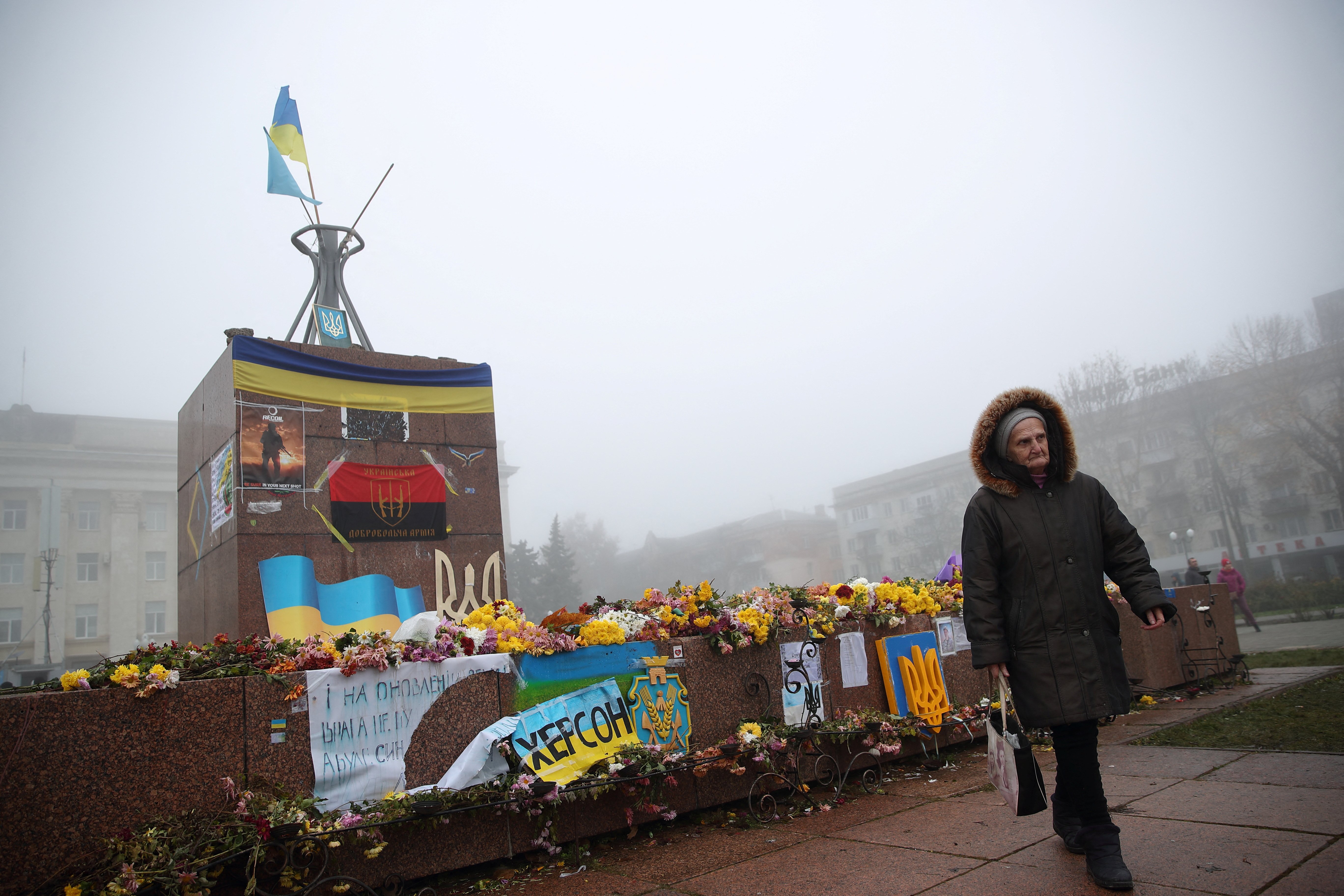 A woman walks past a statue in the central sqaure after Russia’s military retreat from Kherson, Ukraine November 21, 2022. REUTERS/Murad Sezer 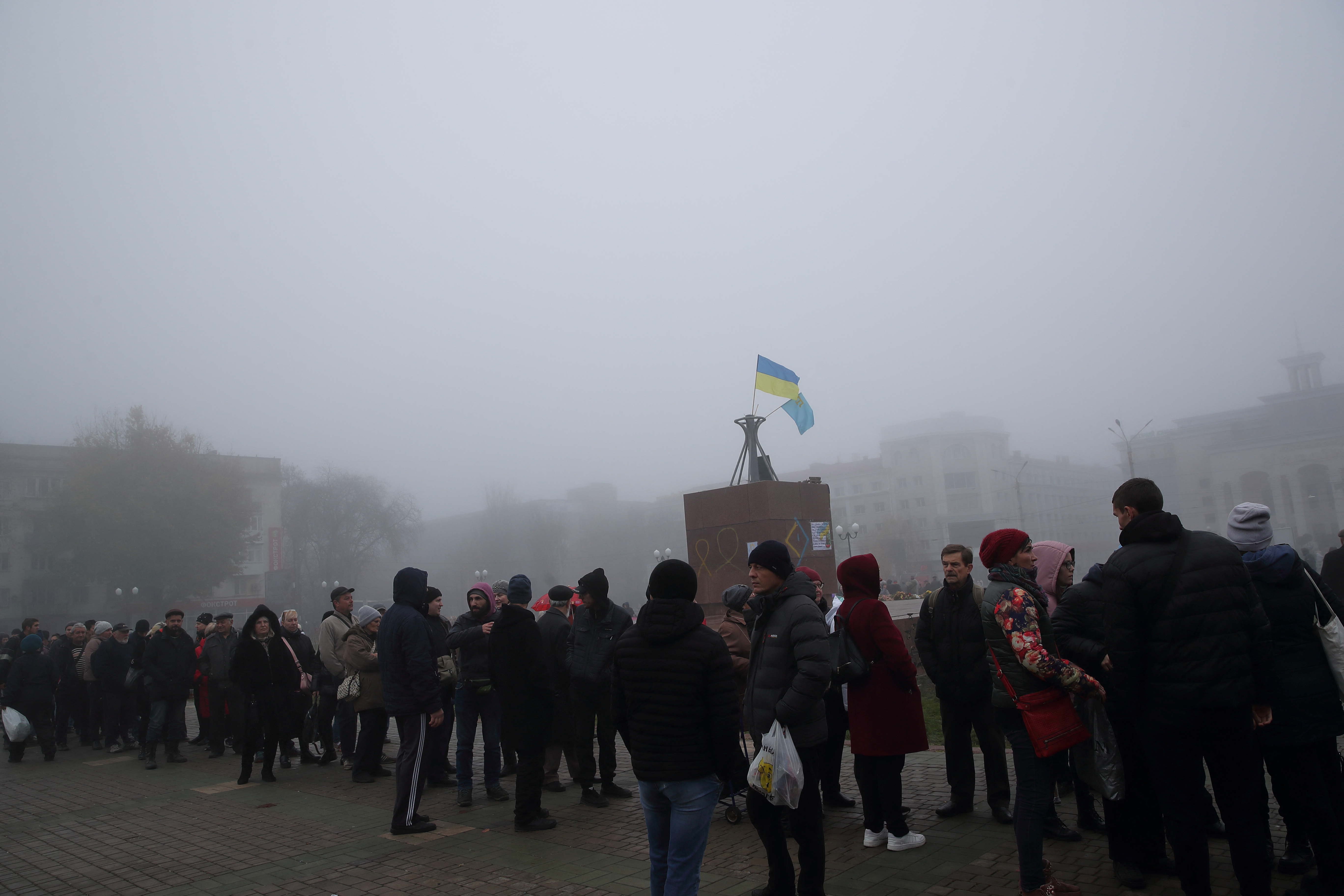 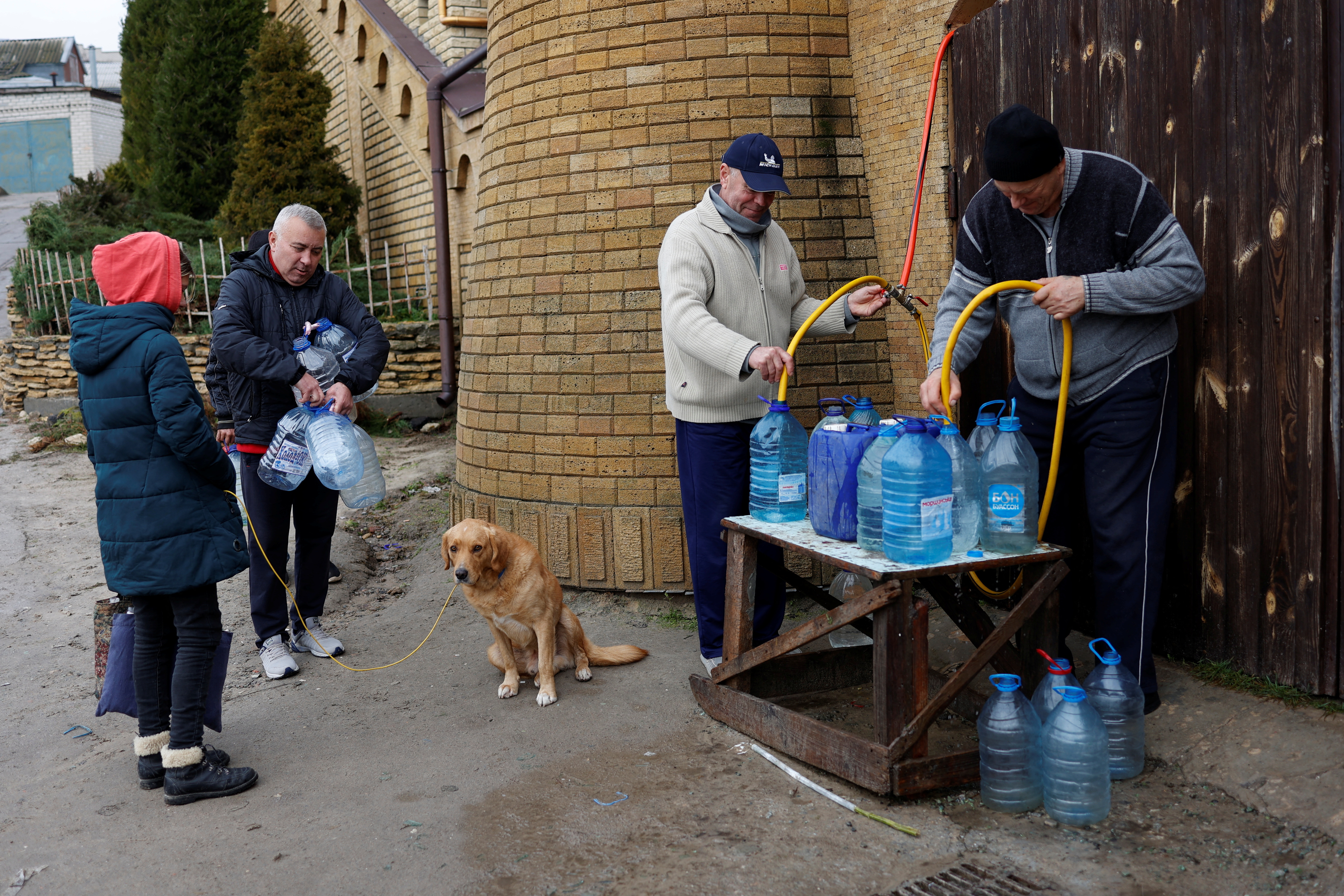 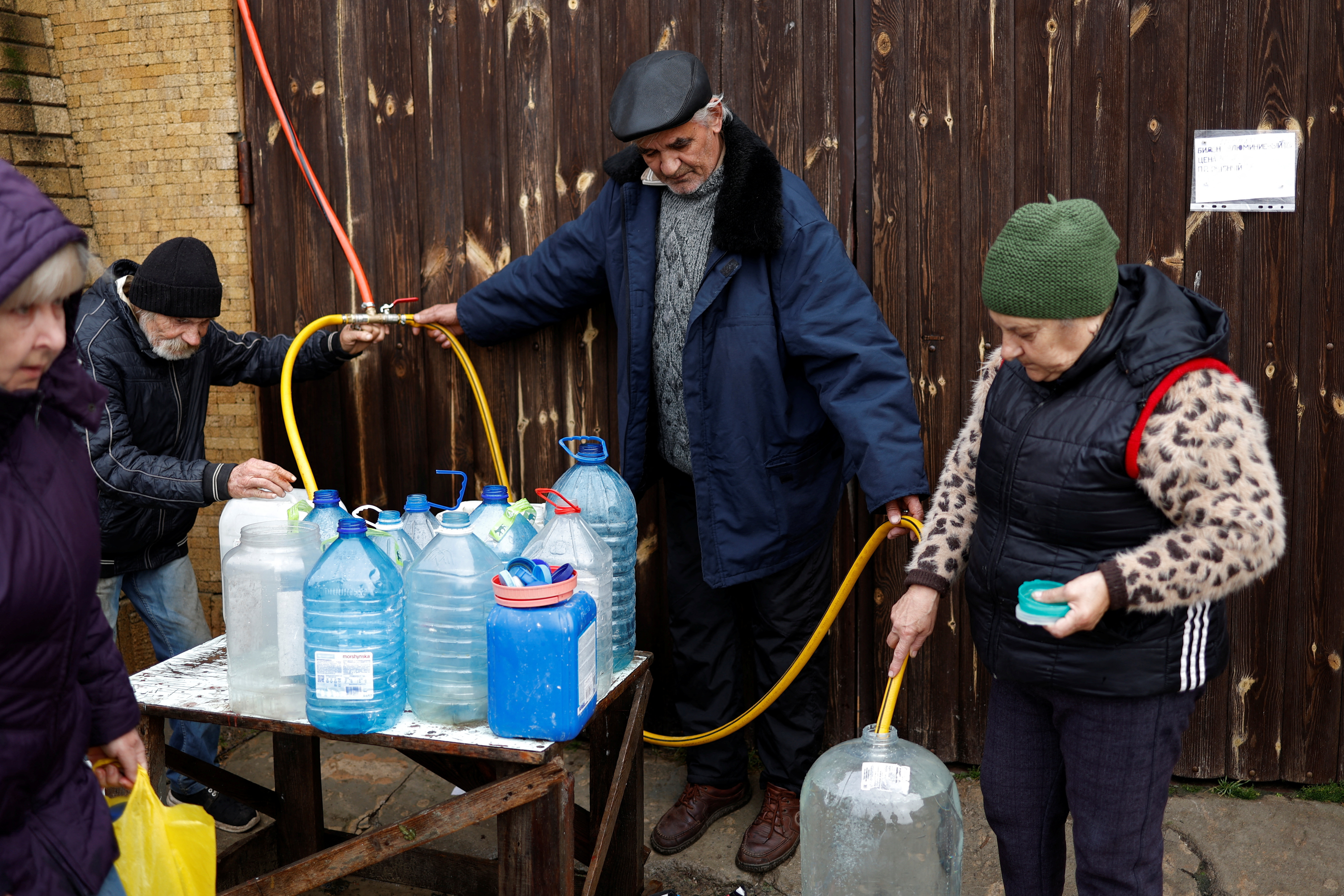 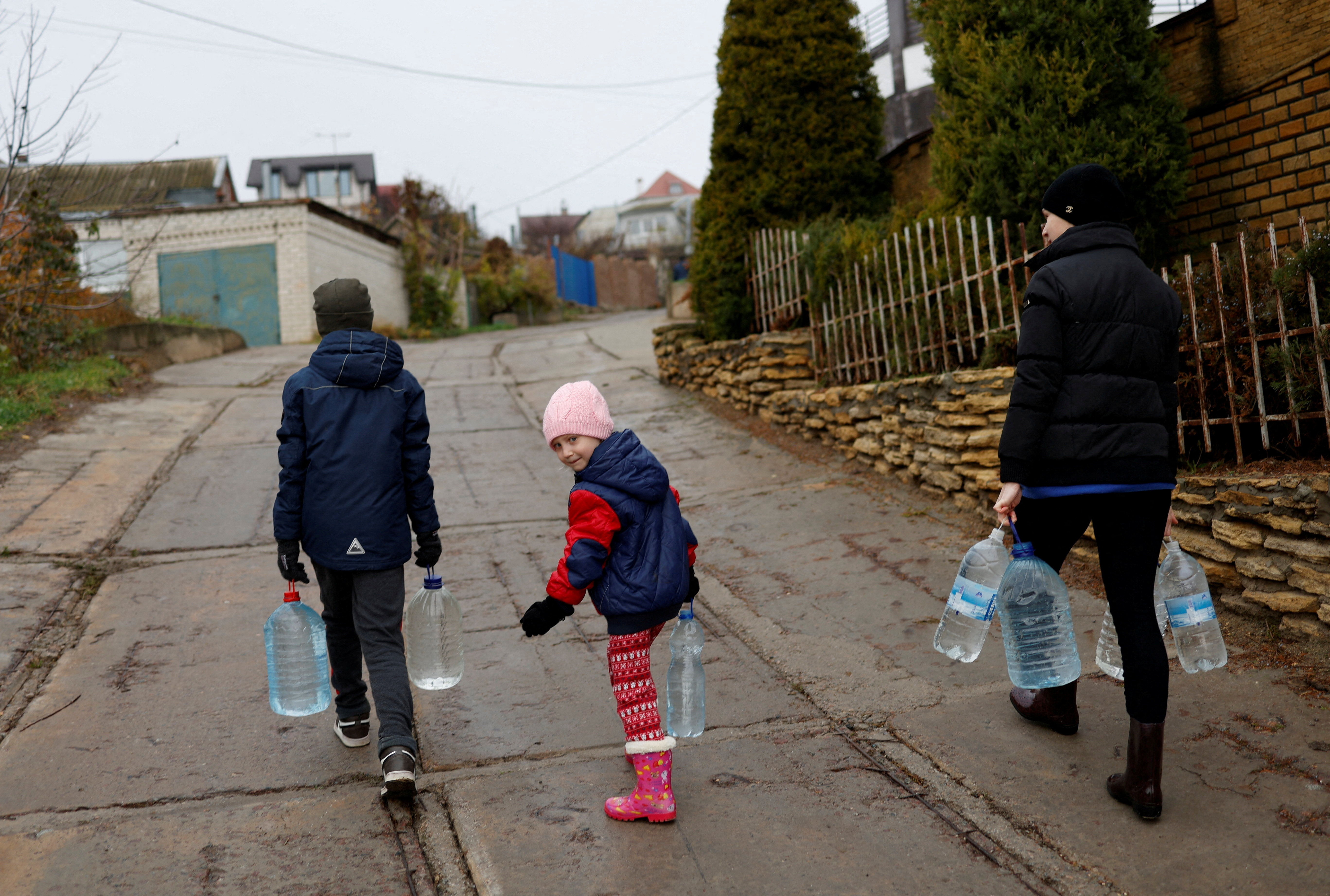