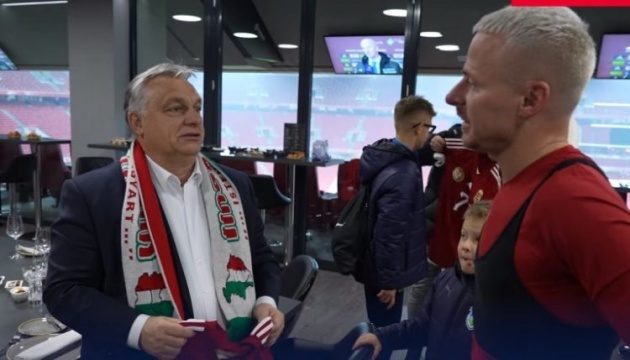 Hungarian Prime Minister Viktor Orban on Sunday, Nov. 20,appeared at a football match of the Hungarian national team with a scarf depicting a map of “Greater Hungary” with parts of neighboring states in its composition.

The scarf depicts a map of Hungary with parts of a number of EU countries, including Romania, and Ukraine. A video from the event was published on Orban’s Facebook page.

“The irresponsible behavior of Viktor Orban, who showed himself wearing a scarf with the map of Greater Hungary. It’s a revisionist gesture that puts Orban alongside Putin, who also dreams of border changes. […] Orban must account for such actions incompatible with the status of a member of the family of liberal democracies,” said Romanian MEP Alin Mituta, commenting on the incident.

German MEP Daniel Freund posted a tweet saying: “The Prime Minister of Hungary – wearing a scarf with the map of Greater Hungary. How reassuring for Hungary’s neighbors.”

The Ukrainian Foreign Ministry, in turn, will invite the Hungarian ambassador in connection with the appearance of Orban at a football match with a scarf depicting a map of “Greater Hungary” with parts of Ukrainian territory.

“The promotion of revisionist ideas in Hungary does not contribute to the development of Ukrainian-Hungarian relations. The Hungarian ambassador will be invited to the Ministry of Foreign Affairs of Ukraine and he will be informed of the unacceptability of Viktor Orban’s act. We are waiting for an official apology from the Hungarian side and a refutation of encroachments on the territorial integrity of Ukraine,” he wrote.

This is not the first time Orban is using a map of “Greater Hungary.” Two years ago, he wished high school students good luck in their history exam by posting an image of a globe with an 1862 political map of the world in the foreground. The map depicted the lands that the Kingdom of Hungary lost according to the Treaty of Trianon on June 4, 1920.

“Greater Hungary” is a broad general term consisting of irredentist and revisionist political ideas. The idea is connected with Hungarian revisionism. Its goal is to restore the borders that existed before the First World War in the Kingdom of Hungary, or at least to regain control over Hungarian settlements in countries neighboring Hungary.