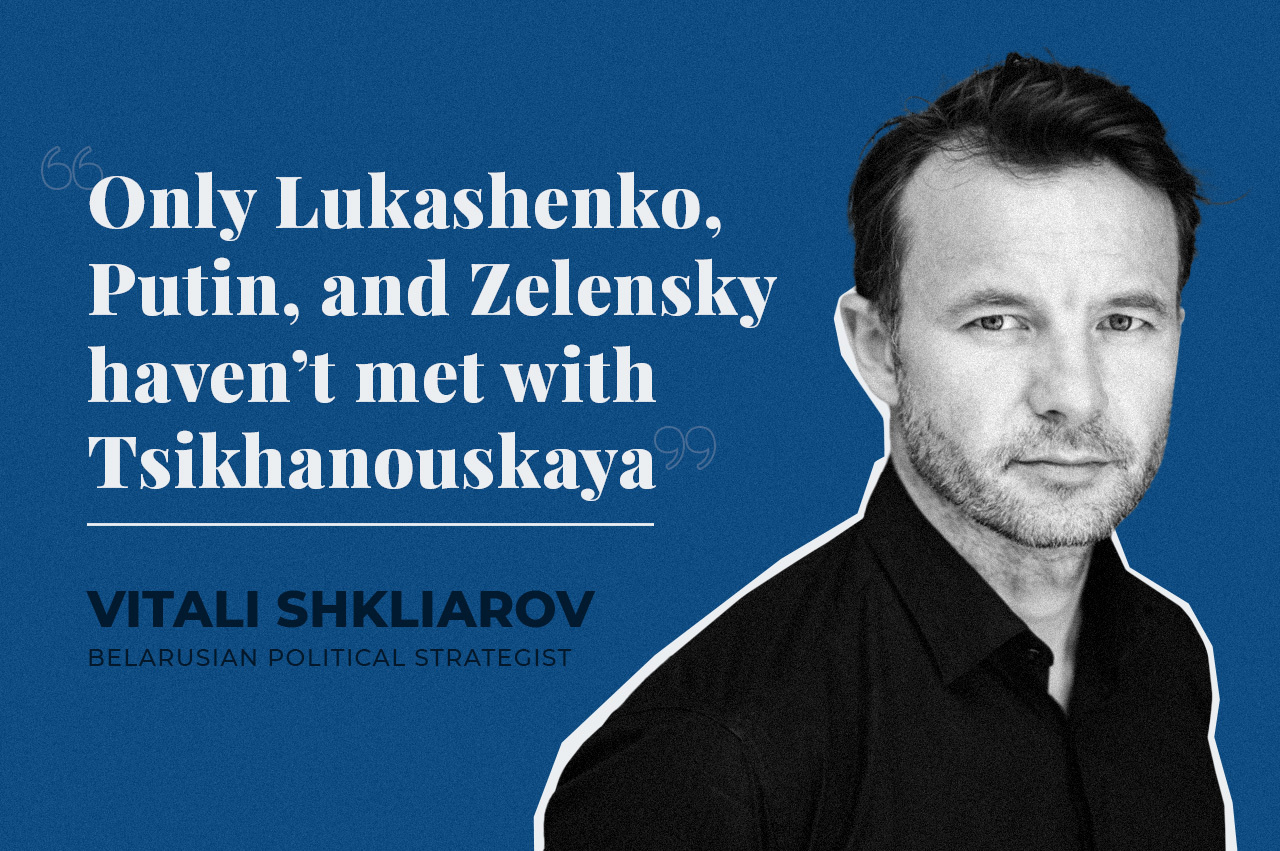 According to Belarusian opposition activist Vitali Shkliarov, “Of European leaders, only Lukashenko, Putin and Zelensky haven’t met with Tsikhanouskaya, yet.”

In this second part of an interview with Vitali Shkliarov, a Belarusian opposition activist and political engineer, Kyiv Post asked why Sviatlana Tsikhanouskaya, the winner in the 2020 presidential election in Belarus, is still not in contact with the Ukrainian leadership and why cooperation with her is also important for the Ukrainian president’s office.

In the first part of the interview Mr. Shkliarov told Kyiv Post about prospects for Belarus under Lukashenko and the probability of Belarusian troops attacking Ukraine.

In your article for Ukrainska Pravda you criticized the Ukrainian leadership for its uncertain position in regard to Sviatlana Tsikhanouskaya. Would you please explain why it is necessary to establish contacts with her and how Kyiv could cooperate with her?

Sviatlana Tsikhanouskaya and her cabinet are Ukraine’s allies. She represents millions of Belarusians under occupation and thousands of political prisoners who reach out for Volodymyr Zelensky. I think it’s time to formalize this alliance and provide support for a free Belarus, so that our forces confronted by the Russian threat grow tenfold. This is a matter of both Ukraine’s national security and the future of nine million Belarusians.

The official recognition of Free Belarus and its president Sviatlana Tsikhanouskaya by Ukraine would launch the mechanism of such recognition throughout Europe and the rest of the world. It would be a powerful move toward mercy and reconciliation, mutual help and cultural reintegration of Belarusians inside and beyond their country. We need your Ukrainian support and experience as never before.

By far, of all European leaders, only Lukashenko, Putin and Zelensky haven’t met with Tsikhanouskaya, yet, and haven’t recognized her election. I know that to you Ukrainians and us Belarusians, this kind of relationship is unacceptable and insulting. So is the fact that the Ukrainian foreign ministry hasn’t severed diplomatic relations with Lukashenko.

You know, the slogan on the banners of the Ukrainian Insurgent Army read “Freedom for Nations – Freedom for One.” It’s symbolic. The insurgents who fought for Ukraine’s independence against both the Nazi and Soviet invaders believed that the freedom of an individual is impossible without the freedom of nations – all nations! So, I believe Mr. Zelensky and his administration could do a lot for a free Belarus to become a partner of the free Ukraine and for Lukashenko’s Belarus to disappear at last.

How would you explain such a questionable attitude to Tsikhanouskaya on the part of Zelensky and other Ukrainian politicians?

It’s a difficult question. I hope the Zelensky administration still doesn’t prioritize this issue exclusively for preposterous reasons. I could name ten runaround explanations that I’ve heard at all levels of your leadership.

Some explanations appear to be reasonable and others look really weird. Take this one, for instance: “Relations with Belarus could worsen.” But they couldn’t be worse after February 24! Some explain that there could be reprisals against Belarusian opposition activists or terrorist acts in Ukraine. But what could be worse than missile strikes on peaceful civilians?

Possibly, someone doesn’t want to close the channel of communication with Putin through Lukashenko, but has it ever worked? As I heard in the first weeks of the war, some spare parts or fuel for the Ukrainian army could be imported from Belarus, but that’s impossible!

Many argue that Tsikhanouskaya hasn’t recognized Crimea as part of Ukraine or that she hasn’t been explicit enough on Russia’s war against Ukraine. In Ukrainska Pravda I gave two dozen examples of her clear position statements.

I see no reason not to cooperate with Tsikhanouskaya. Such communication with her cabinet is very important for the Belarusians. Belarus is the last post-Soviet nation remaining in Russia’s orbit and it’s necessary to break away from it. That would be the last nail driven into the coffin of Soviet imperialism.

While Russia is trying to reinforce its army at the expense of criminal mobilization by recruiting a million thugs, Ukraine should mobilize nine million Belarusians in its support. Together with Ukraine, Tsikhanouskaya could organize a legitimate referendum in occupied Belarus and create a fair, viable state – a new Belarus that would become Ukraine’s most reliable ally. And the main weapon we need now is your word of support for a free Belarus.

For example, the first embassy of Free Belarus could open on 3 Kotsyubyns’koho Street in Kyiv, in the building vacated by the Belarusian collaborators who fled Ukraine. It could bury the Lukashenko regime diplomatically and issue new Belarusian passports. Then every Belarusian holder of this passport could vote for a democratic future of Belarus and Ukraine and against the Putin and Lukashenko regimes.

That would be our national referendum with undeniable results and another step in enlisting support in the West and East.

Ukraine is actively cooperating with the Kastus Kalinouski Regiment. As far as I understand, they are not in touch with Tsikhanouskaya. Are they competitors?

They are not competitors. They are both fighting for the right cause. The Seim [elected leadership] of the Kastus Kalinouski Regiment and everyone in the regiment are certainly worthy people who are respected by both Belarusians and Ukrainians. They are real heroes, the pride of my country. If the Ukrainian leadership opted for Tsikhanouskaya as the legitimate president, it wouldn’t undermine the regiment’s authority, wouldn’t prevent it from fighting for Ukraine’s freedom and wouldn’t cast any doubt on the Seim’s political future. Sviatlana Tsikhanouskaya is not a competitor and not a dictator. Moreover, she built her election campaign on a pledge to hold, once elected, a new presidential election.

But first it’s necessary to defeat Russia and get rid of Lukashenko. Ukraine’s bet on Tsikhanouskaya could help achieve these goals because it would consolidate the Belarusian opposition and give an impetus to a more active struggle inside the occupied country.

Why don’t the regiment and Tsikhanouskaya join forces? Why are they acting separately?

They are not acting separately. Their efforts are the same. They have the same goals and the same enemy. The Kalinouski regiment is fighting at the front. Tsikhanouskaya is fighting diplomatically.

Tsikhanouskaya has said many times that the Belarusians are not Lukashenko and we have heard many times from Russia that the Russians are not Putin. But the Russians don’t do anything to stop the war and don’t even hide their hatred of Ukrainians. It’s practically the same with the Belarusians: They don’t support this war but are passive. So Tsikhanouskaya’s utterances don’t quite sound agreeable to the Ukrainians. After all, until 2020 the Belarusians had voted for Lukashenko, so it would be wrong to regard them separately from his regime.

The efforts and sacrifices during the protests in Minsk in 2020 helped to create a new reality and a point of consolidation of a new Belarusian nation. We are different now. We have our own, genuine president instead of that balloon inflated with Russian gas. We have the choice of a different future, a free European future. And most importantly, we have us – Belarusians who are ready to fight together. Today we are all new citizens of a new and fair Belarus!

Secondly, the Belarusian people didn’t elect Lukashenko in 2020. The winner was Tsikhanouskaya. In 2015, they didn’t elect him either. In fact, none of the presidential elections since the first one in 1994 were legitimate. All of them were rigged. Opposition forces were left out of the race. That’s why I say that the Belarusians have never elected Lukashenko and are not Lukashenko.

We Belarusians have been silent for too long and haven’t called a spade a spade. But now it’s time to end this. Lukashenko and Putin are digging a grave for the old, crippled Soviet world. Their actions are convincing those who doubt and motivating those who hesitate. They are doing everything for this to never happen again. They are making us stronger.

Who should be president after Belarus is freed: Tsikhanouskaya who won the election or her husband who was Lukashenko’s main rival?

Excuse me, but this question is incorrect. Sviatlana Tsikhanouskaya, as the legitimately elected president, holds the mandate that expires in 2025. After that, a new fair election must be held. Until then, she will be the legitimate president of New Belarus.

Belarus and Ukraine will be free, and it’s inevitable. Long live Belarus! Glory for Ukraine! Forever!