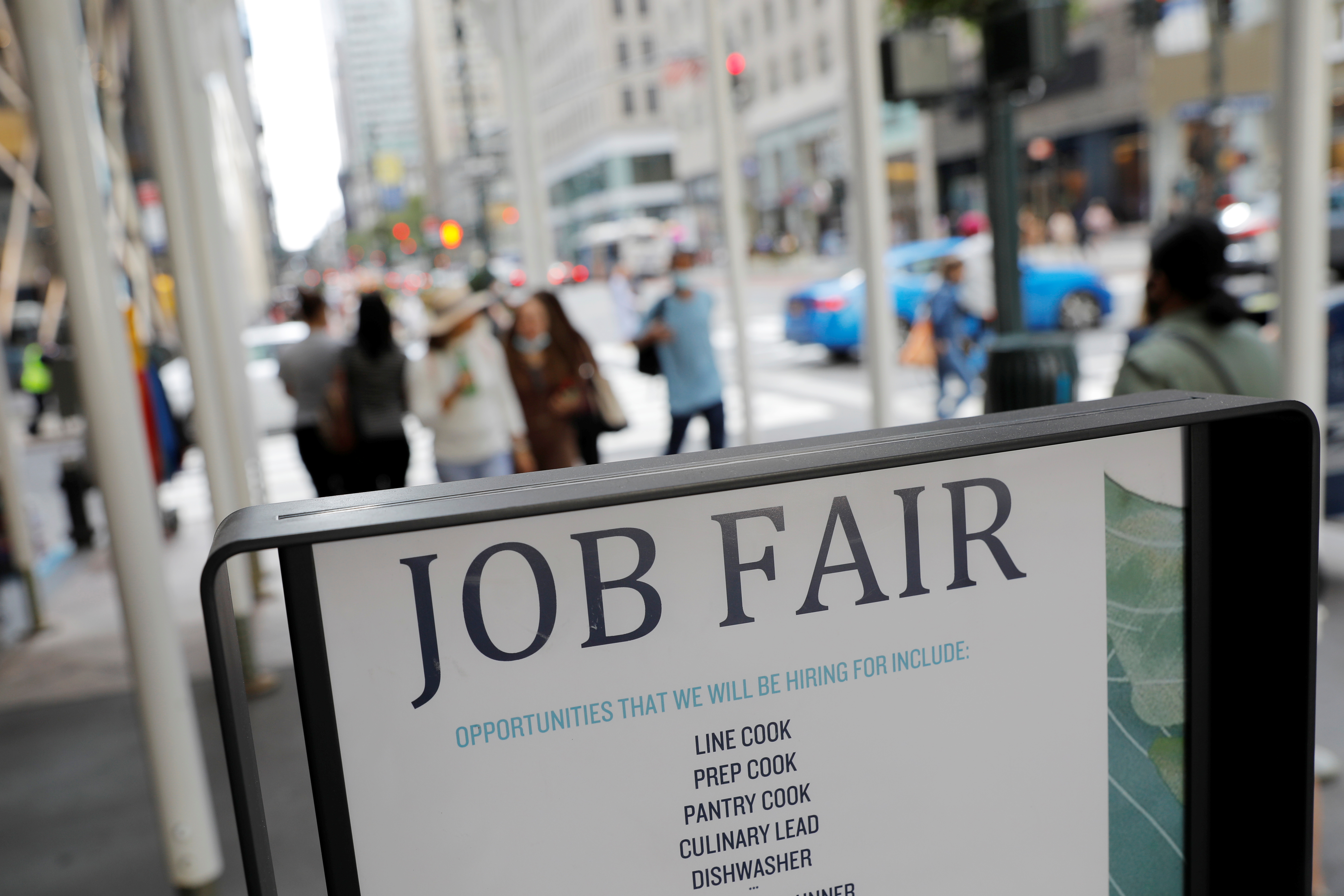 Signage for a job fair is seen on 5th Avenue after the release of the jobs report in Manhattan, New York City, U.S., September 3, 2021. REUTERS/Andrew Kelly

The number of Americans filing new claims for unemployment benefits fell last week, showing widespread layoffs remain low despite a surge in technology-sector job cuts that has raised fears of an imminent recession.

The weekly jobless claims report from the Labor Department on Thursday, the most timely data on the economy’s health, suggested the labor market remained tight. That, together with solid consumer spending, keeps the Federal Reserve on track to continue raising interest rates, though at a slower pace amid signs inflation was starting to subside.

“This is a testimony to how tight the labor market remains,” said Robert Frick, corporate economist at Navy Federal Credit Union in Vienna, Virginia.

Initial claims for state unemployment benefits dropped 4,000 to a seasonally adjusted 222,000 for the week ended Nov. 12. Economists polled by Reuters had forecast 225,000 claims for the latest week.

There has been an increase in layoffs in the technology sector, with Twitter, Amazon (AMZN.O) and Meta (META.O), the parent of Facebook, announcing thousands of job cuts this month. Companies in interest-rate sensitive sectors like housing and finance are also letting workers go.

The layoffs have so far not been evident in official data. Unadjusted claims dropped 6,101 to 199,603 last week. Claims in California, the epicenter of the technology job cuts, rose by only 302 last week. Big decreases in claims were reported in Florida, Georgia, Kentucky, Indiana and Texas, offsetting notable increases in Minnesota and North Carolina.

Economists say businesses outside the technology and housing sectors are hoarding workers after difficulties finding labor in the aftermath of the COVID-19 pandemic. With 1.9 job openings for every unemployed person in September, some of the workers being laid off are probably finding new employment quickly.

Economists at Goldman Sachs dismissed worries that the technology layoffs were flagging an imminent recession in a note this week. They argued that technology job openings remained well above their pre-pandemic level, also noting layoffs in the sector have not historically been a leading indicator for deterioration in the overall labor market.

The Fed has raised its policy rate by 375 basis points this year from near zero to a 3.75%-4.00% range as it battles to bring inflation back to the U.S. central bank’s 2% target in what has become the fastest rate-hiking cycle since the 1980s.

Financial markets are betting that the Fed will shift down to a half-percentage-point rate hike at its Dec. 13-14 policy meeting, according to the CME Group’s FedWatch Tool.

So far, the economy is weathering the tighter monetary policy storm, with data on Wednesday showing strong retail sales growth last month. This has led economists to expect that the policy rate could see increases for a long period, eventually reaching a higher level that will be maintained for a while.

Stocks on Wall Street were trading lower. The dollar rose against a basket of currencies. U.S. Treasury prices fell.

The claims data covered the week during which the government surveyed business establishments for the nonfarm payrolls component of November’s employment report.

Claims rose marginally between the October and November survey periods, suggesting another month of solid job growth. The economy created 261,000 jobs in October.

Next week’s data on the number of people receiving benefits after an initial week of aid will shed more light on November’s employment report. The so-called continuing claims, a proxy for hiring, increased 13,000 to 1.507 million in the week ending Nov. 5, the highest level since March.

But the housing market is crumbling under the weight of higher borrowing costs, while manufacturing is cooling. Factory activity in the mid-Atlantic region declined further in November, a report from the Philadelphia Fed showed.

A third report from the Commerce Department showed housing starts decreased 4.2% to a seasonally adjusted annual rate of 1.425 million units last month. Starts dropped 8.8% on a year-on-year basis in October.

Starts for housing projects with five units or more slipped 0.5% to a rate of 556,000 units. Multi-family housing construction has fared better as soaring mortgage rates force many potential homebuyers to remain renters. A key gauge of rents surged by the most on record on a year-on-year basis in October, according to the latest consumer price data.

The 30-year fixed mortgage rate is averaging above 7%, the highest level since 2002, according to data from mortgage finance agency Freddie Mac. A survey on Wednesday showed confidence among single-family homebuilders fell for an 11th straight month in November.

Permits for future home construction decreased 2.4% to a rate of 1.526 million units in October. Single-family building permits dropped 3.6% to a rate of 839,000 units, also the lowest level since May 2020. Permits for housing projects with five units or more slipped 1.9% to a rate of 633,000 units.

The number of single-family homes under construction fell, while the stock of completed houses was the lowest since January, suggesting supply will remain tight even as demand slows, which could prevent an outright decline in prices.