There was a moment, eight minutes into injury time of Team USA’s 1-1 tie against Wales on Monday, that Tyler Adams demonstrated exactly why he is the youngest captain at the 2022 World Cup.

Wales striker Gareth Bale had already canceled out Timothy Weah’s first-half strike with a late penalty and was bearing down ominously in search of a last-gasp winner. Despite running tirelessly all match, legs no doubt feeling like lead and lungs pumping acid, Adams emerged from nowhere to steal the ball from the five-time Champions League winner with a precise tackle.

It capped an all-action display from the 23-year-old Adams which included winning 83.3% of his attempted tackles, six recoveries and two interceptions, according to stats website FotMob. The Leeds United midfielder pulled the strings in the center of the pitch all match, disrupting Wales with astute positional awareness and feeding his more attack-minded teammates like Weah and Christian Pulisic. That the performance didn’t end with victory likely hurts Adams deeply.

“I want to be a winner, I’m very competitive,” Adams said after he was unveiled as Team USA captain on Sunday. “I want to hold the guys around me to the same standard. I don’t want to lose and then have to point the finger and say, `You let me down today.′”

Read More: Your Complete Guide to the U.S. Men’s National Team at the 2022 World Cup in Qatar

Nobody knows whether Adams felt so compelled following Sunday’s display, when Team USA totally dominated the first half but wilted under sustained Welsh pressure in the second. Adams much prefers to let his performances do the talking—a commanding presence that spurred U.S. coach Gregg Berhalter to make him America’s youngest World Cup captain since Walter Bahr in 1950.

“Tyler’s a guy that’s just mature beyond his years,” Berhalter said on Sunday. “Teammates know exactly what they’re going to get from him. They know that he’s going to go out on the field and compete … He’s a guy that people get behind.” 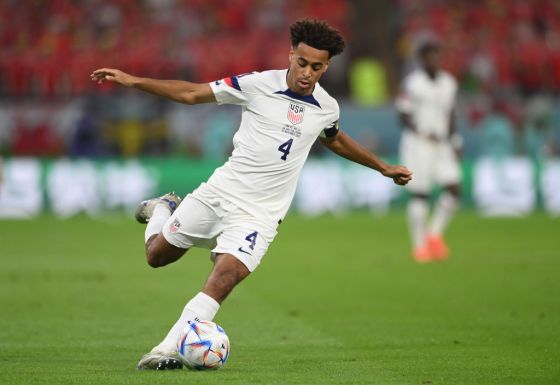 (Stu Forster—Getty Images)USA captain Tyler Adams in action during the match between USA and Wales at Ahmad Bin Ali Stadium on November 21, 2022.

Adams grew up around 50 miles north of New York City in Wappingers Falls, a quaint upstate village of antique stores and redbrick coffee shops. He began playing with the New York Red Bulls youth academy at 12 years old, though like many teens, continued to play multiple sports. He credits basketball for imbuing his all-action, box-to-box soccer technique.

“You literally spend most of your life outdoors where I’m from,” Adams told TIME in an exclusive interview Nov. 3. “I don’t remember my mom ever allowed me to be inside. I have three brothers so we’re always doing something cool.”

After signing his first professional contract with the Red Bulls’ second-tier team at just 16, Adams worked his way up to the senior MLS team. In 2019, he joined RB Leipzig, an affiliate club in Germany’s top-flight Bundesliga. There, he won a German Cup and put in some eye-catching performances in Europe’s apex Champions League.

Red Bull’s sprawling sporting interests—the Austrian-Thai behemoth has stakes in five soccer clubs across Europe and the Americas, and until 2014 also a team in Africa, Red Bull Ghana—are controversial amongst traditionalists who accuse them of eroding fans’ links to clubs in favor of corporate uniformity. But Adams only has positive words for the training and progress he’s acquired. “I have to thank Red Bull for almost everything,” he says. “They gave me all the opportunities that I had in my professional career before I made the move to Leeds.”

That move came this summer for a reported $24 million transfer fee and reunited Adams with Jesse March, his former New York Red Bull coach. Marsch gave Adams his first team debut in a friendly against Chelsea aged just 16—during which Adams scored in a 4-2 win—and his MLS debut a year later. (His first senior cap for the U.S. came just one year later at 18.)

“Tyler’s mentality is he wants to be the best,” Marsch tells TIME. “[He has] confidence, athleticism, clarity, aggressiveness, and quality. He has a real possibility of becoming a big player.”

Adams believes the transition from Germany to English Premier League (EPL) has added new elements to his game. “I love it,” he says. “I think it’s a league that suits the way that I play a lot. [But] playing in the Champions League and playing in the Bundesliga is a very high level as well.”

Adams has settled well into life in Leeds, living with his longtime girlfriend and their pet Rottweiler, Elsa. He has also been helped by the club’s recruitment of Team USA teammate Brenden Aaronson, a 22-year-old playmaker from southern New Jersey who signed in May for $30.2 million—the second-highest fee ever paid for an American. At the last national training camp, whenever anyone saw Adams loitering somewhere, the joke was that he was always waiting for Aaronson. “They were like, ‘Oh my god you guys are so f—ing close now!’” laughs Adams. “[Aaronson] has a bubbly personality, so we bounce well off each other.”

A string of player-of-the-match performances for Leeds has secured his place in the hearts of fans. “He’s been a really consistent performer, putting in seven or eight out of 10 displays in each game,” says Chris Harvey, of the Leeds United Supporters Trust. “I’ve not really seen him found wanting whatsoever and he seems to set the tone for what we’re about.”

If there was one moment that cemented Leeds fans’ appreciation for Adams, it was his lung-busting performance in October’s 2-1 victory over title challengers Liverpool. Following that match, Adams was overheard shouting near the dressing room: “Three points—let’s get the f–k out of here!” For a Yorkshire club rooted in working-class grit, of cloth caps and pints of warm bitter, the local beer, it showed the no-nonsense American just got it. 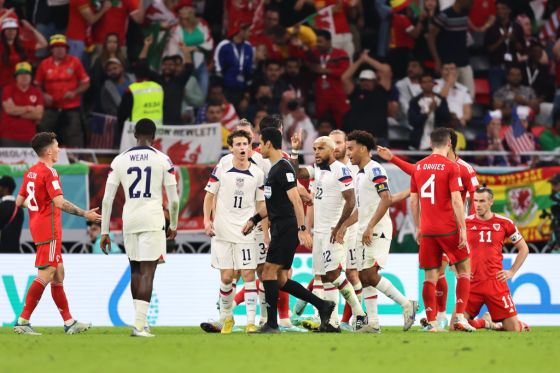 Youssef Loulidi—Fantasista/Getty ImagesUSA’s Tyler Adams and Brenden Aaronson are seen among players appealing Referee Abdulrahman Al Jassim of Qatar’s decision to award Wales a penalty for a foul on November 21, 2022.

Despite the disappointing result with Wales, qualifying from the group stage is “100% the goal,” says Adams. “We definitely see ourselves matching up well against teams that we have in our group, not only with our style of play, but with the players that we have.”

Plenty of others are lauding Adams after his display against Wales, though the challenge now is to ensure his teammates maintain similar levels. Of course, the most important thing was not to lose. “Obviously we’re a young team, but we’re ambitious,” says Adams. “So you have to treat the group stage like the first part of the tournament. And once you qualify out of the group stage, anything can happen.”

Adams’ role with the national team differs from that he plays with Leeds, where Marsch employs a high pressing style that focuses on winning balls in the opponent’s half and quick transitions that turn defensive situations into lightning counters. Berhalter also values a high-energy approach, though he’s more focused on retaining possession and building methodically.

“With Gregg, it’s: how tactically can you disorient the opponent? Which player is going here? Why are they going there?,” explains Adams. “But I’ve learned a lot from both the managers in different ways.”

Given Adams is now testing himself against players from England’s team week after week, the USA-England match on Nov. 25 is the encounter that excites him most. “It will be a good one,” he grins. “Obviously, I’m more familiar with the players now that I’ve had an opportunity to play against them in the [premier] league.”

That the match comes a day after Thanksgiving adds extra spice, if any was needed, and the holiday means it’s expected to be one of the highest-viewed soccer matches in American history.

Though the team will have to delay their turkey feasting for a couple of days, “I think the day after we play England, we’ll have our families together to celebrate Thanksgiving as a team,” he says. “It will be a pretty special moment.” And even more so if they have three points to toast.