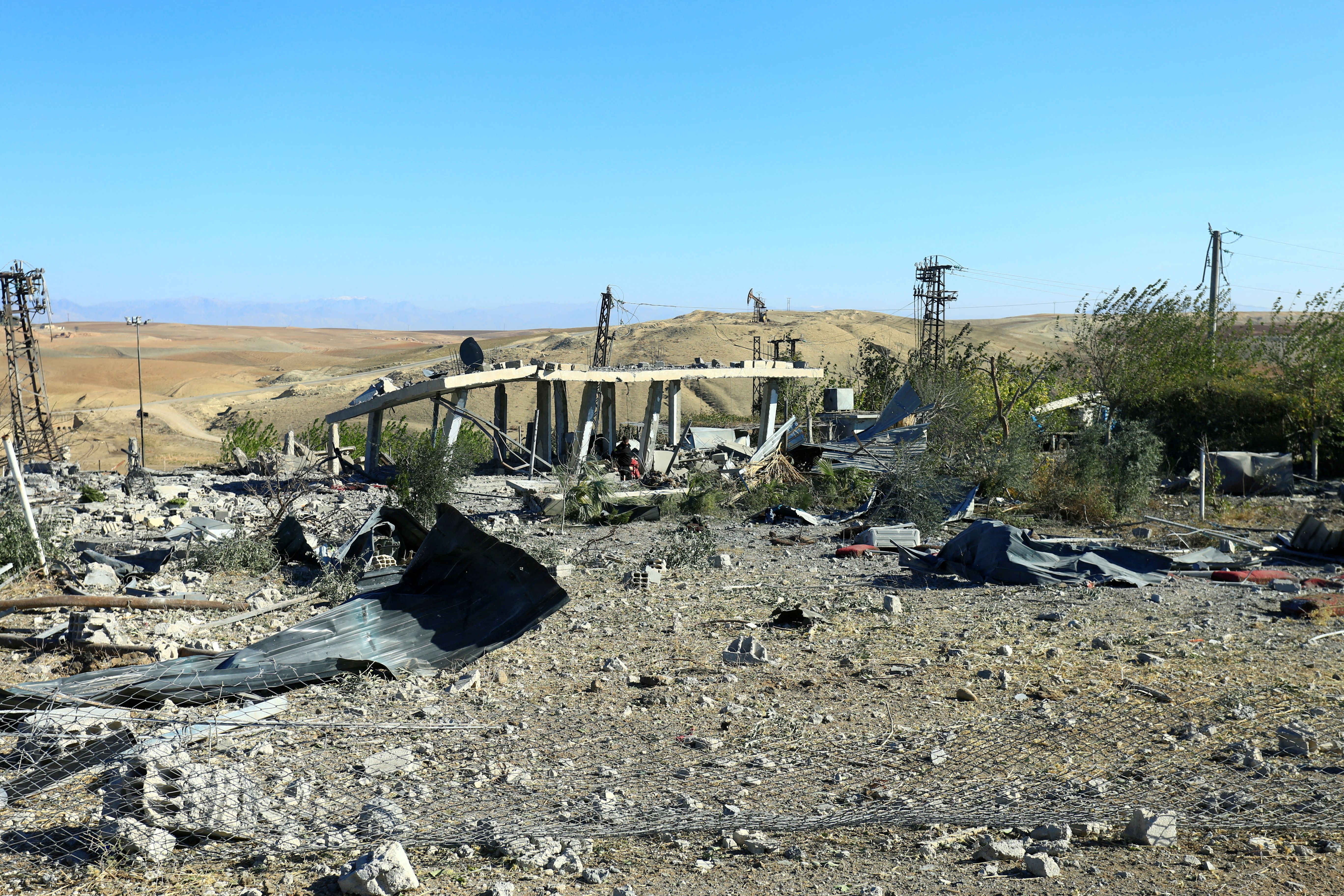 A view shows the aftermath of airstrikes, which Turkey’s defence ministry says it carried out, in Derik, Syria, November 20, 2022. North Press Agency/Handout via REUTERS

Turkey’s warplanes crossed into Russian and U.S.-controlled airspace for the first time to attack the Kurdish YPG militia in Syria, and it has rallied Syrian allies to possibly expand the campaign, several Turkish and Syrian rebel sources said.

The F-16 jet raids happened in the last few days as Turkey and the YPG escalated tit-for-tat strikes that have killed civilians on both sides of the border, set off when Ankara said it was retaliating after a deadly Nov. 13 bombing in Istanbul.

While Turkey has conducted several large operations into northern Syria in recent years, it had used drones for many air strikes given that Washington, which is allied with the YPG-led Syrian Democratic Forces (SDF), and Damascus-ally Moscow control much of the airspace.

Turkey’s reported use of Russian and U.S.-controlled airspace could indicate Ankara’s increasing clout with Moscow and Washington. NATO member Turkey has conducted a diplomatic balancing act since Russia invaded Ukraine, criticising the invasion but opposing Western sanctions on Russia.

Russia’s defence ministry and the U.S. State Department did not immediately respond to requests for comment.

A Turkish defence ministry source said jets were never used in Syrian, Russian or U.S. airspace for the latest airstrikes on Kurdish militant bases in Syria, and that jets hit all targets from within Turkish airspace.

Yet a senior Turkish security official and two senior Syrian opposition figures in touch with the Turkish military told Reuters that jets flew into Syrian territory controlled by the U.S.-backed YPG and that Ankara was in particular in touch with Russia about this.

“Turkish jets used the airspace under the control of the United States and Russia. Some coordination was made with these two countries,” the Turkish security official said.

“The Turks coordinated with the Russians and the Americans in the areas they have control over Syrian airspace,” said Colonel Abduljabbar Akaidi, a senior Syrian opposition figure familiar with the latest developments.

Hande Firat, a prominent Turkish journalist with close links to government, separately wrote in the Hurriyet newspaper: “The USA and Russia, the two countries which control Syrian airspace, had to open the airspace” after the Istanbul attack.

Ankara said its weekend operation was retaliation for the bomb set off on a busy Istanbul avenue last week that killed six people, and which authorities blamed on the militants.

No one has claimed responsibility and the outlawed Kurdistan Workers Party (PKK) and the SDF have denied involvement.

Turkish artillery kept up bombardment of Kurdish bases and other targets in Syria on Tuesday, while Defence Minister Hulusi Akar called on the United States to halt support for the YPG.

The United States allied with the YPG-led SDF in the fight against Islamic State in Syria’s 11-year war, causing a deep rift with Turkey, which says YPG is a wing of the PKK. Turkey, the United States and others deem the PKK a terrorist group.

Washington has warned against military action that would destabilise Syria while Moscow has urged Ankara and other parties to show restraint.

But the commander of a Turkey-backed rebel faction and two Turkish sources said fighters from a coalition of armed Syrian opposition groups known as the Syrian National Army, allied with Ankara, have been asked to prepare for a potentially expanded operation.

“The Turks notified all the commanders who are on leave to return to their posts and those in Syria not to leave and also to raise their level of preparedness,” the senior commander said under condition of anonymity because he is not authorized to publicly speak on this matter.

“They have not been assigned tasks nor is there a plan yet,” he added.

The Turkish security source and a separate senior Turkish official said Syrian proxies have been readied, though no timetable had been set and no final decision has been made.

In May, Turkish President Tayyip Erdogan vowed to launch an incursion into Syria, raising preparations among Syrian proxies, though no operation was launched. Erdogan said on Monday that the current air campaign could expand to a ground offensive.

The Istanbul bombing evoked memories of violence ahead of tense 2015 elections, and could lead to another security-focused campaign for Erdogan, ahead of tight elections next June.