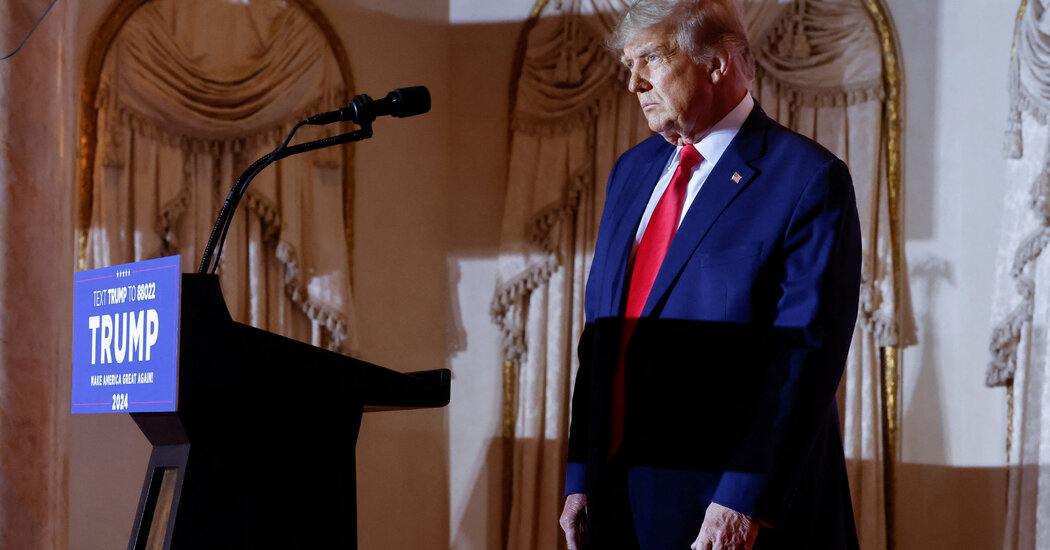 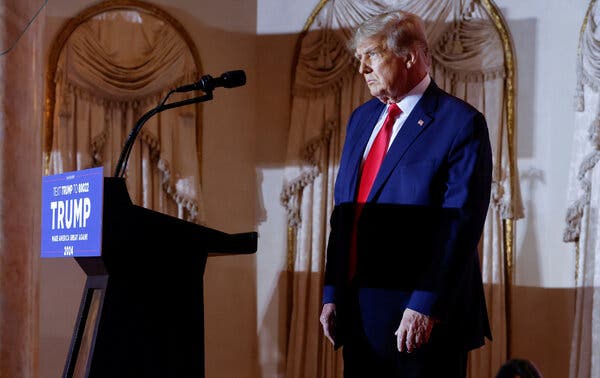 The defiant timing of Donald Trump’s announcement of his candidacy for president in 2024, dropping amid Republican recriminations over their midterm disappointments, is an admission of weakness poorly disguised as a show of strength.

The intended flex is obvious: The early announcement is meant to cow potential rivals, force them to come off the blocks explicitly running against him, seize the media spotlight, run up endorsements and fund-raising totals, and hopefully elevate the former president in national polling.

It’s also intended as a pre-emptive political strike against any potential indictment that might be awaiting him, assuring Republican primary voters that the Biden Department of Justice is coming after him only because they want to keep him from the White House.

Even before the midterm results, though, it was a sign of Trump’s potential weakness that such calculation was even necessary. If the former president were as strong as he wished everyone to imagine him to be, he could have afforded to wait in Mar-a-Lago, accepting supplicants, while any pretenders exhausted themselves with futile campaigning and the people clamored for their once and future king.

Instead, he decided on this move, telegraphing it before the midterms, because his position had steadily weakened over the course of 2022. The emergence of Gov. Ron DeSantis of Florida as the singular, popular, potentially deep-pocketed rival, the drip-drip of state polling showing DeSantis competitive with Trump, the uncertain politics of a potential prosecution, the pre-election polling showing more Republicans identifying with their party than with Trump — it all created a scenario in which the former president remained the favorite, but he clearly needed to do more to win than simply show up.

And now the results of the election, the DeSantis landslide in Florida and the consistent underperformance of Trump-associated Republican candidates nationwide, have made it uncertain whether the former president should even be considered the 2024 favorite anymore. This isn’t just a matter of Trump-skeptical conservatives griping on Twitter or anonymous Republican politicians hoping vaguely that this time will be different; a pair of postelection surveys of potential GOP voters, one national and one of delegate-rich Texas, show DeSantis suddenly in the lead. So do polls of early primary and caucus states commissioned by the Club for Growth — a formerly Trump-allied outfit, now increasingly aligned against him.

A Politico-Morning Consult poll released today shows Trump leading DeSantis nationally 47 to 33 percent, so it’s too soon to talk about Trump as a primary-season underdog. But even that poll suggests he’s starting under 50 percent, despite a claim to incumbency and universal name recognition, which suggests a difficult battle for the nomination rather than an easy coast or coronation.

This means, among other things, that the campaign that he just began — in a notably low-energy style, it must be said — will need an actual strategy. And here the very Trumpification of the G.O.P., the routing of his enemies and the burial of the older models of Republicanism, may work against his attempted restoration. As David Byler of The Washington Post noted in a shrewd summertime column, by remaking the party in his own image, Trump has potentially given some of his supporters permission to look elsewhere in 2024.

Much of Trump’s success in 2016, Byler pointed out, rested on his distinctiveness within that year’s G.O.P. field. This wasn’t just a matter of his celebrity status or his zest for demagogy. He also tapped into a fundamental policy mismatch between the Republican Party and many of its voters, by running to the party establishment’s right on immigration and somewhat to its left on issues like foreign policy, health care and entitlement reform.

Flash forward to 2022, however, and those contrasts have diminished. On substance and style alike, the party and its leaders moved closer to Trump during his presidency; at the same time, by governing as a fairly conventional Republican — tax cuts, yes; infrastructure, not so much — Trump also moved closer to the party. This convergence has left rank-and-file Republicans more satisfied with the G.O.P. than they were in 2016, while depriving Trump of signature issues that might set him apart from a figure like DeSantis. And the main exception, his determination to relitigate the 2020 election, isn’t obviously a high priority even within the Republican Party — and it’s likely to be less of one now that so many “Stop the Steal” candidates have gone down to general-election defeat.

This vulnerability need not be fatal to his second coming. Trump’s mythic narrative — the wronged and exiled king returning to claim his throne — remains potent, and his adaptable ruthlessness has not yet been turned to the task of making DeSantis look like the smaller, weaker man.

But running on the mythos alone, making the primary a crude test of loyalty while bragging about his past glories and accomplishments, probably isn’t enough to defeat a disciplined primary rival with unified establishment support. And it also sets up Trump poorly for a general election, should he eke out a victory. In 2016, his primary-season populism, anti-establishment and anti-globalization, segued naturally into the general election pitch that helped him win the Midwest, and with it the electoral college. It’s hard to see a similar segue from a primary season message fixated on voter-fraud conspiracy or endlessly replaying his first term’s greatest hits.

So to the extent that Trump and his team are capable of executing a strategy, they will be looking for versions of what he found six years ago: opportunities to outflank a more establishment Republican in multiple directions, from the right one moment and the left the next.

Those opportunities will depend on the specific positions that DeSantis or some other rival (but come on, it can really only be DeSantis) ends up taking. For example, Trump’s announcement speech’s boast about his record of peacemaking previews a scenario where the Ukraine war drags on while a potential Taiwan crisis continues to percolate, Beltway Republicans continue to take a generally hawkish line (the populist flank in the House notwithstanding) and Trump pitches himself as the peace candidate, the tough guy who can make the necessary deals with Vladimir Putin and Xi Jinping to stabilize the world.

Or in domestic policy, you can imagine a world in which the desire to appear tough on inflation tugs Republicans toward austerity politics, allowing Trump to pull off some shamelessly dishonest posturing: We replaced Obamacare with Trumpcare, it’s beautiful and it works, and now a bunch of Swamp Creatures and Ron DeSanctimonious want to take it away. Which then could be paired with some extreme and shocking gesture that even a practiced culture-warrior like DeSantis might be loath to imitate, some variation on the Muslim ban.

We don’t know what that gesture might be, but that’s the point — just the original idea of a Muslim ban was an on-the-fly response to Islamist terrorism, the headlines of 2023 will presumably offer something suited to Trump’s instincts.

It’s those instincts, ultimately, that were decisive in the destruction of Jeb Bush, Marco Rubio and Ted Cruz in 2016 — the shamelessness, the cunning, the ideological flexibility, the quick sizing-up opponents’ weaknesses. Does Trump still have them sharp and ready? Is he too deep in his labyrinth of self-pity and conspiracy?

Lucky America; lucky Republican Party; lucky, lucky media: Everyone gets to spend the next year and more finding out.