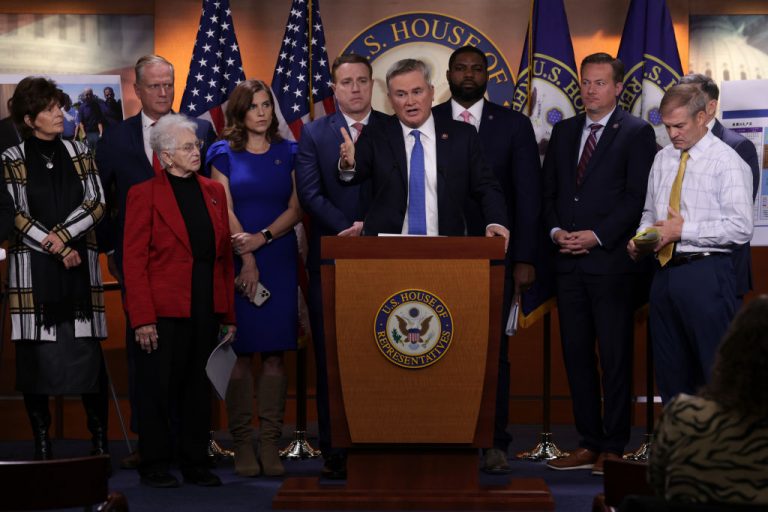 House Republicans on Thursday laid out plans to investigate Joe and Hunter Biden’s foreign business dealings, calling the probe “a top priority” for the GOP in the new Congress.

Rep. James Comer (R., Ky.), who will chair the House Oversight Committee next year, said Republicans will explore “all avenues” of the Biden family’s business activity in China and Ukraine. Comer alleged that President Biden has “lied” by claiming he never discussed business with his son.

“This is an investigation of Joe Biden, the president of the United States, and why he lied to the American people about his participation in his family’s international business schemes,” said Comer, who claimed the committee has uncovered evidence that Hunter Biden committed wire fraud and violated foreign agent laws.

Republicans are launching the full-scale probe amid an ongoing federal investigation of Hunter Biden. Federal prosecutors have been investigating Biden since 2018 for potential tax evasion and violations of the Foreign Agents Registration Act. But reports have raised concerns that prosecutors are going to go easy on the younger Biden. Prosecutors are reportedly considering charges against Biden related to his taxes and to a gun incident from 2018.

Republicans say they are concerned not only that Joe Biden may have lied about his involvement in his son’s dealings, but that they posed potential national security risks.

A Republican congressional report released Thursday said that “evidence indicates that President Joe Biden personally participated in and benefitted from these financial ventures, leaving him open to influence, blackmail, or extortion by malign or foreign entities such as the CCP.”

A focal point of the investigation will be Hunter Biden’s work with CEFC China Energy, an energy conglomerate with ties to Chinese intelligence. The company paid Hunter Biden at least $6 million in 2017 to scout out energy investment deals. Biden was paid another $1 million to provide legal services for a CEFC executive who was charged with attempting to bribe African officials for mining rights. One of Hunter’s former business partners, Tony Bobulinski, has released text messages indicating that he met with Hunter and Joe Biden in 2017 to discuss a multimillion-dollar deal with CEFC.

Hunter Biden and his business partners repeatedly lobbied federal agencies to advance their financial interests. In 2015, the Biden consortium lobbied the State Department to forge a relationship with a Chinese Communist Party front group, the Chinese People’s Association for Friendship with Foreign Countries, in order to help their investment fund gain access to China.

Comer said the committee will renew requests to federal agencies for Hunter Biden’s bank records, which he said will show whether the Bidens were “compromised or swayed by foreign dollars.” According to Comer, the Biden administration has refused congressional requests for 150 Suspicious Activity Reports that banks have filed against Hunter Biden for suspicious bank transactions.

Comer detailed two Suspicious Activity Reports that the committee has reviewed. One involved Biden’s wire transfers to an escort service. Another flagged 93 wires between Feb. 2014 and Aug. 2019 totaling $2,461,962 involving Biden’s activities in China. The report, filed by Biden’s bank, J.P. Morgan, referred to him as a “politically exposed person.”

President Bided laughed off Republican plans to investigate his son last week, telling reporters that the American public “wants us to move on.”