Residents in Ukraine’s southern city of Kherson call the two-storey police station “The Hole”. Vitalii Serdiuk, a pensioner, said he was lucky to make it out alive.

“I hung on,” the retired medical equipment repairman said as he recounted his ordeal in Russian detention two blocks from where he and his wife live in a tiny Soviet-era apartment.

The green-roofed police building at No. 3, Energy Workers’ Street, was the most notorious of several sites where, according to more than half a dozen locals in the recently recaptured city, people were interrogated and tortured during Russia’s nine-month occupation. Another was a large prison.

Two residents living in an apartment block overlooking the police station courtyard said they saw bodies wrapped in white sheets being carried from the building, stored in a garage and later tossed into refuse trucks to be taken away.

Reuters could not independently verify all of the events described by the Kherson residents.

The Kremlin and Russia’s defence ministry did not immediately respond to questions about Serdiuk’s account or that of others Reuters spoke to in Kherson.

Moscow has rejected allegations of abuse against civilians and soldiers and has accused Ukraine of staging such abuses in places like Bucha.

On Tuesday, the U.N. human rights office said it had found evidence that both sides had tortured prisoners of war, which is classified as a war crime by the International Criminal Court. Russian abuse was “fairly systematic“, a U.N. official said.

As Russian security forces retreat from large swathes of territory in the north, east and south, evidence of abuses is mounting.

Those held in Kherson included people who voiced opposition to Russia’s occupation, residents, like Serdiuk, believed to have information about enemy soldiers’ positions, as well as suspected underground resistance fighters and their associates.

Serdiuk said he was beaten on his legs, back and torso with a truncheon and shocked with electrodes wired to his scrotum by a Russian official demanding to know the whereabouts and unit of his son, a soldier in the Ukrainian army.

“I didn’t tell him anything. ‘I don’t know’ was my only answer,” the 65-year-old said in his apartment, which was lit by a single candle.

Grim recollections of life under occupation in Kherson have followed the unbridled joy and relief when Ukrainian soldiers retook the city on Friday after Russian troops withdrew across the Dnipro River.

President Volodymyr Zelenskiy said two days later that investigators had uncovered more than 400 Russian war crimes and found the bodies of both servicemen and civilians in areas of Kherson region freed from Russian occupation.

“I personally saw five bodies taken out,” said Oleh, 20, who lives in an apartment block overlooking the police station, declining to give his last name. “We could see hands hanging from the sheets and we understood these to be corpses.”

Speaking separately, Svytlana Bestanik, 41, who lives in the same block and works at a small store between the building and the station, also recalled seeing prisoners carrying out bodies.

“They would carry dead people out and would throw them in a truck with the garbage,” she said, describing the stench of decomposing bodies in the air. “We were witnessing sadism in its purest form.”

Reuters journalists visited the police station on Tuesday but were prohibited from going beyond the courtyard, rimmed by a razor wire-topped wall, by armed police officers and a soldier who said that investigators were inside collecting evidence.

One officer, who declined to give his name, said that up to 12 detainees were kept in tiny cages, an account corroborated by Serdiuk.

Neighbours recounted hearing screams of men and women coming from the station and said that whenever the Russians emerged, they wore balaclavas concealing all but their eyes.

“They came in the shop every day,” said Bestanik. “I decided not to talk to them. I was too afraid of them.”

Aliona Lapchuk said she and her eldest son fled Kherson in April after a terrifying ordeal at the hands of Russian security personnel on March 27, the last time she saw her husband Vitaliy.

Vitaliy had been an underground resistance fighter since Russian troops seized Kherson on March 2, according to Lapchuk, and she became worried when he did not answer her phone calls.

Soon after, she said, three cars with the Russian “Z” sign painted on them pulled up at her mother’s home where they were living. They brought Vitaliy, who was badly beaten.

The soldiers, who identified themselves as Russian troops, threatened to smash out her teeth when she tried to berate them. They confiscated their mobile phones and laptops, she said, and then discovered weapons in the basement.

They beat her husband in the basement savagely before dragging him out.

“He didn’t walk out of the basement; they dragged him out. They broke through his cheek bone,” she said, sobbing, in the village of Krasne, some 100 km (60 miles) west of Kherson.

Lapchuk and her eldest son, Andriy, were hooded and taken to the police station at 4, Lutheran Street, in Kherson where she could hear her husband being interrogated through a wall, she said. She and Andriy were later released.

After leaving Kherson, Lapchuk wrote to everyone she could think of to try and find her husband.

On June 9, she said she got a message from a pathologist who told her to call the next day. She knew immediately Vitaliy was dead.

His body had been found floating in a river, she said, showing photographs taken by a pathologist in which a birth mark on his shoulder could be seen.

Lapchuk said she paid for Vitaliy to be buried and has yet to see the grave.

She is convinced her husband was betrayed to the Russians by someone very close to them.

Ruslan, 52, who runs a beer store opposite the police station where Serdiuk was held, said that at the beginning of the occupation, Russian-made Ural trucks would pull up daily before the grey front door.

Detainees, he said, would be hurled from the back, their hands bound and heads covered by bags.

Serhii Polako, 48, a trader who lives across the street from the station, echoed Ruslan’s account.

He said that several weeks into the occupation, Russian national guard troops deployed at the site were replaced by men driving vehicles embossed with the letter “V”, and that was when the screams started.

About two weeks ago, he said, the Russians freed those being kept in the station in apparent preparation for their withdrawal.

“All of a sudden, they emptied the place, and we understood something was happening,” he told Reuters.

Serdiuk believes he was betrayed by an informant as the father of a Ukrainian serviceman.

He said Russian security personnel handcuffed him, put a bag over his head, forced him to bend at the waist and frog-marched him into a vehicle.

At the station, he was put in a cell so cramped that the occupants could not move while lying down. On some days, prisoners received only one meal.

The following day, he was hooded, his hands bound, and taken down to a cellar room. The interrogation and torture lasted about 90 minutes, he said.

His Russian interrogator knew all of his details and those of his family, and said that unless he cooperated, he would have his wife arrested and telephone his son so he could hear both of them screaming under torture, Serdiuk said.

Two days later, he was released without explanation. His wife found him outside the shop in which Bestanik works, virtually unable to walk. 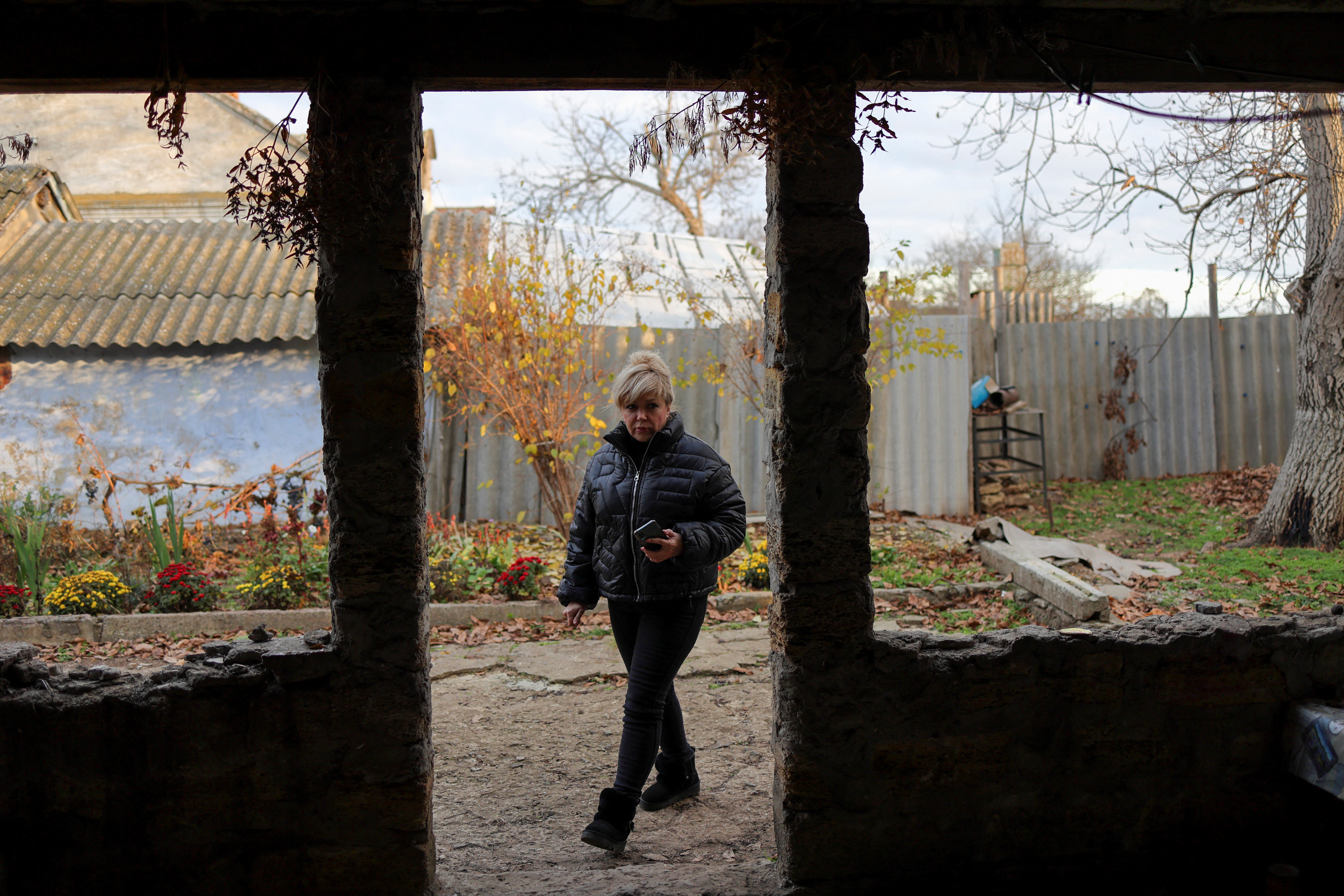 Aliona Lapchuk, a 55-year-old Ukrainian woman who said her husband Vitaliy was tortured and left to die by Russian forces in Kherson at the beginning of the war, walks in the courtyard of an extended family house in Krasne in Mykolaiv region, Ukraine November 15, 2022. REUTERS/Murad Sezer 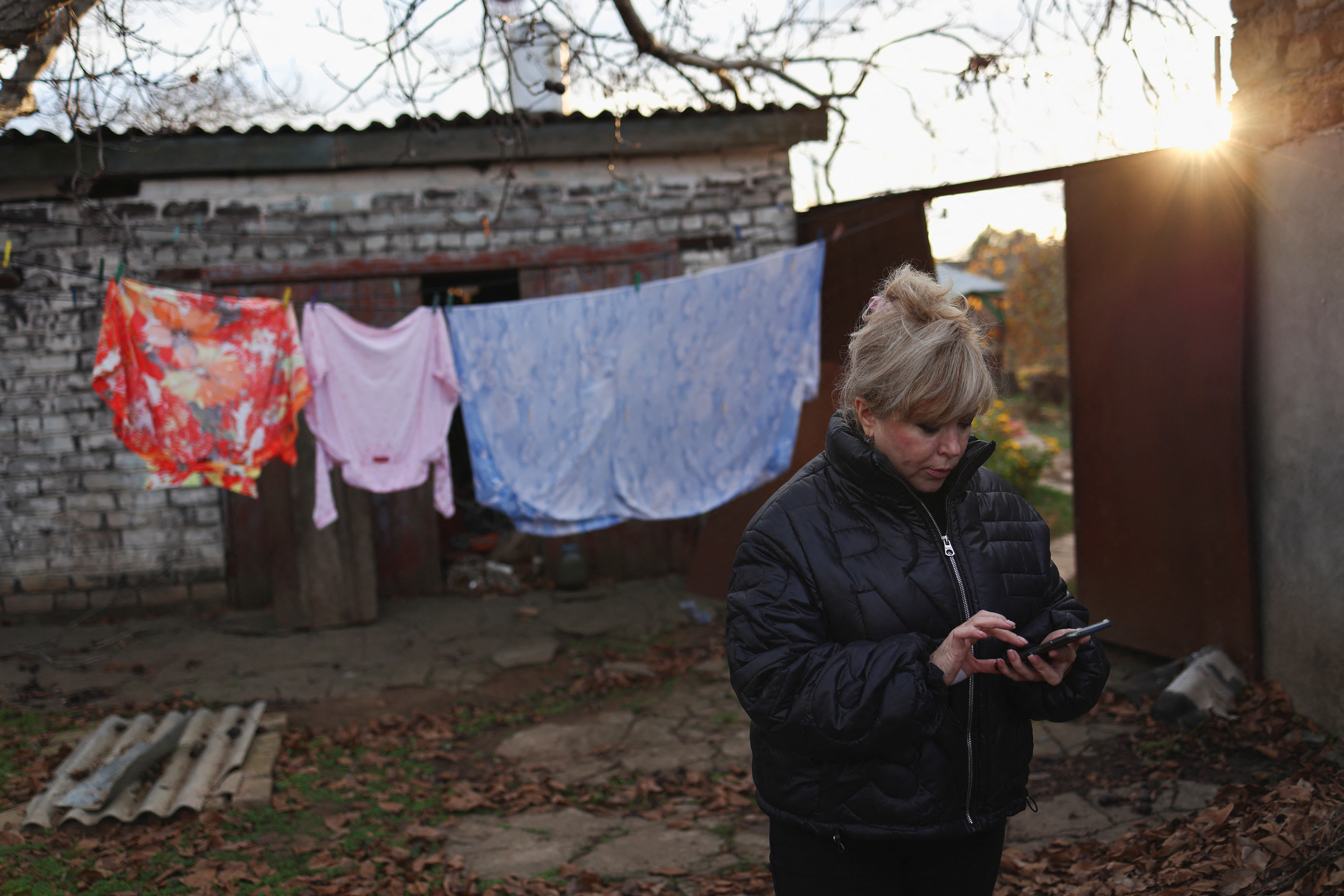 Aliona Lapchuk, a 55-year-old Ukrainian woman who said her husband Vitaliy was tortured and left to die by Russian forces in Kherson at the beginning of the war, stands in the courtyard of an extended family house in Krasne in Mykolaiv region, Ukraine November 15, 2022. REUTERS/Murad Sezer
Advertisements
Advertisements