Listen to this article
2022-11-17T21:02:00Z
U.S. House of Representatives Speaker Nancy Pelosi, the first woman to hold that influential post, said on Thursday she will step down as the Democratic leader in the chamber a day after Republicans secured a narrow majority following the midterm elections.

Nancy Pelosi, the trailblazing Democrat who as the first woman U.S. House of Representatives speaker shepherded landmark legislation and led two impeachments, said on Thursday she will give up her leadership role a day after Republicans secured control of the chamber.

Pelosi’s allies quickly rallied around Representative Hakeem Jeffries as her likely successor as the top House Democrat while Republicans prepared to install a speaker from their party who is expected to impede President Joe Biden’s legislative agenda. Her replacement will have to unite fractious House Democrats torn between centrists and an increasingly vocal left flank.

A 82-year-old California liberal, Pelosi made her announcement during a speech on the House floor – drawing applause from Democrats even as many Republicans decided not to attend. She said she will not retire from the House but continue to represent San Francisco as she has done for 35 years.

In two stints as speaker, Pelosi played a central role in shepherding the legislative agenda of two Democratic presidents through Congress, even as she was vilified by many conservatives. She helped pass President Barack Obama’s signature 2010 healthcare law as well as expansions of infrastructure and climate spending and gun regulations under Biden. She also presided as the House impeached Republican President Donald Trump in 2019 and 2021.

Biden in a statement called Pelosi “the most consequential speaker of the House of Representatives in our history.”

House Democrats are set to vote on their leaders on Nov. 30. Jeffries, of New York, would be the first Black lawmaker to lead one of the major parties’ caucuses in Congress. The No. 2 House Democrat, Steny Hoyer, endorsed Jeffries for the party’s leadership post and elected not to seek a leadership job in the next Congress.

Jeffries declined to comment on his plans, telling reporters: “Today is a day to celebrate the speakership of Nancy Pelosi.”

Following last week’s midterm elections, Republicans on Wednesday finally nailed down a slim majority in the House for the next Congress to be sworn in on Jan. 3 and offered initial support for Kevin McCarthy, who has had chilly relations with Pelosi, to serve as speaker. McCarthy did not attend Pelosi’s speech.

Democrats retained control of the Senate. With a divided Congress, passage of even critical legislation like government funding could be tricky. Republicans said they plan to use their House majority to launch investigations into Biden’s administration and family.

Pelosi, holding a post second in the line of succession to the presidency, delivered a sentimental speech calling the House chamber “sacred ground” and remembering visiting the Capitol for the first time as a child when her father was sworn in as a congressman.

She recounted working with three presidents – Republican George W. Bush as well as Obama and Biden. She did not mention Trump but she alluded to the Jan. 6, 2021 attack on the Capitol by his supporters.

“American democracy is majestic, but it is fragile. Many of us here have witnessed our fragility firsthand, tragically in this chamber. And so democracy must be forever defended from forces that wish it harm,” Pelosi said.

Pelosi also noted the increase in women and minority lawmakers since she joined the House in 1987. She was the highest-ranking and most powerful elected woman in U.S. history until Kamala Harris became vice president in January 2021. She also helped the party to stem its losses during the midterms, when Democrats lost fewer seats than expected in the House.

Pelosi had been under pressure over the past few years from younger House Democrats to yield power. Jeffries, 52, would herald a new generation of House leadership for the Democrats. The party’s aging leadership has raised questions about its future even as Americans are living longer. Biden himself turns 80 on Sunday.

Ahead of her announcement, Pelosi had said the Oct. 28 assault on her husband Paul by a politically motivated hammer-wielding intruder in their San Francisco home factored in her decision.

Democrats appeared to be lining up for an orderly transition that would see Jeffries as Democratic leader and Representatives Katherine Clark, 59, and Pete Aguilar, 43, filling out the top ranks of leadership.

“It’s pretty much general agreement about who the next leaders will be. I know all of them, they’ll do a good job,” Representative Bennie Thompson told reporters.

The current No. 3 House Democrat, James Clyburn, 82, will likely stay on in an advisory role, several Democrats said.

Pelosi was first elected to the House in a 1987 special election and steadily moved up the ranks. She first served as speaker from 2007-2011, when Republicans won back control. She again became speaker again in 2019 when Democrats rode a wave of opposition to Trump to win control of the House and was re-elected as speaker in November 2021. 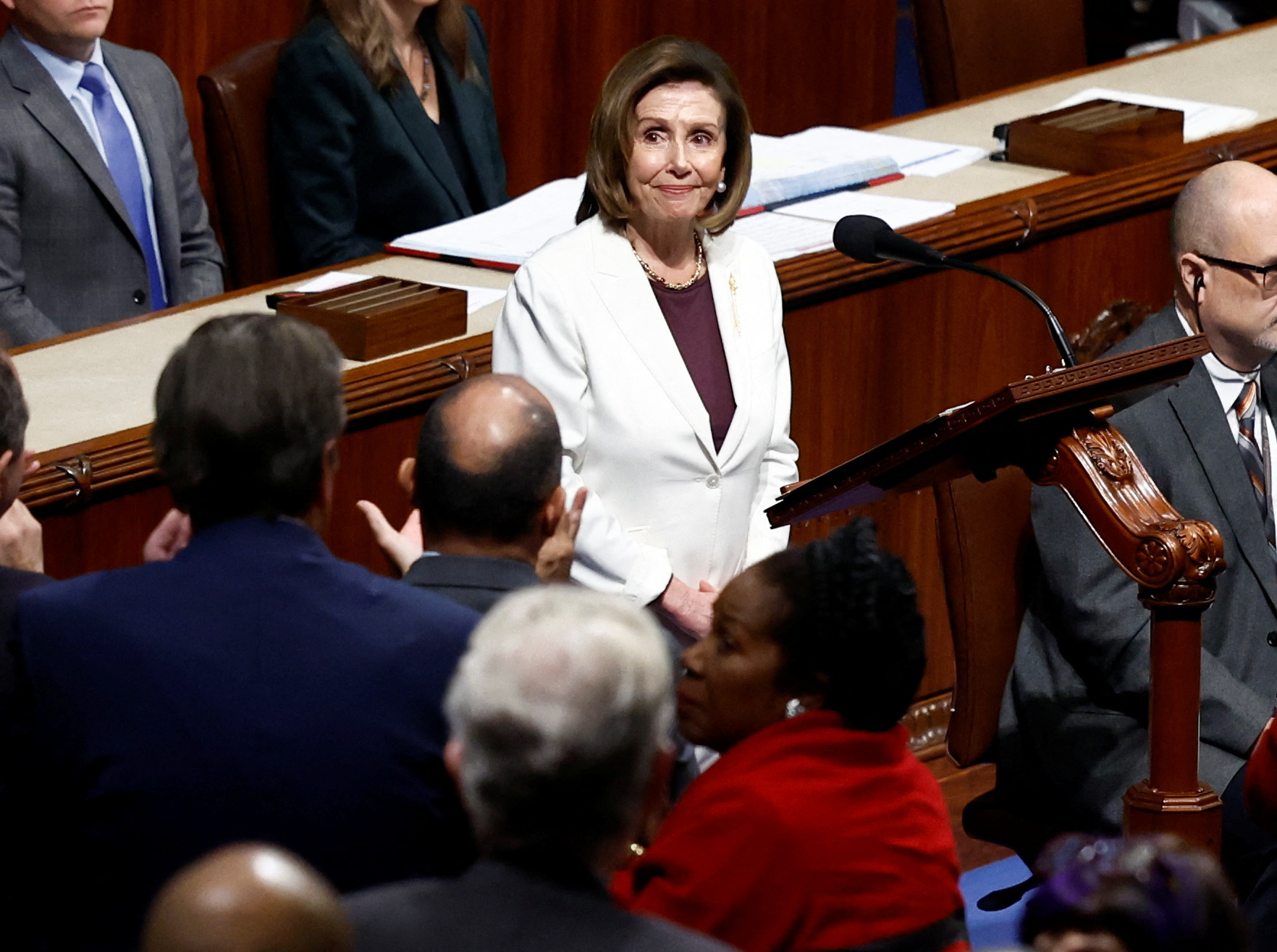 U.S. House Speaker Nancy Pelosi (D-CA) listens to applause from her House colleagues after she announced that she will remain in Congress but will not run for re-election as Speaker of the House after Republicans were projected to win control of the House of Representatives, on the floor of the House Chamber of the U.S. Capitol in Washington, U.S., November 17, 2022. REUTERS/Evelyn Hockstein 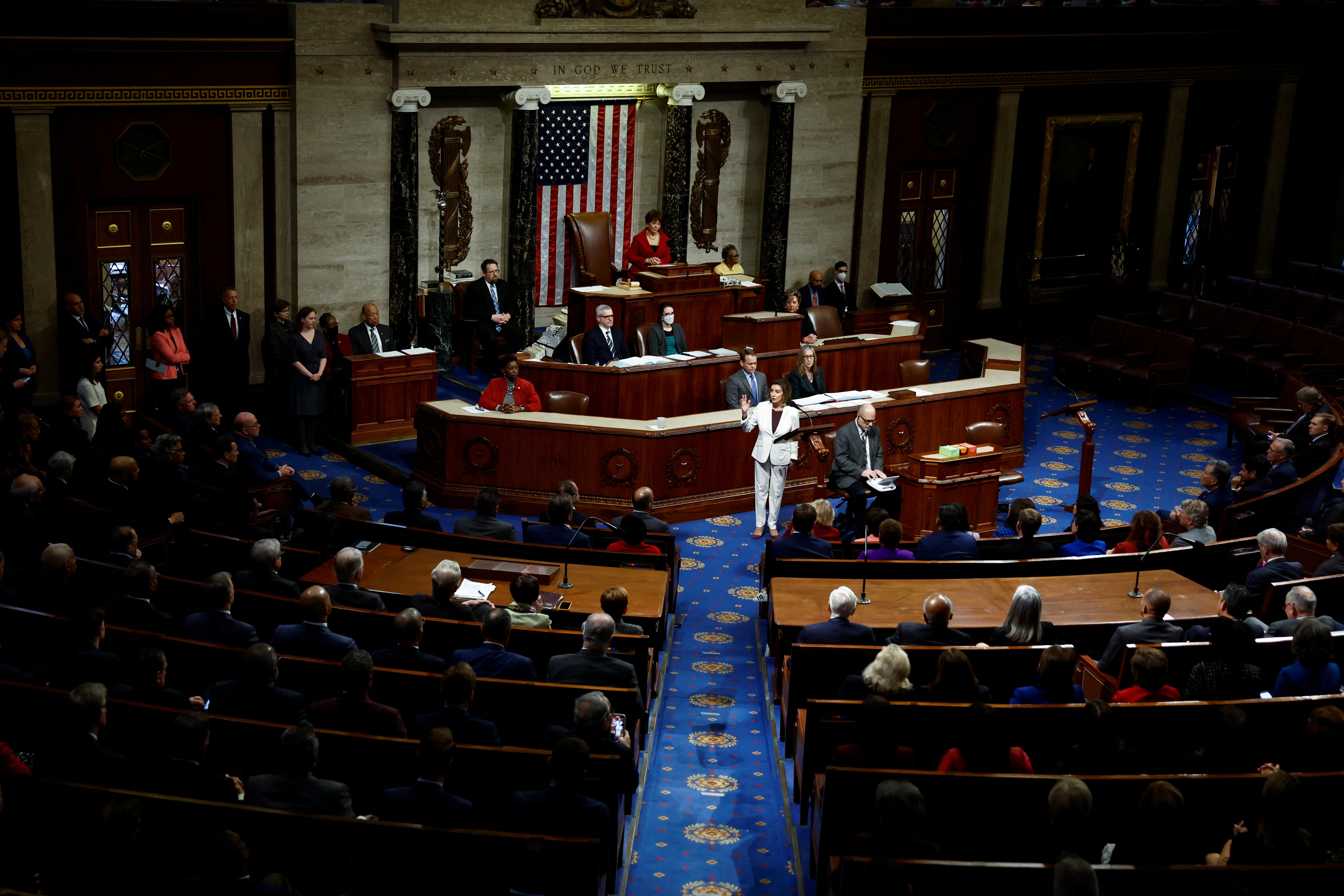 U.S. House Speaker Nancy Pelosi (D-CA) announces that she will remain in Congress but will not run for re-election as Speaker after Republicans were projected to win control of the House of Representatives, on the floor of the House chamber of the U.S. Capitol in Washington, U.S., November 17, 2022. REUTERS/Evelyn Hockstein 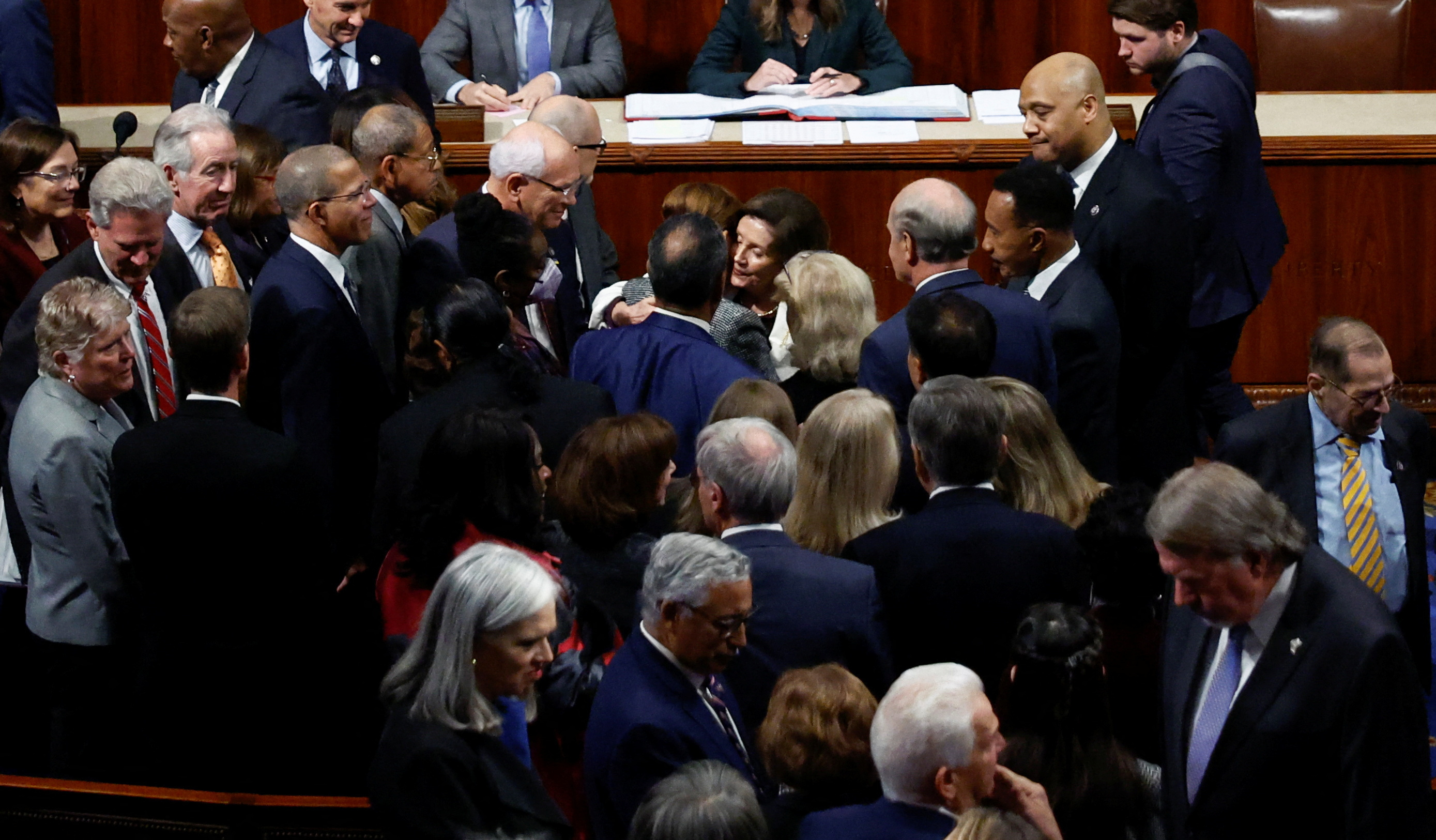 U.S. House Speaker Nancy Pelosi (D-CA) is surrounded and hugged by House colleagues after she announced that she will remain in Congress but will not run for re-election as Speaker of the House after Republicans were projected to win control of the House of Representatives, on the floor of the House Chamber of the U.S. Capitol in Washington, U.S., November 17, 2022. REUTERS/Evelyn Hockstein 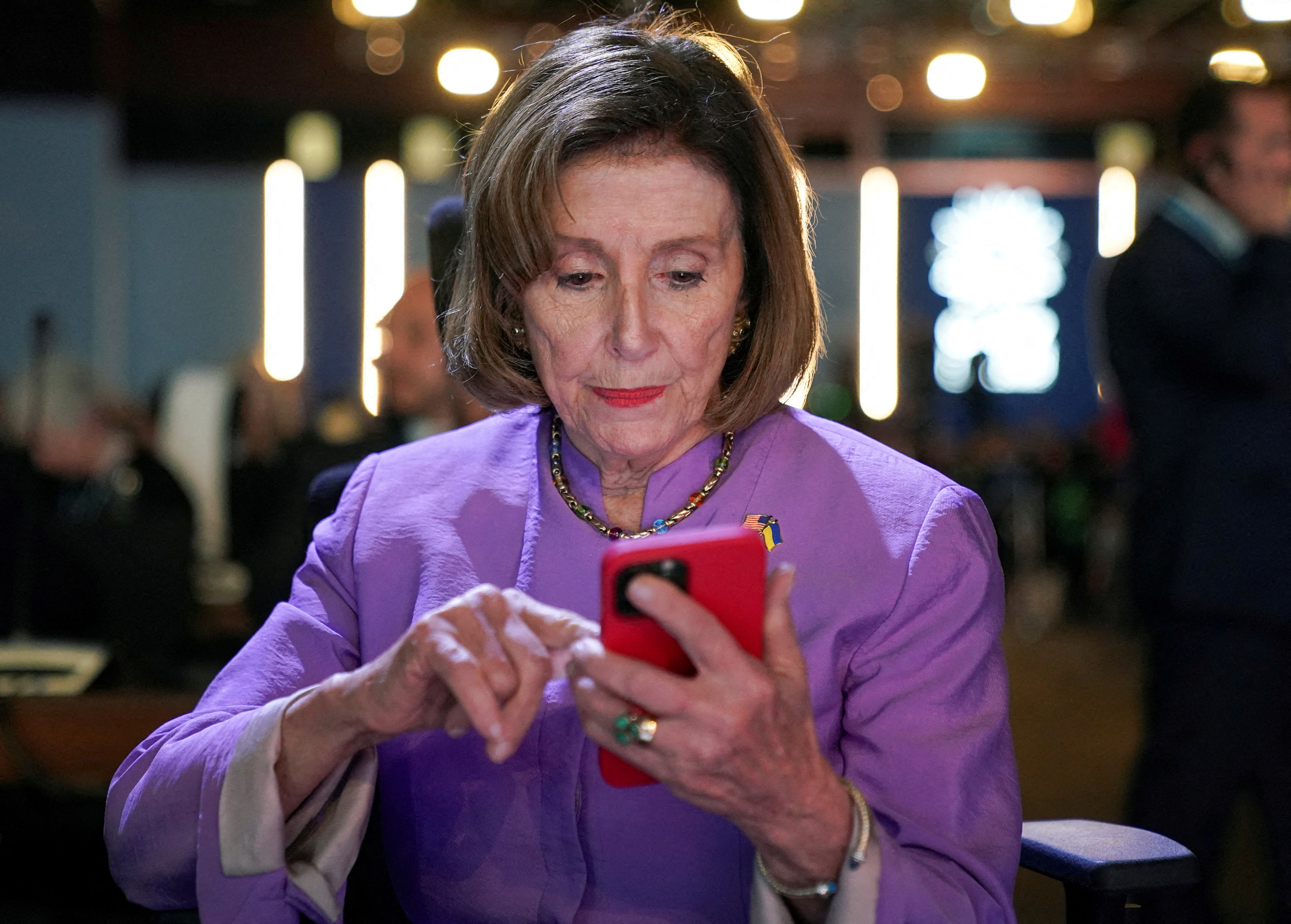 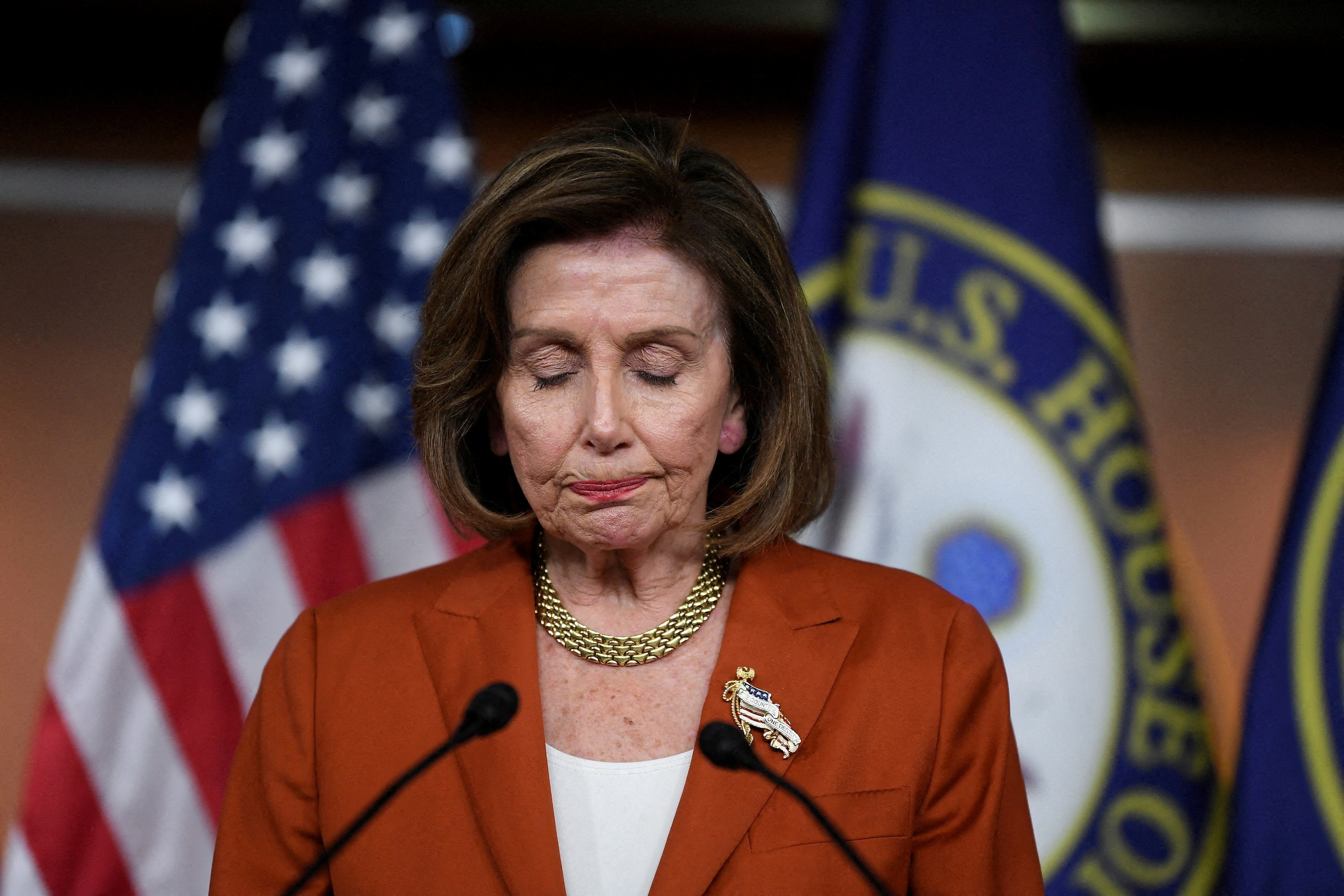 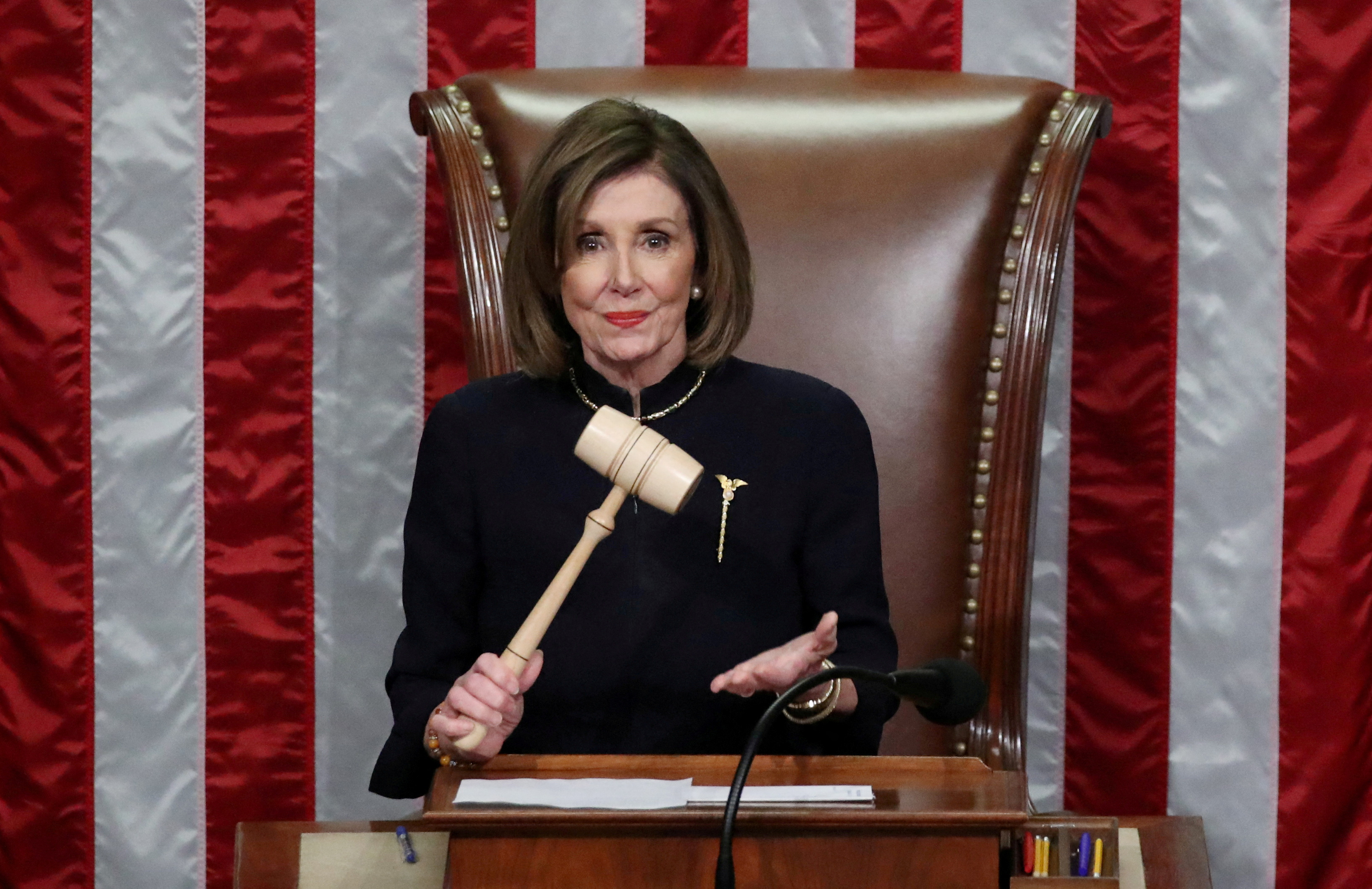 U.S. Speaker of the House Nancy Pelosi (D-CA) wields the gavel as she presides over the House of Representatives approving two counts of impeachment against U.S. President Donald Trump in the House Chamber of the U.S. Capitol in Washington, U.S., December 18, 2019. REUTERS/Jonathan Ernst/File Photo
Advertisements
Advertisements