Medics and high-risk patients are likely to receive Oxford’s Covid-19 vaccine before the end of the year, the professor leading the project said.

Adrian Hill said emergency approval would allow those most in need to receive the jab while the final trials are still under way.

Full authorisation would then follow, meaning the rest of the population could receive the vaccine from early 2021. 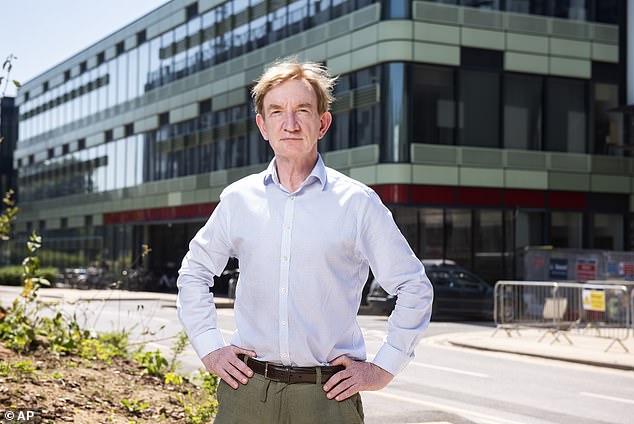 Adrian Hill (pictured), the professor leading the Oxford coronavirus vaccine programme, said patients could receive the jab by the end of the year

Professor Hill, founder and director of the University of Oxford’s Jenner Institute, admitted timing was tight to begin vaccinations before Christmas – but insisted it was indeed possible.

‘Billions of doses’ are already being produced at ten factories across the globe by a consortium led by British drugs firms AstraZeneca, he said.

In an upbeat assessment of how the vaccination programme could unfold, he said: ‘I’d be very surprised if this thing [the pandemic] isn’t very clearly on the way down by late spring, at least in this country… we will get to the stage where there is herd immunity through vaccination.’

Two phases of successful clinical trials have established the Oxford vaccine is safe and triggers a strong immune response.

Phase three trials are now at an advanced stage.

The Jenner Institute is running trials at nine sites in Britain involving 10,000 volunteers, with others in Brazil and South Africa. Further trials are being run by its partners in India and the US.

The next critical stage in the process will be the ‘unblinding’ of trial results, which will see data from participants given the jab compared with the placebo group.

Until then, neither the participants nor the researchers leading trials themselves will know who has received the vaccine or the placebo – a process known as ‘double blinding’. Professor Hill suggested that the unblinding is now imminent – but different countries’ health regulators have different requirements before they license vaccines.

Researchers plan to seek emergency approval for vulnerable patients on the basis of interim results while conducting more trials to provide stronger evidence. ‘The initial licence would be for emergency use, not full approval,’ Professor Hill said.

‘They will want to see more data on safety and maybe efficacy before they give a licence to vaccinate everybody. In this country, our priorities are pretty clear… we’re going to vaccinate high-risk individuals before we vaccinate the young, the fit and healthy who are at lower risk. I think most countries will do that.

‘So what we’re looking for this year is an ’emergency use’ authorisation that will allow us to go and vaccinate those most at risk as a priority, then early next year everybody else.’ Medics and other key workers would also be able to receive the vaccine under an interim licence, he added.

The professor said Britain’s Medicines and Healthcare products Regulatory Agency has already been ‘fantastic’, adding: ‘That’s why we say this is one of the best countries in the world to do clinical trials – we have a well-informed, sensible regulator that makes decisions on the basis of a risk-based analysis, rather than a set of dogmatic rules.’

He said he would ‘be very surprised if they don’t move very fast’ when interim results are submitted. Professor Hill suggested data based on as few as 20 cases of Covid could produce statistically significant evidence that the vaccine is effective – but this may not be enough to get the jab cleared in some countries.

The US Food and Drug Administration, for example, insists on 150 infected participants before it accepts trial findings.

In addition, American trials are yet to restart after they were paused last month when a patient developed a neurological condition for reasons unrelated to the vaccine. Trials in Britain were also stopped as a result – but resumed swiftly.

Speaking online to members and alumni of Oxford’s Magdalen College, Professor Hill said: ‘Much of the reason why drug trials normally take so long is that academics had to spend months writing reports and seeking funding between their stages. In this case, money has been no object.’

He suggested the Oxford vaccine – administered with two jabs four weeks apart – was likely to provide strong protection from Covid-19 because it leads to both antibodies and T-cell immunity. The latter means the body’s white blood cells are primed to destroy any tissue that does get infected.