TEL AVIV (JTA) — On a recent Monday, the owner of a restaurant here captivated a group of 14 lunch patrons with stories of her life before and after moving to Israel from Ethiopia as a youngster. A family visiting from New York approached from another table, and the adult son asked if he could pose for pictures with some of the members of the big group.

After the group had left to walk to the shore nearby, the restaurant’s owner learned that she had just hosted a group of professional athletes and their entourage. She briefly considered running after them for a photo herself.

The athletes — Nelson Cruz, Cesar Hernandez and Jeimer Candelario, all Major League Baseball players in the United States — were surprised by what they learned at lunch, too. For instance, they had not known of the existence of Black Jews, including the thousands of Ethiopians living in Israel.

The players and their significant others were brought to Israel for a week by the Philos Project, a U.S.-based nonprofit organization that promotes Christian relations with Israel and other Middle Eastern countries. It was the organization’s first delegation to Israel involving Hispanic athletes, said Jesse Rojo, the Philos Project’s director of Hispanic affairs. The group toured Christian sites in Jerusalem and the Galilee and ran a baseball clinic for Jewish and non-Jewish youth in Raanana.

The visit also aimed to “proactively” combat antisemitism, Rojo said, “to show our baseball players that they can make a difference, not wait for someone to come out with an antisemitic tweet to do something.” The trip was organized well in advance of the recent antisemitism controversies involving American celebrities such as rapper Kanye West and NBA star Kyrie Irving.

But the players also expressed eagerness to learn about Israel and to impart their experiences upon returning to their homelands of the Dominican Republic and Venezuela — and to MLB clubhouses.

Cruz, from the Dominican Republic, is 39th on the MLB’s all-time home run list with 459. He hit only 10 homers this year and is 42 years old, but he said he’s hopeful a team will sign him to a contract for 2023. Hernandez, a second baseman who is also now a free agent, hails from Venezuela and is a former Gold Glove winner, earned for being named the best defender at his position in the American League. Candelario, born in New York but raised in the Dominican Republic, is also looking for a new team after playing six seasons at third base for the Detroit Tigers. Cruz and Hernandez played together on the Washington Nationals this past season.

On a minibus, before it set out for a day of touring, Cruz led a prayer of gratitude as everyone along for the ride bowed their heads. Members of the group uttered “amen” responses throughout. In Jaffa, Candelario expressed excitement at learning that the Bible’s Jonah had departed by ship from the ancient city’s port before being swallowed by a huge fish. At lunch, Candelario led the table in grace.

In separate interviews, each of the three visiting players said he had never heard anti-Jewish or anti-Israel views expressed by relatives, friends or acquaintances. Most of their compatriots, they said, think that Israel is constantly under enemy attack, a view they added was dispelled by their experience traveling around the country and feeling safe.

All attributed pro-Israel inclinations to their strong Christian beliefs, including regularly attending church services. They cited their mothers as devout women who raised them with Bible stories.

“We love God and the word of God. This is the land of our fathers,” said Candelario. “Whoever blesses Israel will be blessed,” he said, paraphrasing God’s promise to Abraham.

Rojo is organizing a charity softball game in the Dominican Republic between Dominican and Jewish-American MLB players in the coastal town of Susua — which was founded by refugees of Nazism who established still-operating dairy and sliced-meat factories. Funds raised through the event will pay to renovate both a baseball field and the town’s synagogue and to commemorate the Jewish immigrants’ roles in Susua’s history, Rojo said.

Cruz is trying to recruit fellow Dominican players to come on subsequent Israel trips and to play in next year’s Susua event. Superstar outfielder Juan Soto, Cruz’s former teammate on the Washington Nationals, considered participating in the recent delegation, but he reversed course after being traded mid-season to San Diego, Cruz said. Cruz also hopes to persuade the retired legends Albert Pujols and Manny Ramirez to come to Israel, too.

Back home, “we’ll share this experience, and definitely more players will be motivated to come,” Cruz said.

“Anyone who’s an opinion-maker from such countries helps us,” said Jonathan Peled, the Israeli foreign ministry’s deputy director general for Latin America. “They become ambassadors of good [will]. Whether a pastor, an athlete, a performer, a YouTuber – on every visit to Israel, there’s nothing like firsthand observation to see Israel in a more balanced, positive manner and less distorted.” 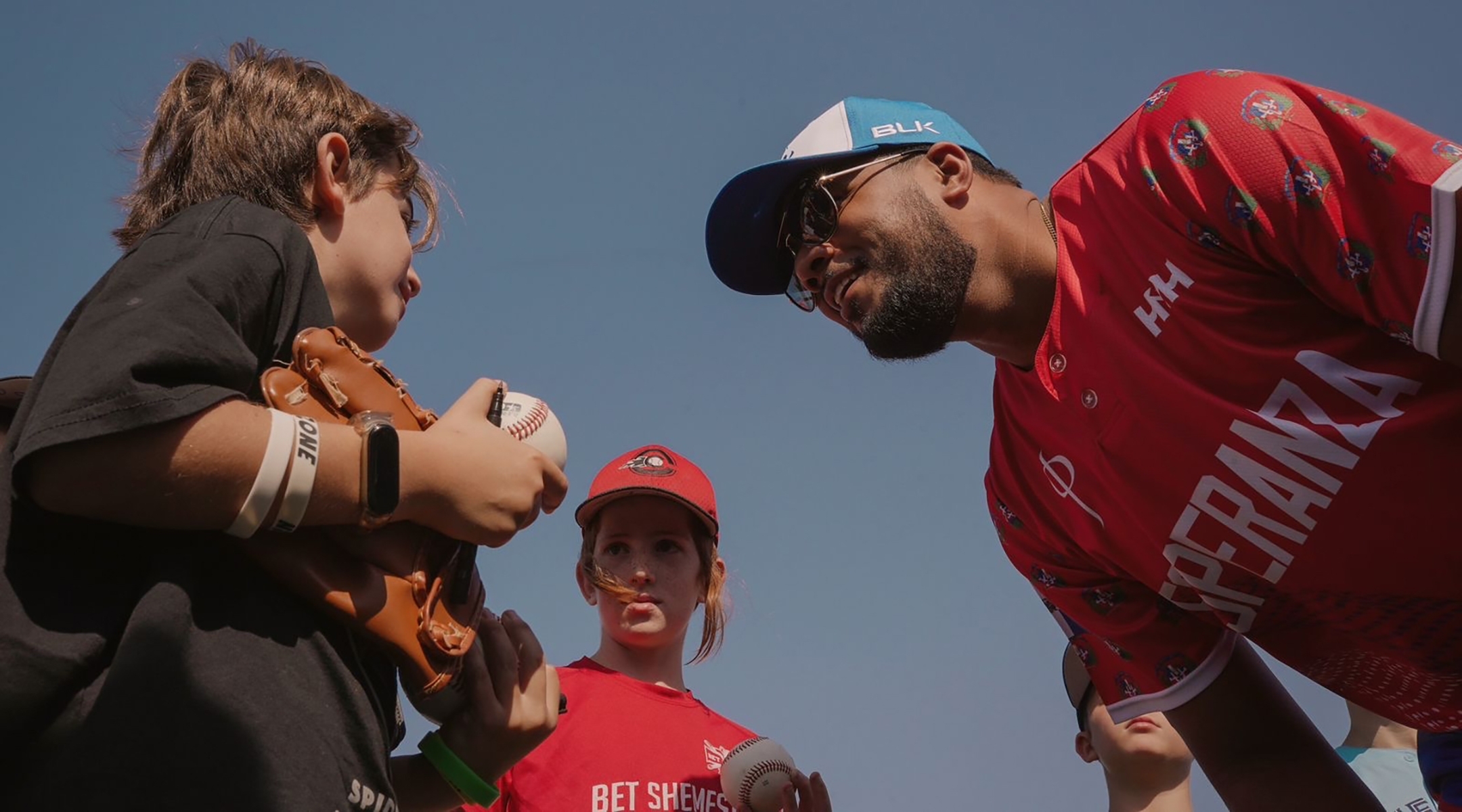 Jeimer Candelario, a third baseman for the Detroit Tigers, interacts with children at the Raanana field. (Nico Andre’ Duran) Image by

Israel enjoys good relations throughout Latin America, with Venezuela an exception after it broke off diplomatic relations with the Jewish state in 2009, Peled said. “But we hope that [ties] will be renewed soon,” he said.

Venezuela, the Dominican Republic and Israel, coincidentally, will be competing (along with Puerto Rico and Nicaragua) in the same group at the upcoming World Baseball Classic, to be held in Miami in March. The teams will feature large contingents of major leaguers, with Israel’s roster consisting mainly of American Jews.

Baseball is not a top sport in Israel, but Team Israel’s periodic success on the world stage has helped promote the game. The Raanana site — dedicated in memory of Massachusetts native Ezra Schwartz, who was killed in a 2019 terrorist attack in Israel — is one of only a handful of baseball fields in the country. Other notable ones are at Kibbutz Gezer, in Tel Aviv’s Yarkon Park, and at the Baptist Village complex in Petach Tikvah.

At the group lunch, Hernandez said that he “would live here” in Israel in the off-season if he could obtain a visa. He was asked whether he meant it.

“Yeah, because it’s the Jesus country,” Hernandez said. “I asked my wife, and she said yes.”

Sitting beside him at the restaurant, Gabriela Hernandez nodded.

“Yes,” she said, “because of the significance it has for us.”

The post Nelson Cruz and other Hispanic MLB players visit Israel to promote Christian-Jewish relations appeared first on The Forward.