The US Army Corps of Engineers flushes the water jets of a dredge’s suction head.

But the drought didn’t end when the channel reopened.

Barges have only been able to transport goods down the historically shallow Mississippi because the US Army Corps of Engineers has been constantly vacuuming the bottom of the river.

“There was a few months of pretty intense management,” Lou Dell’Orco, chief of operations and readiness at the USACE St. Louis district, told Insider.

USACE maintains a nine-foot-deep channel down the Mississippi River, so that ships and barges can travel freely. 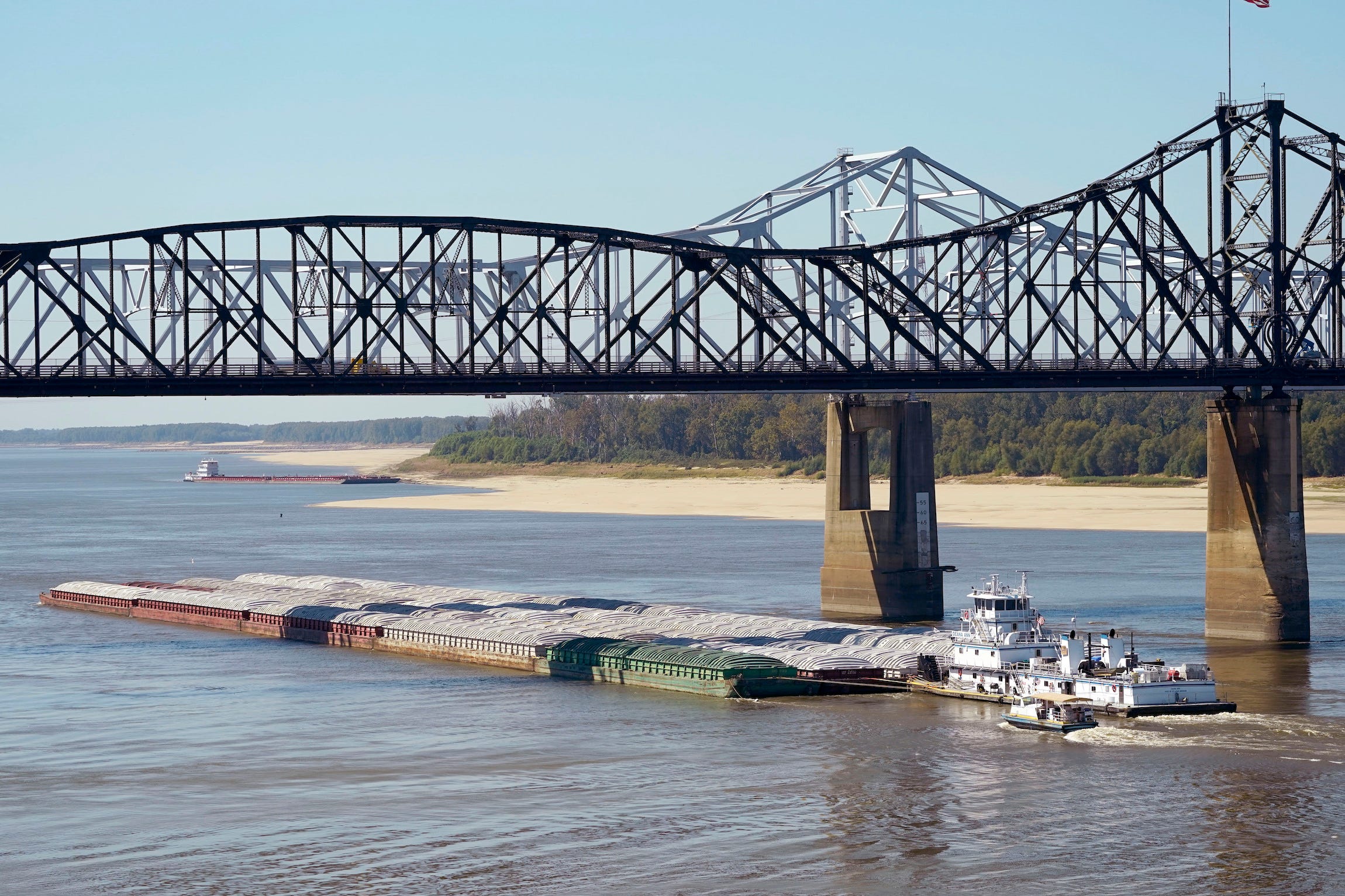 A barge tows cargo down the Mississippi River, in Vicksburg, Mississippi during a historic drought.

To keep that channel open, Dell’Orco had to bring in extra dredges from other districts.

At some points, three vessels were operating 24/7, traveling to chokepoints in the St. Louis area, dropping their suction tubes to the bottom of the river, inhaling material from the riverbed, and transporting it through tubes to designated disposal sites — like “a giant vacuum cleaner,” in Dell’Orco’s words.

“Our dredge can fill up an Olympic-sized pool about every hour,” he said.

It’s normal for USACE to keep one dredge at work 24/7 throughout the season, but not two or three, Dell’Orco said. 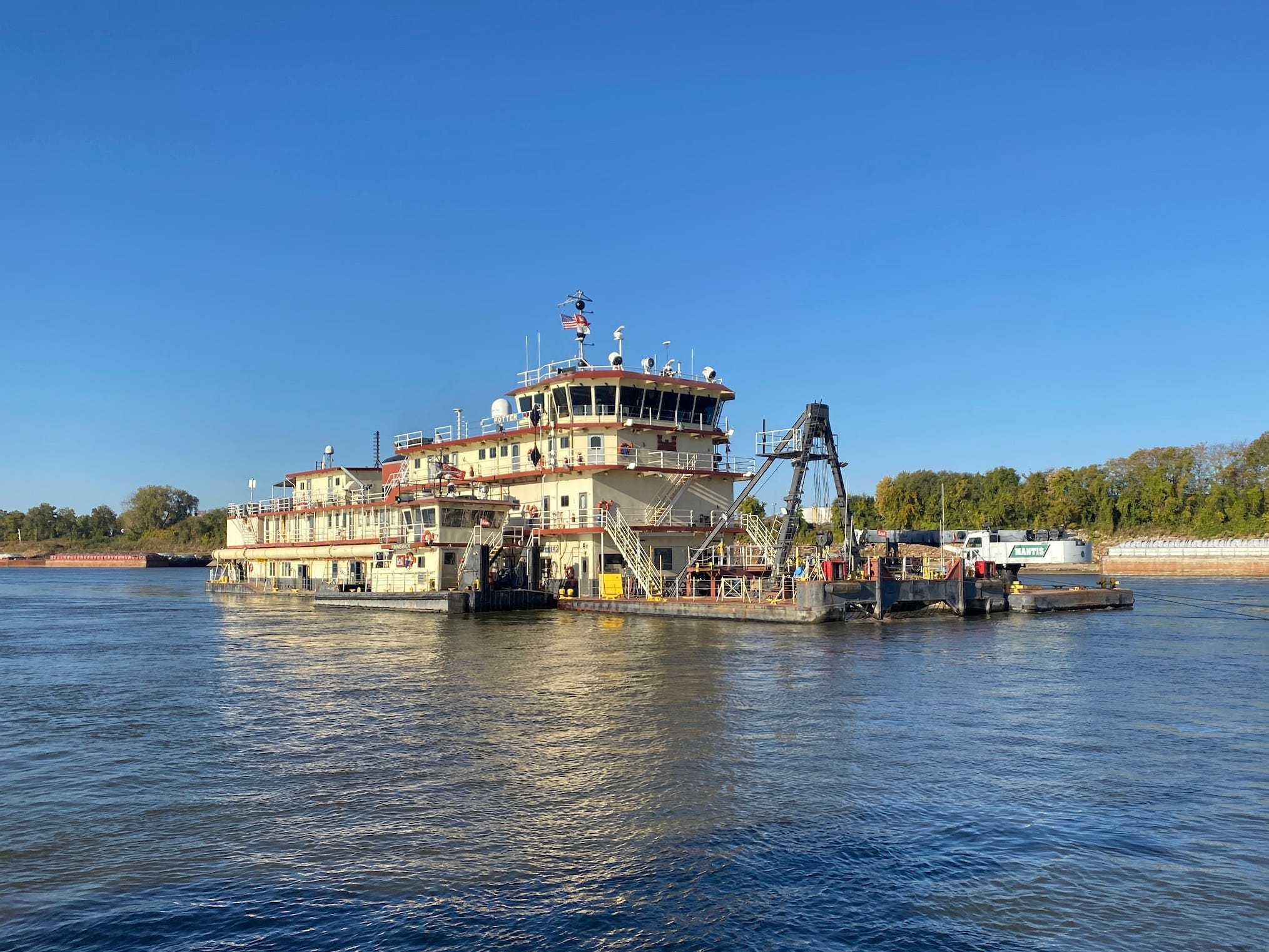 The Dredge Potter, owned and operated by the St. Louis District US Army Corps of Engineers.

A four-day break during a cold snap around Christmas gave crews time to do minor maintenance on the vessels. One of the dredges left the district around that time, and the second one left St. Louis last week, Dell’Orco said.

More rain and snow have improved conditions on the river, and it looks like the end of the crisis is on the horizon.

“Commerce is moving with no restrictions relative to drought,” Deb Calhoun, senior vice president at the Waterways Council, a group that advocates for modern waterway infrastructure, told Insider in an email. “We will be watching for high water next, which is something that normally happens around this time of year.”

Dell’Orco expects his teams can stop dredging by the end of January.

Drought damage control by the numbers: 3 dredges sucking up the river bottom 24/7 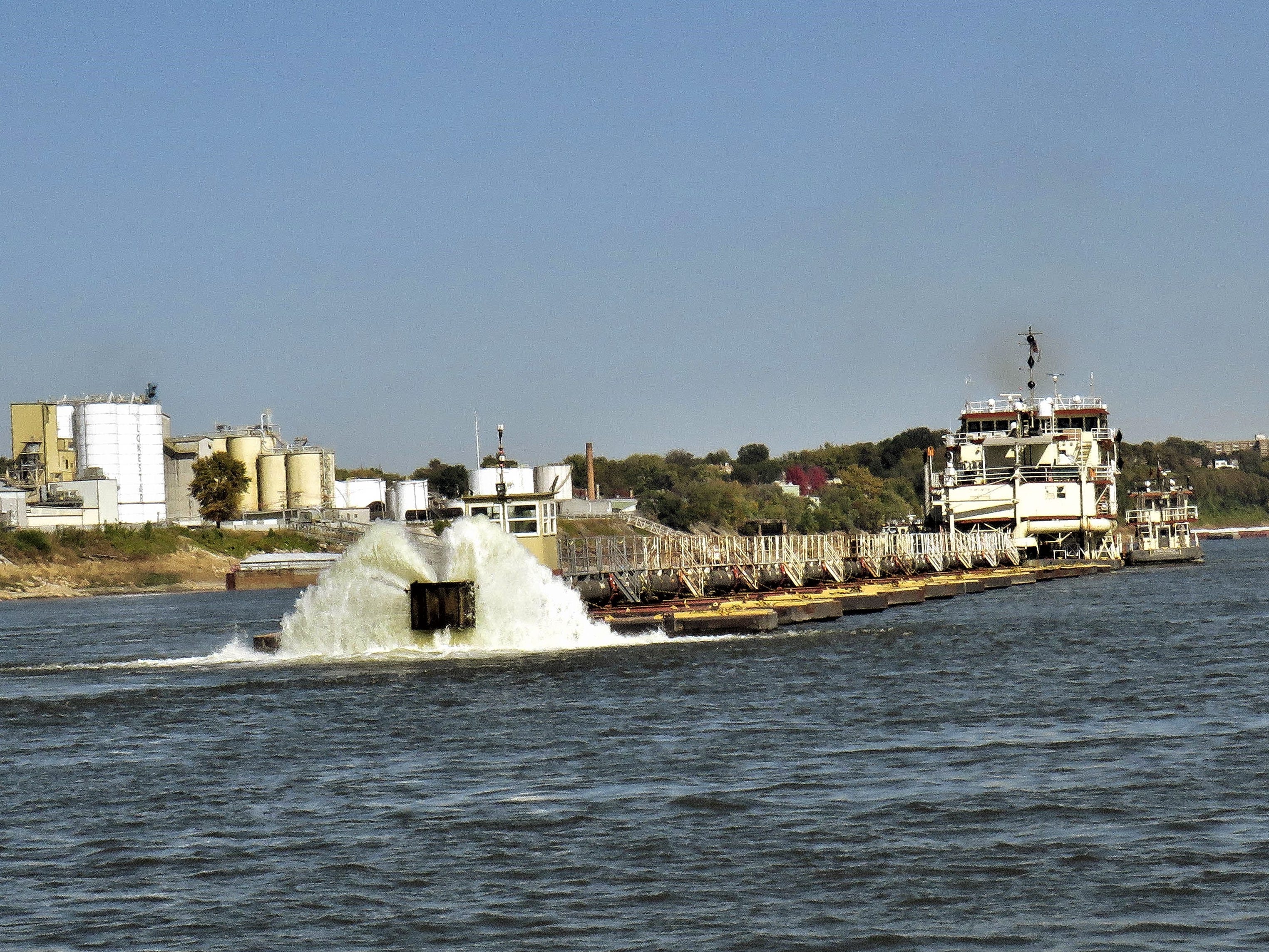 The Dredge Potter submerges its suction head and shoots water jets to stir up the sand and gravel on the bottom of the river, which is then vacuumed up and moved through 800 feet of pipe to be discharged somewhere outside the channel.

Since July, the St. Louis district has dredged about 9 million cubic yards of material from the bottom of the river in about 70 locations, Dell’Orco said. In a normal year, they would only dredge 3 million to 4 million cubic yards.

This year the dredging season has also stretched at least 100 days longer than normal, Dell’Orco added.

He estimates that it costs about $6.5 million to operate two dredges for a month. Throw in a third dredge, and he said USACE is looking at $10 million per month.

Climate change could make droughts like this year’s more common 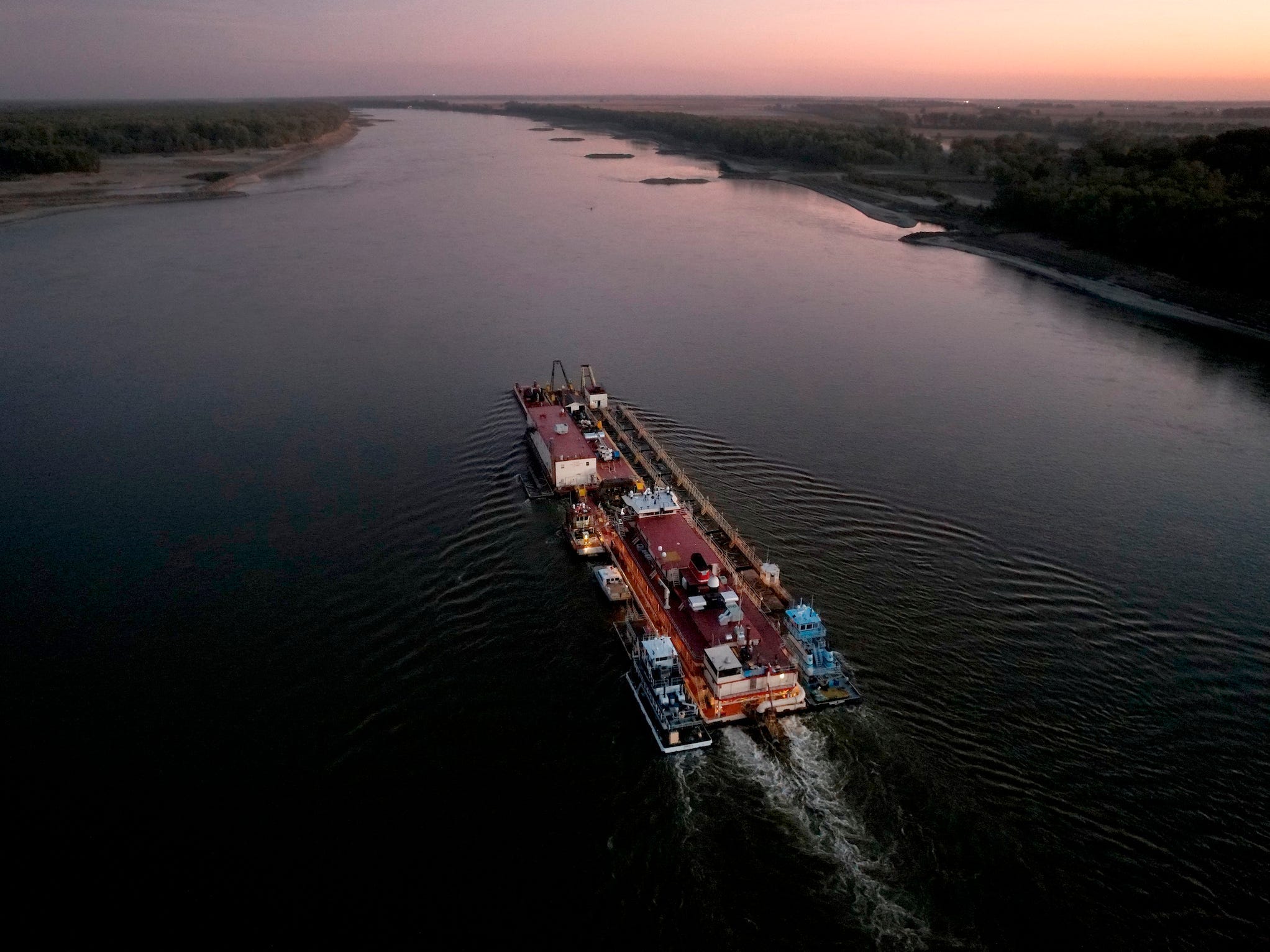 A US Army Corps of Engineers dredging vessel powers south down the Mississippi River at the height of the drought.

The last time the Mississippi dropped to such extreme lows and required this much management was in 2012.

No research has directly linked these particular drought events to climate change. But scientists are confident that rising temperatures will amplify droughts across much of the US.

In this case, a summer of record heat waves baked away some of the river’s water, and then a flash drought struck the Ohio and Missouri river valleys, robbing the Mississippi of the snowpack that usually feeds it.

Instead of every 10 to 15 years, for example, drought could strike the river every five to 10 years.

Much of the Mississippi River basin is still classified in a drought, including the lower regions that help farmers transport grain for export, according to the US Drought Monitor.

That could end in the next few weeks, though. Forecasts from the National Weather Service’s Climate Prediction Center offer hope that drought will alleviate across much of the Mississippi River basin in February. 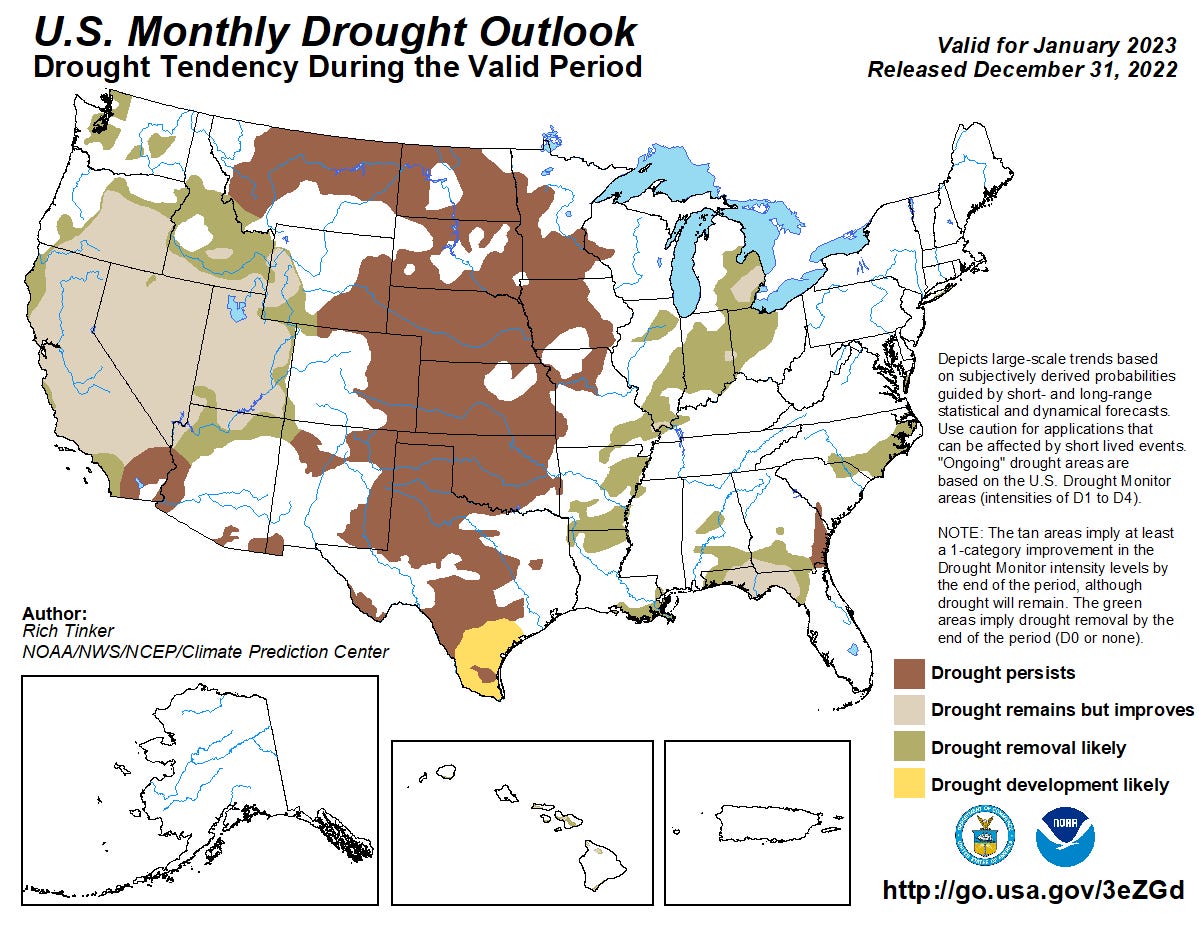 The National Weather Service predicts the likely removal of drought in much of the Mississippi River basin in February.

Above-average precipitation across the northern Midwest could help replenish the river throughout the month. That’s when Calhoun and Dell’Orco will be on the lookout for flooding. 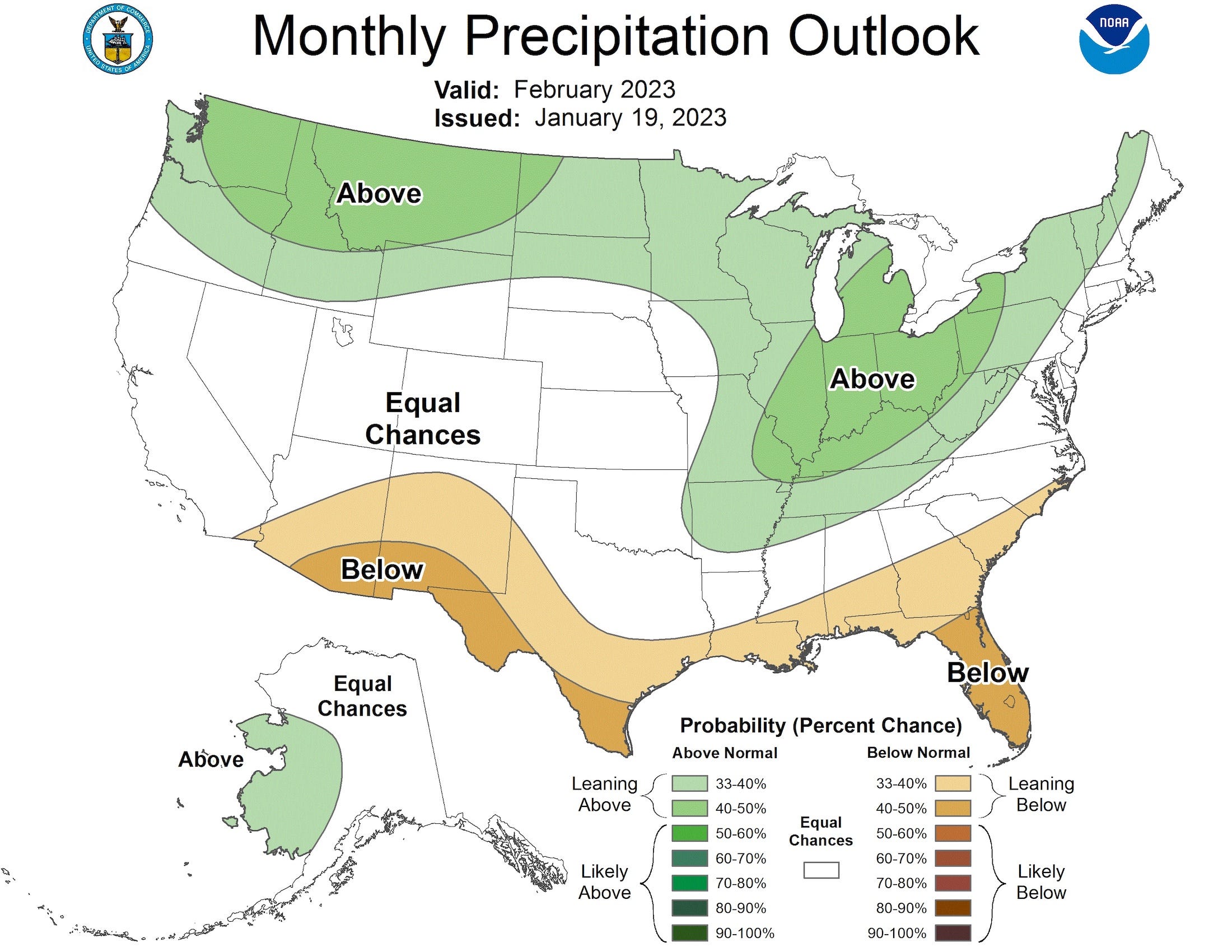 A rough forecast of precipitation across the US for the month of February 2023.

After that, forecasts show there could be no drought conditions across the Mississippi River basin for the first time in months. 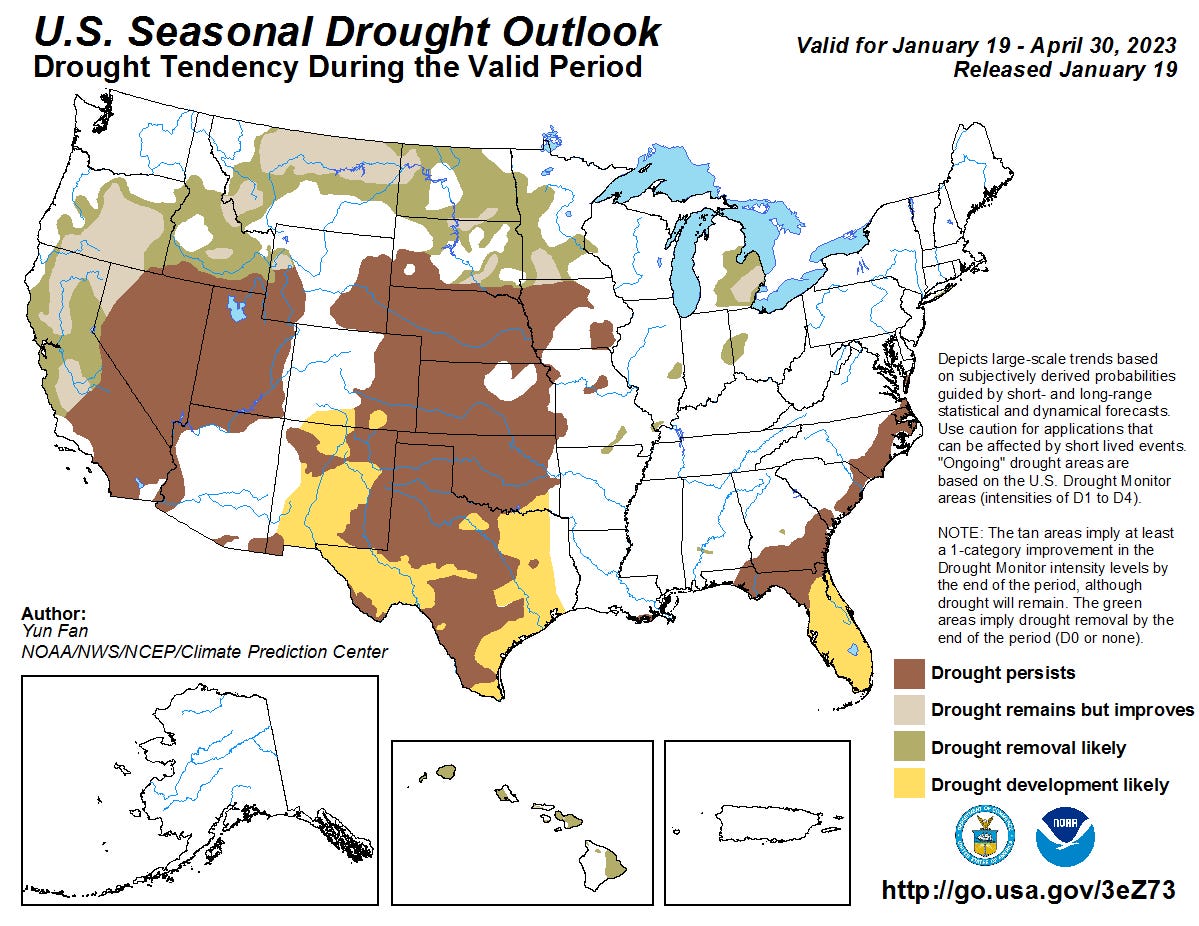 The National Weather Service’s outlook forecasts a likelihood of no drought in most of the Mississippi River basin into spring.

That would give Dell’Orco’s team time to do maintenance on their vessel before the dredging season begins again in July.

“It’s really a shorter maintenance season. You’ve got March through the middle of June to to get it ready to go,” Dell’Orco said.