KUALA LUMPUR, Malaysia — Malaysia’s king met with lawmakers Wednesday and will next consult other royal families in a continuing search for a prime minister after inconclusive general elections that saw the rise of Islamists sparked anxieties in the multiracial nation.

The biggest winner was the Pan-Malaysian Islamic Party, the hard-line ally in Muhyiddin’s bloc, with 49 seats—more than double what it won in 2018. Known as PAS, it backs Islamic Shariah law, rules three states and is now the single largest party.

As the contest for the top job drags on, police have tightened security as posts on social media warned of racial troubles if Anwar’s multiethnic bloc wins. Malay Muslims form two-thirds of Malaysia’s 33 million people, who include large ethnic Chinese and Indian minorities.

A group of civil society and rights organizations said they detected a coordinated attempt on social media to promote Muhyiddin’s bloc and demonize Anwar and one of its Chinese-dominated allies, the Democratic Action Party, or DAP. Islamic stalwarts have often used DAP as a bogeyman to warn Malays of Chinese political dominance if Anwar’s bloc wins.

Read More: Malaysia’s Anwar Ibrahim: We Must Move on From ‘Tortures of the Past’

The group said in a statement that the posts blamed DAP for causing violence in 1969 that left hundreds dead, mostly Chinese. An affirmative action program that gives privileges to Malays in jobs, housing and education was introduced after the 1969 unrest to give them more opportunities to narrow the wealth gap with the business-minded Chinese.

“The posts then evolved into videos containing images of weapons and guns, with messages warning the Malay majority to beware of DAP and Pakatan Harapan. They also threatened a return of racial unrest,” the group said. Short video app TikTok reportedly said it has zero tolerance against any form of hate speech and violent extremism and will remove content that violates its community guidelines. 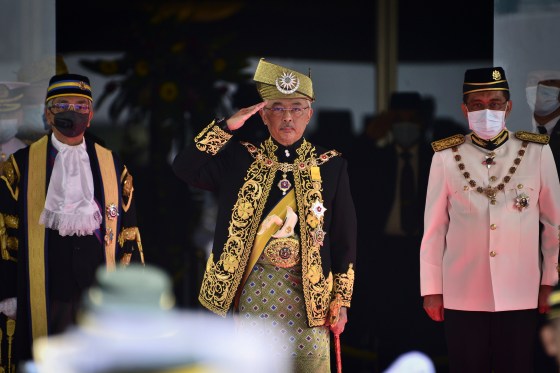 King Sultan Abdullah Sultan Ahmad Shah proposed a unity government after meeting the two leaders Tuesday but Muhyiddin rejected the idea. The monarch Wednesday met leaders from the third largest bloc, the alliance led by the United Malays National Organization, as well as another influential bloc from Borneo island.

UMNO President Ahmad Zahid Hamidi told the Malaysiakini online news portal that the king requested his National Front to be part of a unity government during the meeting. He said the alliance’s decision-making body and its 30 lawmakers who won in the polls will hold more talks Wednesday evening. The National Front had earlier said it will support neither leader and remain in opposition.

The palace in a statement said Sultan Abdullah will meet Thursday with royal families from nine states to consult them on the deadlock. Malaysia’s hereditary state rulers, who take turns as the country’s king every five years under a unique rotation system, are highly regarded by the country’s Malay majority as the guardians of Islam and Malay tradition.

“Our country’s future is valuable and we have to plan it carefully,” the king said in the statement as he appealed for calm.

Anwar’s reformist alliance won 2018 elections that led to the first regime change since Malaysia’s independence from Britain in 1957. But the government collapsed after Muhyiddin defected and joined hands with UMNO to form a new government. Muhyiddin’s government was beset by internal rivalries and he resigned after 17 months. UMNO leader Ismail Sabri Yaakob was then picked by the king as the prime minister.

Many rural Malays fear they may lose their rights with greater pluralism under Anwar. Fed up with corruption and infighting in UMNO, many opted for Muhyiddin’s bloc in Saturday’s vote.