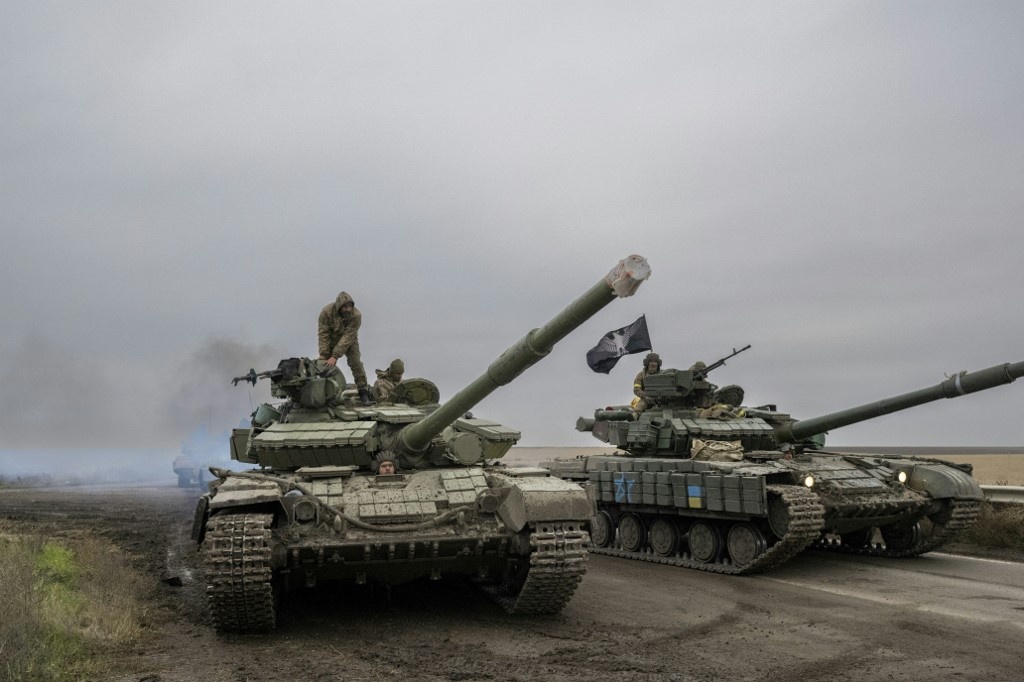 Ukraine said Friday that almost half of its power infrastructure was in need of repair after weeks of Russian attacks that have disrupted electricity supplies to millions as temperatures plunge.

Russia meanwhile accused Kyiv’s forces of executing a group of its soldiers who were surrendering to Ukraine in what Moscow described as a “massacre” that amounted to a war crime.

The assessment by Prime Minister Denys Shmyhal of the widespread damage to Ukraine’s grid comes after weeks of sustained Russian attacks on Ukraine’s energy infrastructure.

“On Nov.15 alone, Russia fired about 100 missiles at Ukrainian cities. Nearly half of our energy system has been disabled,” Shmyhal said, appealing to European allies for support.

Ukrainian President Volodymyr Zelensky told the nation on Thursday that some 10 million people were suffering blackouts as a result.

But the Russian defense ministry said Friday it was only targeting military-linked facilities, and said a series of long-range and precision strikes the day before had “hit exactly the designated objects”.

And the Kremlin this week blamed the blackouts and their civilian impact on Kyiv’s refusal to negotiate with Moscow, not on Russian missile attacks.

Ukraine’s description of the damage to its power industry came after Russia said Friday it was strengthening positions in Crimea, which Kyiv’s forces are battling towards.

Moscow used the peninsula, which hosts several important Russian military bases, as a launching pad for its February.

“Fortification work is being carried out… with the aim of guaranteeing the security of all Crimeans,” the Moscow-aligned governor of territory, Sergei Aksyonov, said.

His announcement comes as Ukraine forces are pushing a counter-offensive in the south towards Crimea and last week reclaimed Kherson, the capital of the region that borders Crimea.

With electrical and water supplies cut to the city following the destruction of key utilities by the retreating Russians, residents have been moving to stockpile basic supplies.

The presidency said it was doing everything possible to improve conditions there and that neighbouring territories — also battered by Russian forces — would provide help.

“Our people there need a lot of help. Russians not only killed, mined but also robbed towns and cities. There is nothing left there in fact,” the deputy head of the presidency Kyrylo Tymoshenko said.

Kherson regional deputy governor Sergiy Khlan meanwhile announced Friday that the city’s rail link was being restored with a first train leaving later in the day.

Russia claimed to have also annexed the Kherson region along with three more in September, vowing to defend them with all available military means.

Ukraine President Volodymyr Zelensky has said his forces intend to recapture the peninsula as well.

There have been several explosions at or near Russian military installations in Crimea since February, including a coordinated drone attack on a key Russian naval port at Sevastopol.

In October, the Kerch bridge connecting the peninsula to the Russian mainland was partially destroyed in an attack attributed to Ukraine by Moscow.

Russia announced on Friday that it was making gains too in the eastern Donetsk region, which its forces have partially controlled since 2014.

Moscow’s forces, alongside troops from two breakaway regions in east Ukraine and mercenaries from Russia’s Wagner group have been trying for months to capture the nearby town of Bakhmut.

Nearly nine months of brutal fighting between Ukraine and Russia has spurred credible allegations of war crimes from both sides.

The last accusations came Friday when Russia accused Ukrainian troops of executing some ten prisoners of war in what Moscow said was a “massacre”.

“No one will be able to paint the deliberate and methodical murder of more than ten restrained Russian soldiers… who were shot in the head, as a ‘tragic exception,’” the ministry said in a statement.

The statement refers to videos circulating on Russian-language social media that purport to show the bodies of Russian servicemen who had surrendered and were then killed.

The Ukrainian prosecutor general’s office said Friday that the death toll from strikes earlier in the week on Vilniansk in the Zaporizhzhia region, which Moscow also said annexed, had left 10 people dead, including two children.