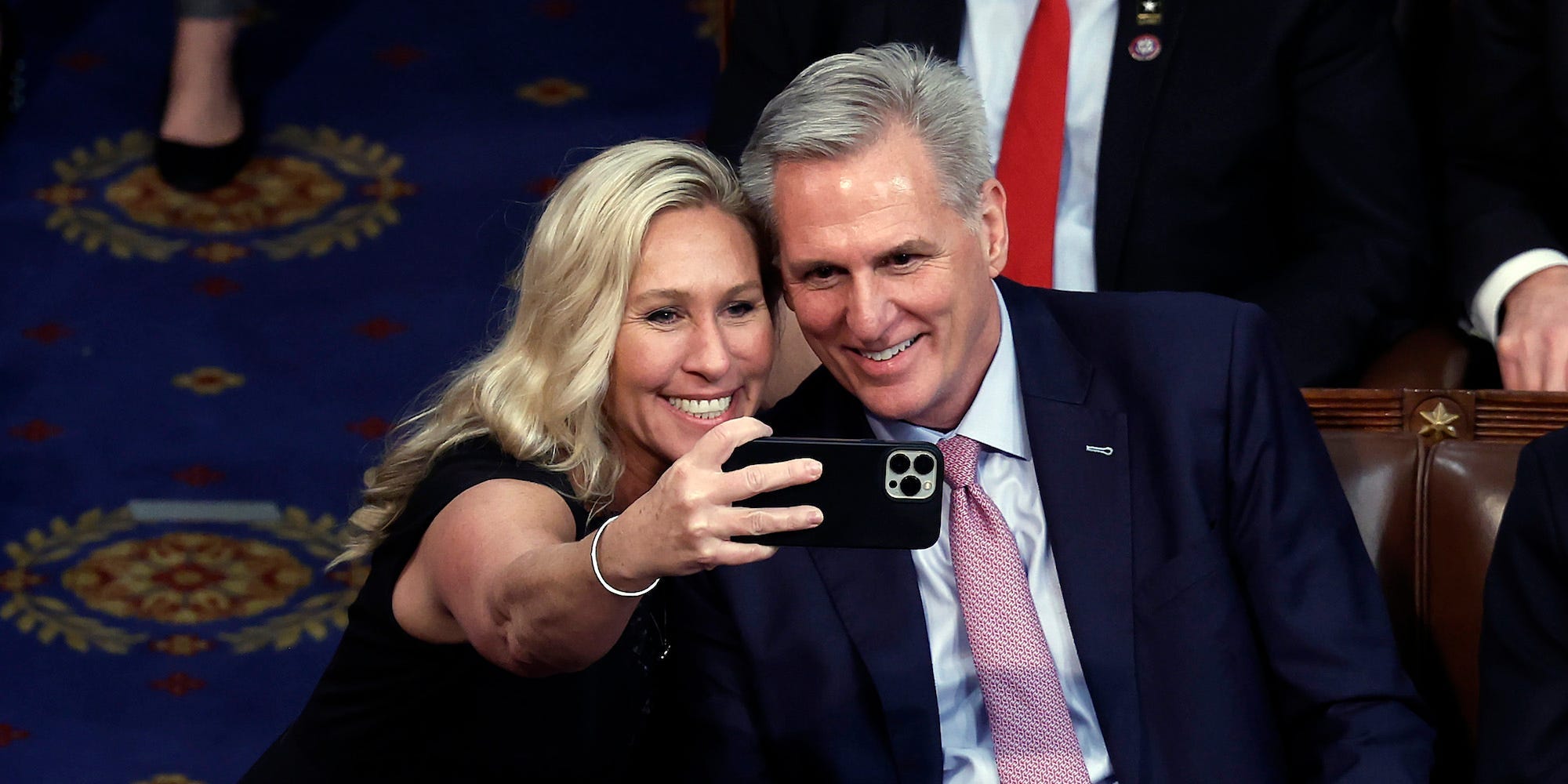 Republican Rep. Marjorie Taylor Greene of Georgia takes a selfie with Kevin McCarthy after his election as speaker of the House.

These days, House Speaker Kevin McCarthy has only positive things to say about far-right Republican Rep. Marjorie Taylor Greene — once a thorn in his side and a source of frequent headaches for the House Republican leader.

“If you’re going to be in a fight, you want Marjorie in your foxhole,” McCarthy said in an interview with the New York Times published on Monday. “When she picks a fight, she’s going to fight until the fight’s over. She reminds me of my friends from high school, that we’re going to stick together all the way through.”

Greene, for her part, is also clearly smitten with McCarthy.

Ahead of a series of 15 votes for speaker of the House that dragged on for four days, she remained fiercely loyal to the Republican leader and often criticized colleagues — many of them fellow members of the House Freedom Caucus — that were opposed McCarthy’s bid.

As recently as last week, she publicly chided fellow Republican Rep. Matt Gaetz of Florida — who was in the midst of praising Greene — for putting House Republicans “weeks behind” in rolling out their agenda by helping to lead the charge against McCarthy.

At the start of the previous Congress, the Georgia congresswoman’s committee assignments were revoked in a bipartisan House vote after a history of violent rhetoric came to light. According to the Times, she once thought McCarthy had played a role in allowing that to happen.

But with Republicans now holding a narrow majority, McCarthy has made good on his pledge to give Greene even better committee assignments than she once had: she’s been given a seat on both the Committee on Oversight and Accountability and the Committee on Homeland Security.

And Greene, a former activist who has a history of promoting unproven or debunked narratives about the pandemic and vaccines, reportedly may also get a seat on an Oversight subcommittee investigating the origins of COVID-19.

But it wasn’t always this way for McCarthy and Greene.

Once upon a time, McCarthy was compelled to condemn the far-right congresswoman’s rhetoric, including after her attendance of a white nationalist event in February 2022.

And Greene used to be a critic of McCarthy, telling Insider in November 2021 that he “definitely doesn’t have the support he needs right now in the conference” after he declined to punish a group of House Republicans that helped Democrats pass the bipartisan infrastructure bill.