(JTA) — Four and a half feet of snow had just fallen on East Aurora, New York, but Kim Kaiser and her fellow volunteers through Jewish Family Services of Western New York weren’t willing to compromise on their Thanksgiving plans.

Those plans involved joining a community Thanksgiving feast on Tuesday night, two days before the holiday, at the Ukrainian American Civic Center in nearby Buffalo, along with the Ukrainian family of six that the volunteers had been supporting since their arrival to the United States at the end of the summer.

The event, which was sponsored by the Buffalo branch of the Ukrainian Congress Committee of America, was open to all new Ukrainian arrivals, their sponsors and their supporters. A buffet of traditional Thanksgiving foods was on offer, along with musical accompaniment by a Ukrainian singer and pianist.

For Kaiser, the evening was a can’t-miss milestone in her journey supporting recent immigrants who have come to the United States under duress. Last year, she began volunteering through Jewish Family Services to set up housing for Afghan, Congolese and Burmese refugees new to Buffalo, which has a very large refugee population.

“And then I heard of a family in our town that was going to be sponsoring a family from Ukraine,” Kaiser told the Jewish Telegraphic Agency. “My husband and I knew that we needed, that we wanted to do this.”

In joining the efforts to support refugees, Kaiser participated in an age-old Jewish tradition. The importance of welcoming strangers is so deeply rooted in Jewish tradition and experience that immigration issues have long enjoyed a bipartisan consensus in American Jewish communities even amid deep polarization on other topics. Many cities have social services agencies that began to support Jewish immigrants and now work with new arrivals of all backgrounds, often conscripting Jewish volunteers as the backbone of their work.

Over the last year, those networks have kicked into high gear as not just one but two significant waves of people unable to remain safely in their homes made their way to American shores: first Afghans last year after the U.S. military withdrawal from their country and then Ukrainians this year amid the war instigated by Russia there.

Now, as millions of Americans prepare for their Thanksgiving meals, Jewish volunteers are introducing Ukrainian and Afghan evacuees to Thanksgiving for the first time. Some are even setting aside their own reservations about the holiday to do so. (Thanksgiving’s cheery origin myth is seen by many as whitewashing the genocide of Native Americans that followed the arrival of Europeans in North America.)

In California, Gail Dratch and her husband Elliot have been volunteering through the Orange County Jewish Coalition for Refugees. They will celebrate the holiday on Thursday by inviting a family from Afghanistan into their home, where they’ll serve a halal turkey — in keeping with their Muslim guests’ religious requirements.

“For us, Thanksgiving has become just such a part of what we do,” Dratch told JTA. “And I know my family at least, we don’t think about the beginnings of Thanksgiving, which are really troubling. My daughters especially are very troubled by the original story. But clearly, this family is so thankful for having this opportunity to be in the United States.”

Both Kaiser and Dratch got support for their volunteer circles from their local Jewish federations, in Buffalo and Orange County. They were two of 15 local federations to get support from Jewish Federations of North America, an umbrella group, to resettle nearly 2,000 Afghans through refugee welcome circles, according to Darcy Hirch, a spokesperson. 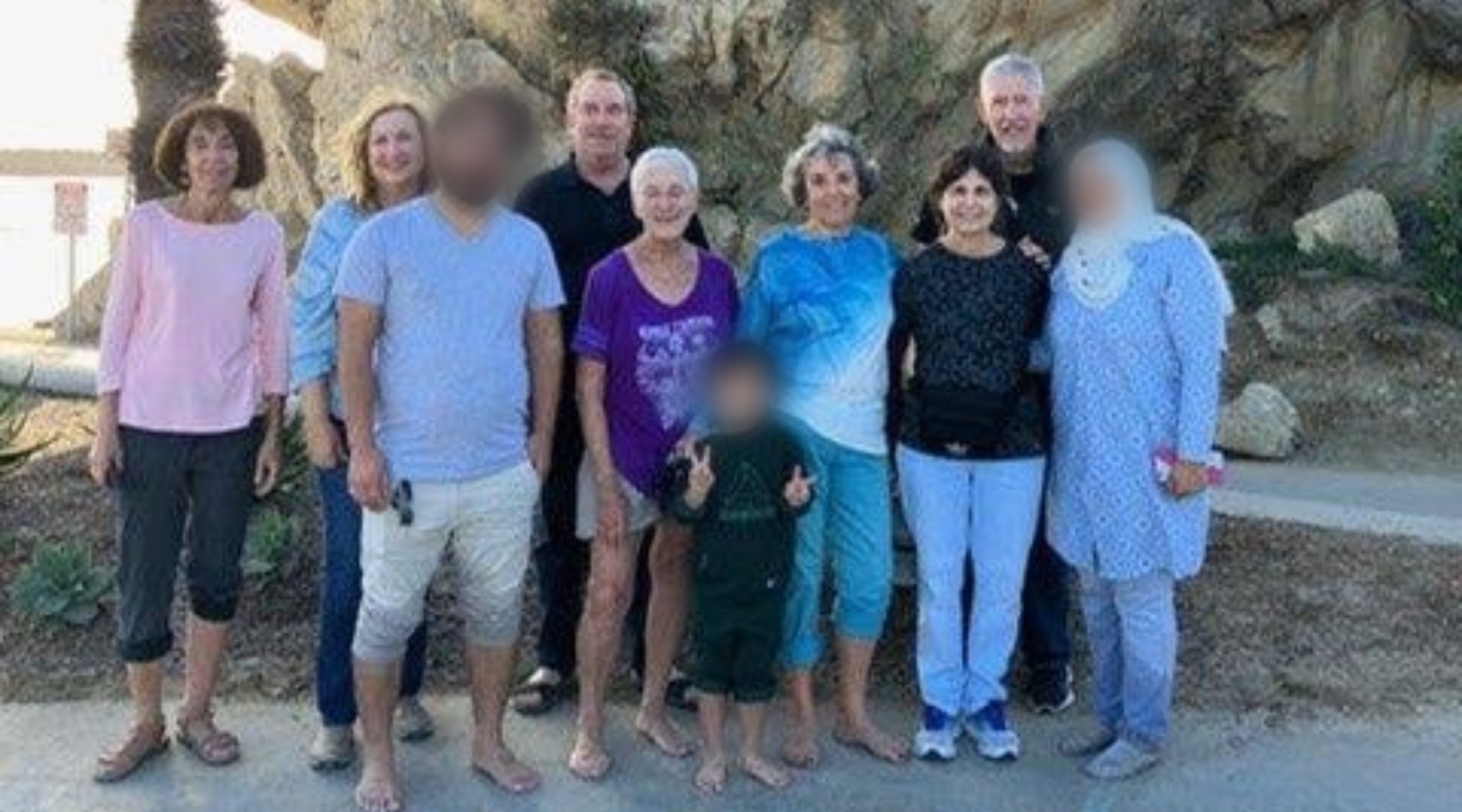 Gail and Elliot Dratch stand with their partners from the volunteer circle and their evacuee family from Afghanistan, whose faces have been blurred for their safety. (Courtesy of Jewish Federations of North America.) Image by

The Dratches have done far more than cook a special dinner. The Afghan family they are working with arrived on a Special Immigrant Visa, so the father was able to obtain a driver’s license quickly and found work almost immediately. But the mother had to learn to drive from scratch.

“She cried the first time I took her to a big parking lot just to drive around Angel Stadium,” Dratch said, referring to the stadium in Anaheim where the Los Angeles Angels play. “And when she got behind the wheel, she cried because she said it’s been a dream of hers to drive but she never thought she’d be able to, living in Afghanistan.”

The couple’s son, who is in preschool, is learning English very quickly, Dratch said.

“They’re just charming, lovely people,” she said. “It was their dream to come to the United States and raise their son here because they knew he would have far more opportunities here than in Afghanistan. And so we are thankful that this family has come into our lives because they’ve been such a gift to us.”

Dratch’s experience working with displaced people began in 2016 when she went to Greece to work with Syrian refugees.

In Buffalo, Kaiser’s volunteer circle takes turns running errands and sharing the duties of a host family for the parents and with four children with whom they have been working since September. Though the family has only been in the United States for a few months, Kaiser said she has noticed a big difference in the children, who she says were initially downcast and shy but are now “smiles all around.”

At the meal on Tuesday, which was set up for 200 people, Kaiser says she saw evacuees mingling with each other, delighting in speaking Ukrainian without relying on Google translate to communicate with each other, and exchanging addresses and telephone numbers with where they can be reached in the Buffalo area. The kids went back to the buffet table multiple times for dessert.

Said Kaiser, “You can tell that every time you do something for them that they are thankful that there’s somebody there to help them and that they can start feeling, finally, a little bit at ease.”