He was taken away “by police officers at the border” without explanation, his spokesperson Kira Yarmysh tweeted. “The lawyer was not allowed to go with him, because just seconds ago ‘he passed the border.'”

Navalny and his wife Yulia were returning from a five-month stay in Germany, where he recovered from poisoning with military-grade nerve agent Novichok. They landed at Moscow’s Sheremetyevo airport just after 8 p.m. local time (12 p.m. ET), according to flight data information.

Standing in the airport after landing, Navalny told journalists, “This is the best day in the past five months.”

“Everyone is asking me if I’m scared. I am not afraid,” he added. “I feel completely fine walking towards the border control. I know that I will leave and go home because I’m right and all the criminal cases against me are fabricated.”

A perennial thorn in Russian President Vladimir Putin’s side, Navalny was placed on the country’s federal wanted list during his convalescence in Germany, in relation to a years-old fraud case that Navalany dismisses as politically motivated. 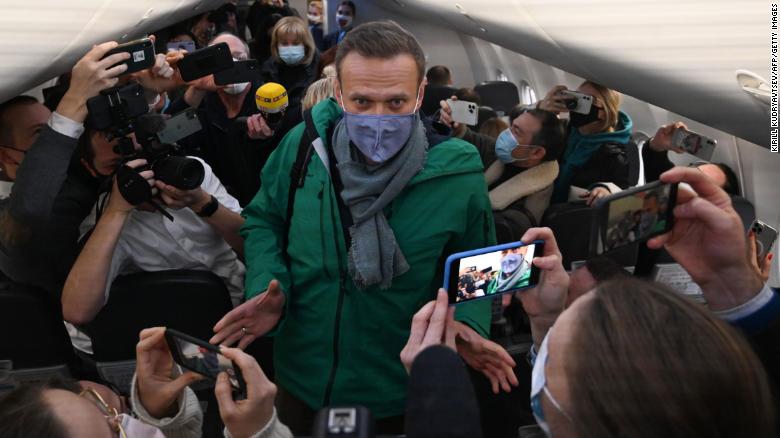 Passengers and journalists take photos of Alexey Navalny as he takes his seat on the flight Sunday.

Russian opposition leader Alexey Navalny, right, and his wife, Yulia Navalnya, on a Pobeda airlines plane heading to Moscow before take-off from Berlin on Sunday.

Last week, Russian’s prison authority (FSIN) warned it would “to take all action to detain” Navalny.

After Navalny’s poisoning in August, a

by CNN and the group Bellingcat implicated the Russian Security Service (FSB) in the poisoning, piecing together how an elite unit at the agency followed Navalny’s team throughout a trip to Siberia in August, where Navalny was poisoned and fell ill on a flight to Moscow.

The investigation also found that this unit, which included chemical weapons experts, had followed Navalny on more than 30 trips to and from Moscow since 2017. Russia denies involvement in Navalny’s poisoning. But several Western officials and Navalny himself have openly blamed Russia.

Navalny had originally been scheduled to land at Vnukovo airport, where a crowd of hundreds of supporters and journalists waited. CNN has been unable to establish why the flight was diverted.

Russian opposition leader Alexei Navalny is seen in a Pobeda plane after it landed at Moscow’s Sheremetyevo airport on January 17, 2021.

Their 2.5-hour flight by Russian carrier Pobeda took off from Berlin Brandenburg Airport on Sunday afternoon.

Russian media broadcasts showed police arresting several allies waiting for him at Vnukovo, despite temperatures of around -20 degrees Celsius (-4 degrees F), including politician and lawyer Lyubov Sobol and Ruslan Shaveddinov, who works for Navalny’s Anti-Corruption Foundation.

Before departing Berlin, Navalny had thanked all the other passengers on his flight, according to a live feed from TV Rain. “Thanks to you all, I hope we will get there fine,” he said. “And I’m sure everything will be absolutely great.”

“Doctors and nurses. Physical therapists and police officers. A lot of cops. The neighbors who invited us to drink, and those who allowed us to rent. Politicians and lawyers. Shopkeepers. Journalists. The prosecutors who interrogated me on requests from Russia. Coaches. Teachers. And even, once, the Chancellor. I had quite a wide circle of friends here. And I can only say a huge thank you to everyone.”

What’s next for Navalny?

Navalny, who has been detained by Russian authorities many times, was placed on the country’s federal wanted list during his time in Germany at the request of the FSIN, which in December accused him of violating probation terms in a years-old fraud case that Navalany dismisses as politically motivated.

Now the FSIN alleges that Navalny has been in violation of the terms of his suspended sentence by failing to show up for scheduled inspections.

The FSIN has requested that the court replace his suspended sentence with a real prison term. A hearing has been scheduled for January 29, and if the request is satisfied, Navalny will likely be jailed for 3.5 years.

In 2014, Navalny was found guilty of fraud after he and his brother Oleg were accused of embezzling 30 million rubles ($540,000) from a Russian subsidiary of French cosmetics company Yves Rocher. While Navalny was given a suspended sentence, his brother was jailed.

If Navalny is not convicted later in January, he will still face an investigation for a newer fraud case, in which he and his Anti-Corruption Foundation have been accused of misusing donations from supporters.

Alexey Navalny in hospital in Berlin, Germany, on September 15, 2020.

Putin, who refuses to acknowledge Navalny as a legitimate opponent, has described the extensive media coverage and investigations into the poisoning as a fabrication by Western intelligence, and said in December that if Russian security services had wanted to kill Navalny, they “would have finished” the job.

“The situation with Navalny looks like two trains running towards each other at full speed, bound to collide,” said Tatyana Stanovaya, a visiting fellow, also at the Carnegie Moscow Center. “There will be many victims.”

Attacks on Navalny’s allies have indeed continued. Pavel Zelensky, a cameraman with Navalny’s Anti-Corruption Foundation, was arrested Friday and will be detained until the end of February.

According to Agora, a Russian human rights organization, Zelensky was accused of extremism for tweets from September, in which he blamed the government for journalist Irina Slavina’s self-immolation. Before taking her own life, Slavina blamed pressure from Russian law enforcement for her decision to self-immolate.

CNN’s Claudia Otto and Fred Pleitgen contributed to this report.