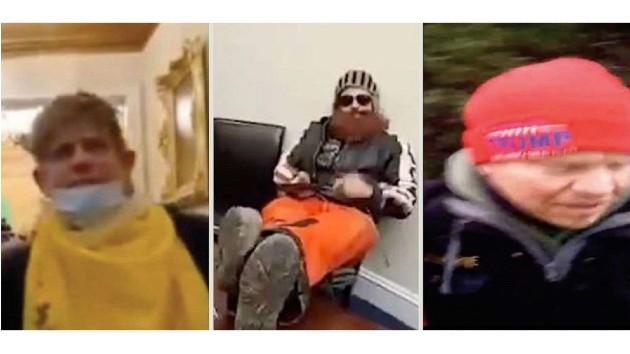 (WASHINGTON) — As authorities continue to pursue individuals who participated in the Jan. 6 insurrection at the United States Capitol, a growing number of those charged are employing a new defense: blaming the police for letting them in.

At least 29 people arrested for their role in the Jan. 6 events have claimed they thought they were free to enter the Capitol because law enforcement authorities either didn’t stop them from coming in or never told them they were not allowed to be there, according to affidavits and court filings reviewed by ABC News.

“He was not at the front of the lines, he didn’t see barricades being knocked down, he didn’t see officers getting assaulted, he didn’t see anything other than large crowds at the Capitol,” Thomas Mayr, the lawyer for Christopher Grider, one of the people accused of participating in the riot, told ABC News. “He went through an open door.”

Grider, of Texas, is one of dozens of suspected rioters who claimed to be unaware they were not allowed inside — some of whom argued that they were actually ushered in by officers. He now faces multiple charges including violent entry and disorderly conduct on Capitol grounds.

Jacob Lewis of California told investigators he was never told that he could not enter the Capitol, and that he was “escorted” by police into the building. When reached by ABC News, Lewis said he would be releasing video footage to “back up his story.” He declined to share the video with ABC News. Lewis was indicted on four misdemeanor charges, including disorderly and disruptive conduct in a restricted building.

Even as scrutiny of Capitol police continues to build, experts say it is unlikely such a defense will work in most situations.

“In general, ignorance of the law is not an excuse for criminal behavior,” said Taryn Merkl, senior counsel in the Justice Program at the Brennan Center for Justice and a former federal prosecutor in the Eastern District of New York.

Many accused rioters also face multiple charges for crimes they allegedly committed once inside the building, which experts say would render their claims of legal entry meaningless.

“Whether or not people knew that it was not lawful to enter the grounds as they did, many are charged with parading, demonstrating, or picketing — and that is prohibited, and no intent is required,” Merkl said.

Brandon Fellows, for example, told investigators he did not think he was going to get in trouble because the police officers seemed to be “on our side,” but he was later seen with his feet up on the desk of Sen. Jeff Merkley, D-Ore.

“Even if the officer had permitted him in the rotunda area or somewhere that might conceivably be a public space, anybody knows that breaking into a private senatorial office is wrongful, and would obstruct the administration of government,” Merkl said.

U.C. Berkeley law professor Charles Weisselberg, a former public defender, said the defense might help those charged with crimes where intent is required.

“If someone believes that they are allowed to do something, it might negate the intent that’s otherwise required to convict,” Weisselberg told ABC News. “Whether it is successful or not depends on the facts, what they heard, saw, and believed, but I could see that being presented.”

Merkl, however, noted that the majority of the rioters are charged under specific statutes that apply to the protection of the Capitol, for which prosecutors don’t have to prove intent on the part of the accused.

“If I leave my door open to my house, you can’t bolt in, even though I left the door open,” Shakhnevich said. “It’s still trespassing … and making the argument that I impliedly consented to access by leaving my door open is silly.”

Still, claims by those who say they were unaware they were committing illegal acts could sharpen the distinction between Trump supporters who may have gotten swept up in the moment and hardened extremists who went to the Capitol with plans to commit violence. An ABC News analysis of court records, military records, interviews and available news reports found that at least 19 of those arrested have associations or possible ties to extremist groups, including the Proud Boys, Oath Keepers and Three Percenters. Numerous individuals associated with those groups have since been charged with conspiracy.

And while some accused rioters say they believed law enforcement allowed them to enter, others are saying they believed they were acting under direct orders from then-President Donald Trump, who told his supporters at the rally before the attack that they should “fight like hell” and that he would be joining them on their march to the Capitol.

An ABC News analysis found at least a dozen rioters have mounted such a defense, a point that was raised multiple times by Democrats as they sought last week to convict Trump on charges that he directly incited the mob.

Weisselberg said that authorities prosecuting accused rioters will likely dispute such claims by pointing directly to what the rioters observed upon arriving at the Capitol.

“You’re looking at the location where they entered, you’re looking at the time that they entered, you’re looking to see whether it would have appeared that that they were entering a restricted space,” Weisselberg said. “The prosecution might counter with other facts, arguing that for a person who came up to the building at this particular location, they actually couldn’t have believed that they were entitled to enter because they saw broken glass, damage, and other things that should have been apparent to this person entering at that particular point in time.”

The claims, whether successful or not, bring a renewed focus on the conduct of police that day. In the aftermath of the attack, officials began questioning why law enforcement was not better prepared, and numerous investigations have been opened in the weeks since.

Earlier this week, Speaker of the House Nancy Pelosi announced that Congress would create an outside commission to investigate the riot, including “the preparedness and response of the United States Capitol Police and other Federal, State, and local law enforcement in the National Capitol Region.”

The Senate is scheduled to hold its first hearing into the security preparations leading up to Jan. 6 next week, and has called current and former officials responsible for securing the U.S. Capitol building to testify.

Bryce Lowry Caldwell, an attorney for one of the alleged rioters, told ABC News they were “looking into” the actions of the Capitol Police as a possible defense.

“Numerous individuals have been charged for being on a piece of property when they shouldn’t be,” he told ABC News. “If someone let them on … that’s an issue.”

Caldwell’s client, Jordan Revlett, had posted on Snapchat that “a capitol police officer opened the door from inside to let us in,” according to the FBI affidavit. Revlett also told investigators he “did not see any signs that would have restricted his entry” and that “a police officer was standing behind the door he entered, who did not try to stop his entry.”

“There’s several other defendants who said the same,” Caldwell told ABC News. “I would feel safe to say that’s an issue the Department of Justice would be looking into.”

When asked for comment, a DOJ official referred ABC News to its previous statements that “any individuals who intentionally committed a crime that day will be charged.”

Investigations have since been opened into the actions of 35 Capitol Police officers, a congressional official told ABC News, and at least two officers have been suspended, according to Rep. Tim Ryan, D-Ohio.

Other officers have been honored for their heroism in protecting the Capitol during the attack, which left five dead, including a Capitol Police officer, and injured dozens of officers.

Capitol police did not respond to ABC News’ request for comment.

Nevertheless, Merkl said, “the actions of the government aren’t on trial in a criminal case. What’s on trial is the action of the defendant.”