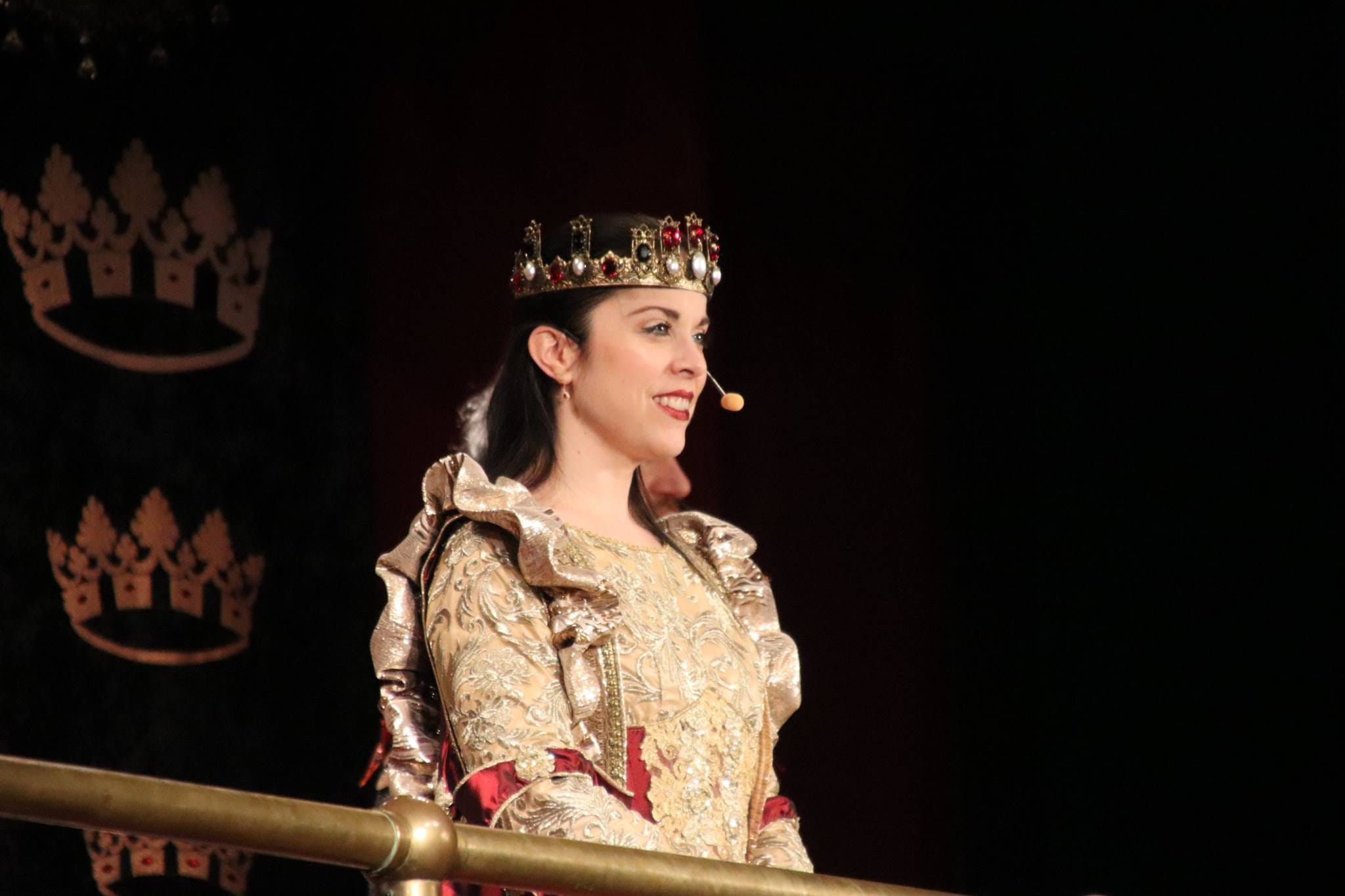 This as-told-to essay is based on a conversation with Erin Zapcic, who portrays a queen at dinner-attraction Medieval Times. It has been edited for length and clarity.

It was not lineage nor marriage that solidified my role as queen. My royal journey up the ranks was far less glamorous.

It was 2011 and at the age of 27, I had just gotten laid off from my office job. Having no idea what to do next, my mother suggested I take a ride over to Medieval Times, since it was just down the street from where I lived in Lyndhurst, New Jersey, and see if they were hiring.

I’m a trained actor who’s worked countless waitressing jobs over the years. I’d grown tired of waiting tables, so I made my way over to the castle and filled out an application.

Not long after, I was hired to work as a salesperson in the gift shop

My official title was “wench.” In recent history, the term has taken on a negative connotation, but during the medieval period, a wench simply meant a woman of common birth. The term never really bothered me, though some people were definitely uncomfortable with it.

Like all staff, I was required to remain in character throughout my shift. We were always instructed to refer to customers as “My Lord” or “My Lady,” which went over very well with our guests.

Though the position only paid minimum wage, which was $7.25 in New Jersey at the time, it was the only position I’d ever had that I actually liked. Two weeks into the role, I remember wishing I could afford to keep it.

As luck would have it, around the same time, I was approached by the retail manager to cross-train at the castle’s bar since I had previous bartending experience. I jumped at the chance because that extra $25 to $50 in cash each week was just what I needed to remain working there.

Within a month, the bar supervisor position opened up and I was promoted

By this point, I’d let the show cast manager know that I was an actor and if there was ever an opportunity to audition to be a part in the show, I’d be interested.

Five months into working at the castle, three of the four princesses in the cast left their jobs, all moving on within the span of a month. That’s when the cast manager basically said: “We need you.” Who’s going to say no to becoming a princess, right?

I auditioned and got the part. Within a week, I joined the cast.

Despite being elevated from bar wench to princess, there were times I still tended bar 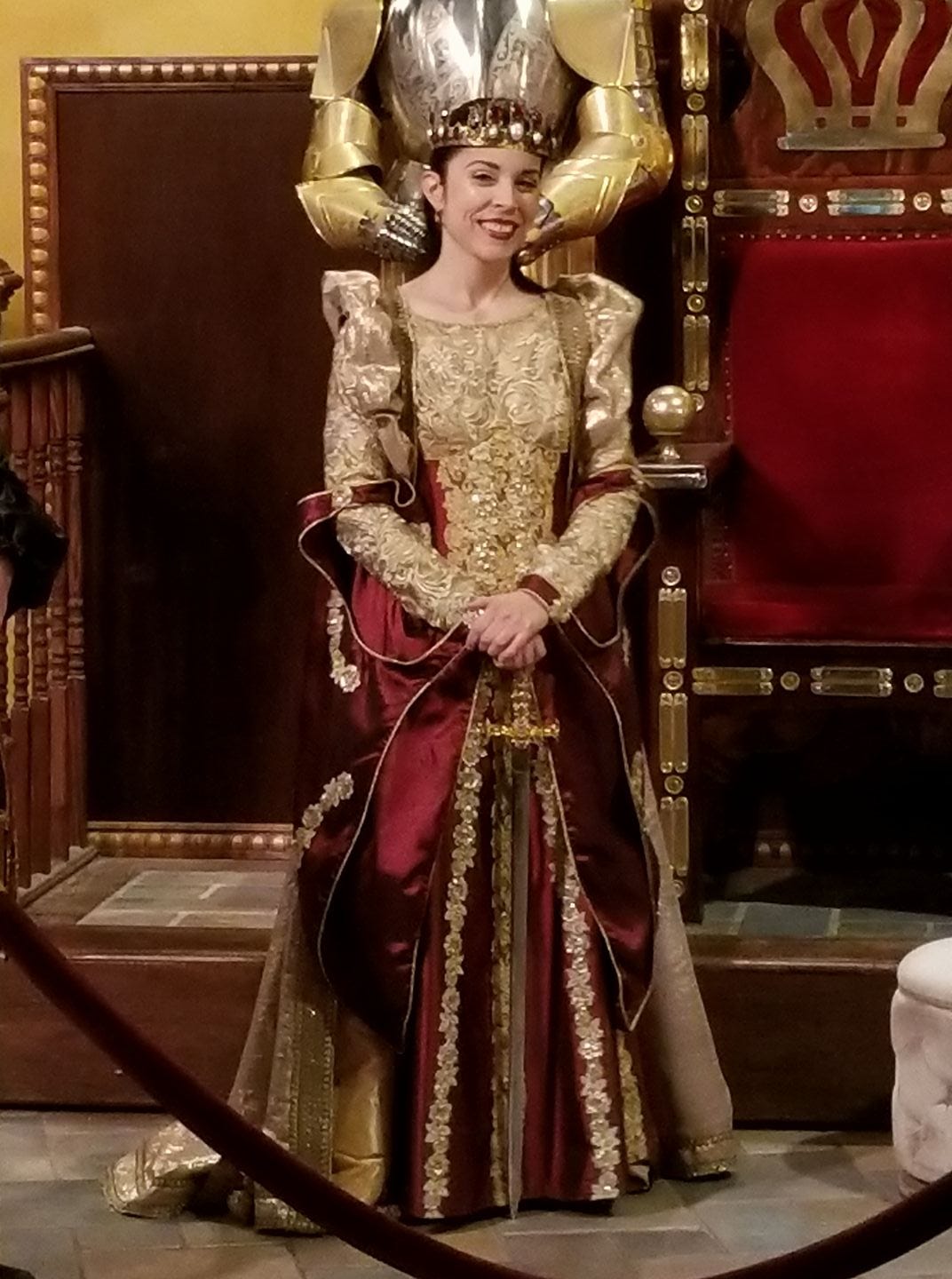 Over the years, I also worked in the administrative office as the main receptionist and helped out in marketing and group sales, too. By January 2018, one of the only jobs I had yet to do was serve chicken.

Then that month, after 34 years in business, for the first time in the company’s history, Medieval Times introduced the role of queen as the sole ruler and master of ceremonies. I had the distinct honor of being cast as the first queen of the Lyndhurst castle.

I decided to move to California after that. Still wanting to continue my work with Medieval Times, I reapplied at the Buena Park castle.

Initially, there was no room on the cast roster, but miraculously within two weeks of applying, the role of the queen became available. Before I knew it, I was once again donning the crown. I still do it today, although it’s no longer my full-time job.

These days, I perform in 2 or 3 shows a week

I also have a required weekly riding lesson and dress rehearsals.

My costume consists of a cape and dress that has slits in the front to accommodate riding the horse. I also wear leggings for both practicality and modesty, along with riding chaps and boots.

While the costume and the crown are provided, I’m responsible for my own hair and makeup.

A year ago, I fell off my horse during the show

It turns out the saddle wasn’t on tight enough, and every single fail-safe somehow managed to fail that day. I tumbled to the ground as the horse ran away, and my crown went flying off.

As I stood up, I remember thinking: “Where is my crown? I need my crown.” That’s when I noticed the guy who caught my horse was standing there holding my crown in his hand.

At that moment, with all eyes on me, I dusted myself off, threw my hands in the air, and retrieved my crown, placing it back in its rightful place on top of my head.

The crowd went wild, and we went on with the performance.

After my fall, I went to the medical center to get checked out

Thankfully, nothing was broken. I just had a lot of bruising since I’d hit the stirrups on the way down. I wound up needing physical therapy for six weeks and didn’t ride a horse for two months until I was cleared for lessons again.

I was lucky it wasn’t worse, because in reality, it’s a dangerous job — end of story. I have friends who’ve had freak accidents on the job and gotten really hurt. Still, it never even occurred to me not to finish the show.

While I love my job, there are certain aspects of it that could use improvement That’s why, in addition to playing the lead in the show, behind the scenes I also led the recent efforts to successfully unionize. Buena Vista became the second castle to do so, after my original castle in Lyndhurst did back in July.

We do more shows than any other castle, which is an issue on so many levels. Before COVID-19, we did multiple shows seven days a week — which is even more than Broadway — even though we’ve been told by management: “You’re not Broadway. It’s dinner theatre.”

On November 10, we officially unionized in the hopes of improving our living wages and working conditions. It wasn’t easy, and this is only the beginning.

I love my job and am in no way ready to give up the crown or the fight for those whose livelihoods depend on these issues being addressed fairly, so while I hope leading our unionization efforts isn’t the end of the road for me in the castle, if it is, at least I feel like I did something. I’ve made my peace.