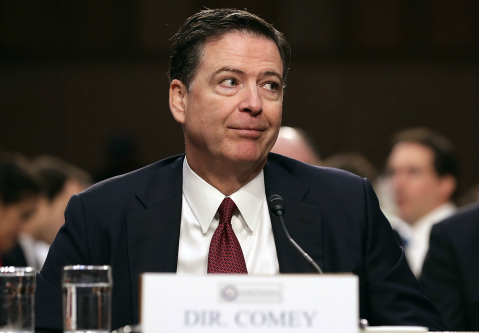 The Treasury Inspector General for Tax Administration determined that the IRS randomly selected Comey and McCabe for audits of their tax returns from 2017 and 2019 as part of a program the IRS uses to refine its technology, according to a report released Thursday. The watchdog found no evidence of malfeasance on the part of Trump or any Trump-appointed officials.

It’s the latest media-propelled narrative disproved by federal watchdogs. The Department of Homeland Security’s inspector general exonerated border patrol agents who were accused in the liberal media of whipping Haitian migrants as they crossed into the United States from Mexico. The Justice Department’s inspector general debunked the infamous Steele dossier, which the media cited as evidence that the Trump campaign conspired with Russia to influence the 2016 election.

The audits of Comey and McCabe, which the New York Times reported on July 6, fed the narrative that Trump sought revenge on Comey and McCabe for opening an investigation into his campaign in 2016. According to the Times, Comey and McCabe were subject to “intensive” audits of their tax returns from 2017 and 2019. The paper followed up with an analysis of the audits and determined that there was a “minuscule” chance that the audits were random.


Comey and McCabe said they believed they were targeted for the audits.

“Maybe it’s a coincidence or maybe somebody misused the IRS to get at a political enemy. Given the role Trump wants to continue to play in our country, we should know the answer to that question,” Comey said.

“The revenue agent I dealt with was professional and responsive,” McCabe said. “Nevertheless, I have significant questions about how or why I was selected for this.”

Michael Schmidt, the Times reporter who broke the story, said in an MSNBC interview that because of Trump’s “continued harping” on Comey and McCabe, “it’s hard on the face of it to simply accept that this is random.”

Schmidt and MSNBC host Chris Hayes further suggested that then-IRS commissioner Charles Rettig, a Trump appointee, may have had a hand in the audits. Schmidt noted that Rettig had supported Trump’s argument to withhold the release of his tax returns during the 2016 campaign. He also said that Rettig “owns two properties at a Trump property in Waikiki, Hawaii.”

“Because of Donald Trump’s continued harping on these two individuals, it’s hard on the face of it to simply accept that this is random,” says @nytmike on the IRS audits of James Comey and Andrew McCabe. https://t.co/uQnXM3hfcn


But according to the watchdog report, Rettig was appointed months after the audit program that selected Comey and McCabe started. Rettig told the inspector general’s team that he had no discussions with the Trump administration regarding the audit program.

CNN, too, pushed the conspiracy theory that Trump was behind the audits. Pundit Chris Cilizza wrote that “it’s *very* hard to see the audits of former FBI officials as coincidence.” McCabe, a CNN law enforcement analyst, told CNN’s Don Lemon it was “scary to be targeted” in an audit.

Comey’s and McCabe’s claims to have been unfairly targeted by the federal government marks an ironic twist given their mishandling of the investigation into the Trump campaign and Russia. Both signed off on surveillance warrants against a Trump campaign adviser that were based on faulty information from the Steele dossier. The Justice Department’s inspector general found that the FBI failed to verify information in the dossier, which was funded by the Hillary Clinton campaign, before using it as part of the investigation into the Trump campaign.

Trump fired Comey on May 10, 2017, after Comey publicly testified that the FBI was investigating the Trump campaign. McCabe was fired from the FBI in 2018 after the Justice Department’s inspector general found that he lied to federal investigators about his role in a leak of information about a bureau investigation into the Clinton Foundation.